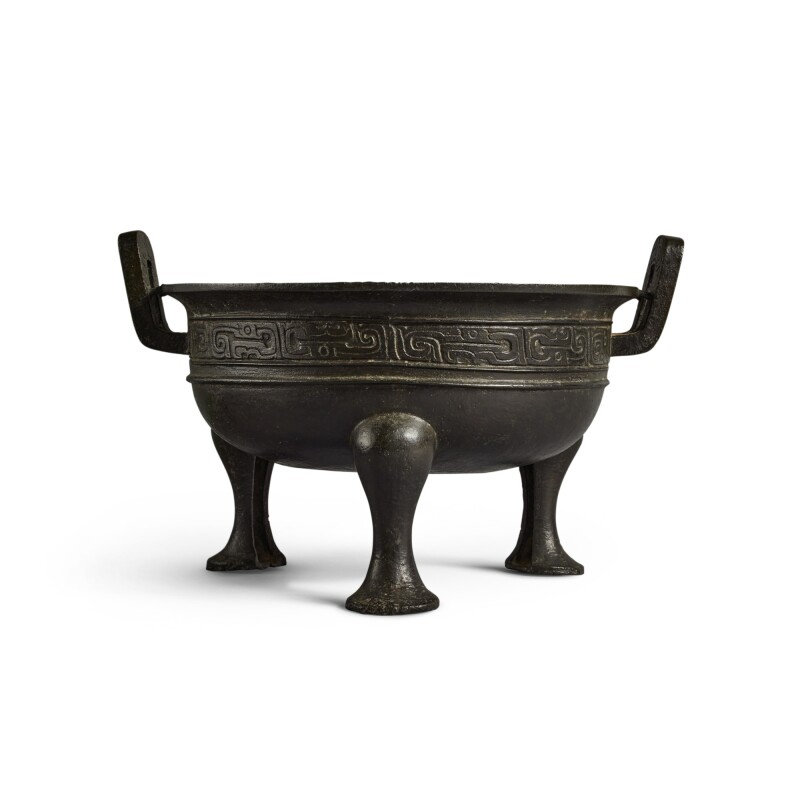 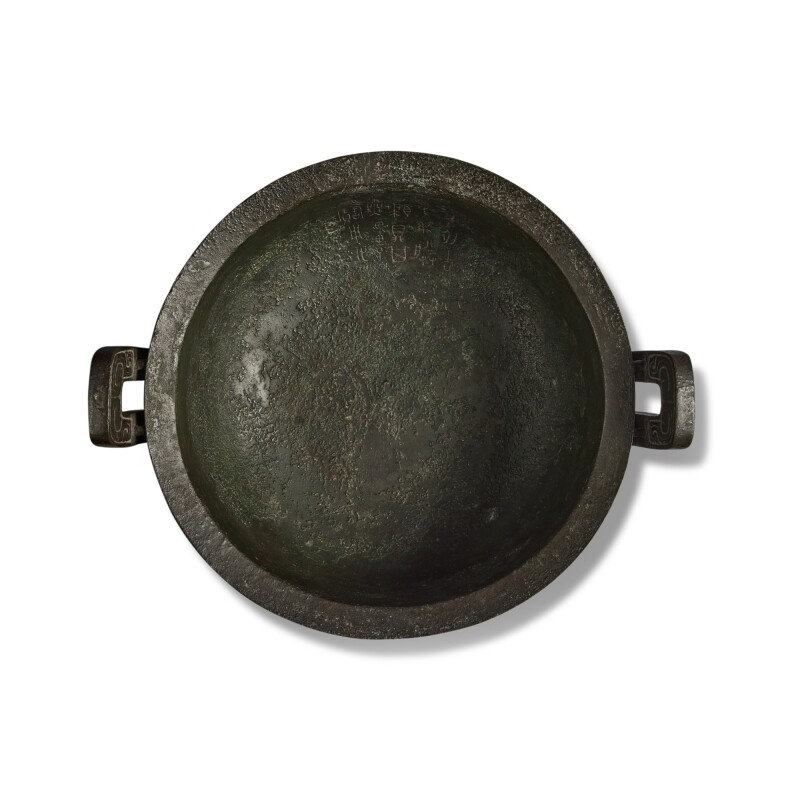 Note: This well-published ding belongs to a small group of surviving bronzes from the Dai state. The Dai state was one of the vassal states of the Zhou dynasty, located in Kaogcheng county, which includes the regions of today’s Minquan and Lankao counties, Henan province. The state is believed to have been founded by the descendants of the Zhou royal family. Little is known about the Dai state due to the lack of historical texts from classical literatures. Bronze inscriptions, therefore, constitute a very important source of information in the study of the Dai state.

The inscription on this vessel can be translated to ‘on the gengshen day, chuji, eighth month, Dai Shu Zhen made this rice ding for himself, for his longevity, to be treasured, and for the eternal use of his sons and grandsons’. Two other ding from the same set as the present vessel are known. One from the Qing court collection, later collected by Xu Naichang (1869-1946) and Liu E (1857-1909), is now in the Design Museum Denmark, Copenhagen. The second is recorded as having been formerly in the collection of Tang Lan (1901-1979). Its current whereabouts are unknown. Both ding are published in The Institute of Archaeology, Chinese Academy of Social Sciences, ed., Yinzhou jinwen jicheng [Compendium of Yin and Zhou bronze inscriptions], Beijing, 2007, nos 02691 and 02692, respectively.

In addition to the ding set, three bronze fu are recorded in ibid., nos 04620-22, each cast with a two-character name 'Shu Zhen' in the inscription. One is in the Palace Museum, Beijing; another is preserved in the Shanghai Museum, Shanghai; and the third is known only from its inscription. Guo Moruo suggests in Guo Moruo quanji [Compendium of the works by Guo Moruo], Beijing, vol. 8, 2002, p. 473, that based on the style of the inscriptions, the Dai Shu Zhen ding and the Shu Zhen fu belonged to the same owner.

Some scholars have attributed the ‘Dai Shu Zhen’ and 'Shu Zhen' vessels to early Spring and Autumn period. Others, however, have suggested an earlier attribution. Wu Qichang studied the dated inscription of the Dai Shu Zhen ding and the Shu Zhen fu and concluded that both vessels were made during the period of the Gonghe regency (841-827 BC), an interregnum period during the late Western Zhou after King Zhou Li was exiled due to his tyranny in ruling the empire (see Jinwen lishuo shuzheng [Critical examination of calendars in bronze inscriptions], Shanghai, vol. 4, 1934. pp 37-40). Wu's view has been shared by Wu Zhenfeng, who states in his book that Dai Shu Zhen was from the late Western Zhou dynasty, and he was a royal family member of the Dai state (Jinwen renming huibian [Compilation of the names from bronze inscriptions], Beijing, 2006, p. 111). Zheng Qingsen further notes in his article that Dai Shu Zhen was in fact the king of the Dai state (‘Gudaiguo kaolue [Study of the ancient Dai state]’, Xungen, Zhengzhou, 2017, no. 4, p. 95).

Two other related vessels from the Dai state are known, both of which are attributed to the early Spring and Autumn period. A bronze li, inscribed with a nine-character inscription indicating that the vessel was made by Dai Shu Qing Fu for his wife Shu Ji, is published in Ma Chengyuan, Shang Zhou qingtong qi mingwen xuan [Selection of Shang and Zhou dynasty bronze inscriptions], Beijing, vol. 3, 1988; and a bronze yi, inscribed with the name Dai Bo, is published in Wu Zhenfeng, Shangzhou qingtongqi mingwen ji tuxiang jicheng [Compendium of inscriptions and images of bronzes from the Shang and Zhou dynasties], vol. 26, Shanghai, 2012, no. 14951. Both Dai Shu Qing Fu and Dai Bo are suggested by Zheng Qingsen in his article as the kings of the Dai state (see op. cit., p. 95); however, Zheng further notes, it is still difficult to fully understand the genealogy of the Dai family with the limited materials at present (p. 98).

The downfall of the Dai state accompanied the collapse of the Western Zhou dynasty. The dramatic end of the Dai state is documented in Zuozhuan (Commentary of Zuo). On the 10th year of Duke Yin of Lu (713 BC), the Zheng state rallied allies to attack the Song state. To combat the Zheng, the Song state sought help from the Wei state and launched a joint military campaign against the Zheng. During the campaign, the Song and the Wei made a critical mistake: they abandoned their initial target, and instead, invited the Cai state to attack Zheng’s neighbor, the Dai state. This gave the opportunity for the Zheng troops to safely withdraw from the Song territory and besiege the armies of the Song, Wei and Cai at the Dai capital. In the 8th month, the Zheng army defeated the three states, and at the same time, conquered the Dai state.

The form of the present ding is typical of the late Western Zhou and early Spring and Autumn periods. Compare a set of nine ding of very similar form and design, excavated in Jingmen city, Hubei province in 1966, attributed to the transitional period between late Western Zhou and early Spring and Autumn, published in Li Boqian, Zhongguo chutu qingtongqi quanji / The Complete Collection of Bronzes Unearthed in China, Beijing, 2018, pl. 185, together with three other similar examples, pls 186, 192 and 194; and another, the Chen Hou ding, attributed to the early Spring and Autumn period, in the Palace Museum, Beijing, published in The Palace Museum, ed., Gugong qingtongqi / Bronzes in the Palace Museum, Beijing, 1999, pl. 221.