Zetterquist Galleries's March 2022 exhibition will feature Chinese ceramics from the Tang through Yuan dynasties. It features exquisite examples of celadons from Yaozhou, Yue, and Longquan kilns. There is an exquisitely carved Yaozhou peony bowl from a New York collection and an heirloom-quality Longquan celadon vase from an old English collection. There are persimmon-glazed bowls from Yaozhou and Jian-yao kilns, as well as a tortoiseshell censer from Jizhou. Of the many white wares in the exhibition, there is a carved Dingyao twin fish bowl with Japanese provenance and a Tang dynasty Xing-yao bottle vase from a distinguished New York private collection and provenance from Robert Hatfield Ellsworth and AW Bahr Collections. Two Song dynasty Hutien-type Qingbai bowls, one with original silver foil rim remnants, and the other with carved cloud motif, portray the refinement of this kiln's output. 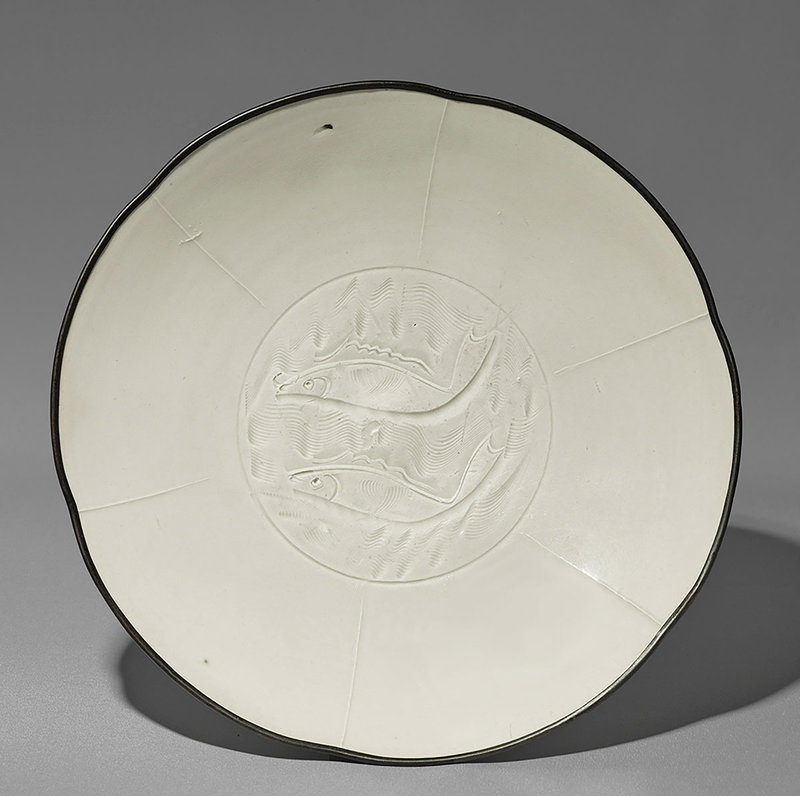 A foliate-form porcelaineous stoneware plate with six sections separated by raised ridges, and the six petaled rim has an old metal binding.  The interior center has an exuberantly carved depiction of two fish swimming in tandem among waves.  The entire piece is covered with a translucent ivory colored glaze that pools to a taupe color, typical of Ding ware pieces of the period.  The neatly molded foot-rim is also glazed.

A similar example from the National Palace Museum in Taipei and published in their 2014 publication “Decorated Porcelains of Dingzhou” pg. 82.  Another is illustrated in Jan Wirgin’s “Sung Ceramic Design” fig. 34 (6). 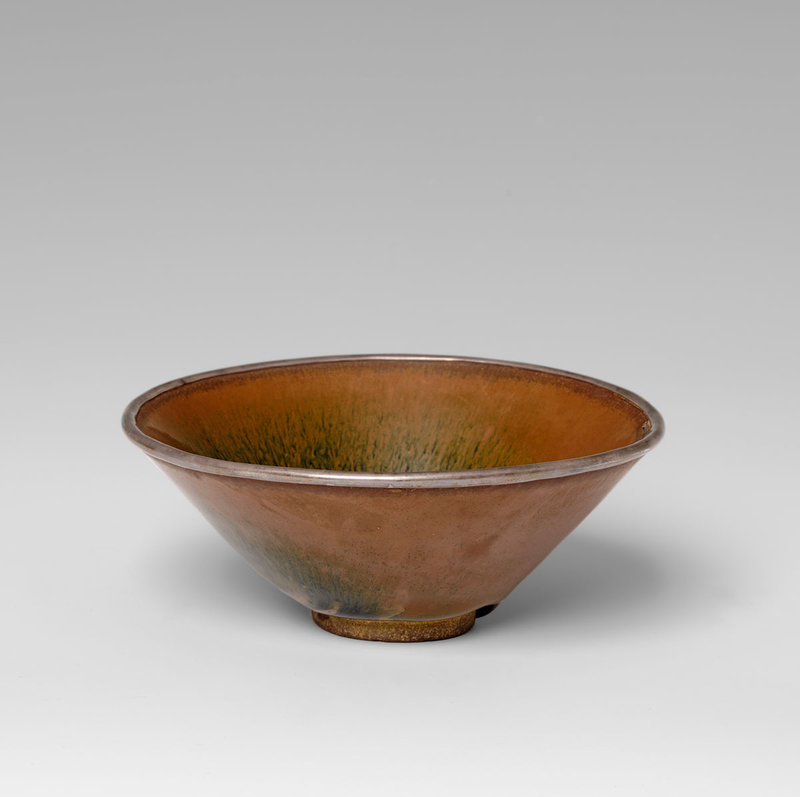 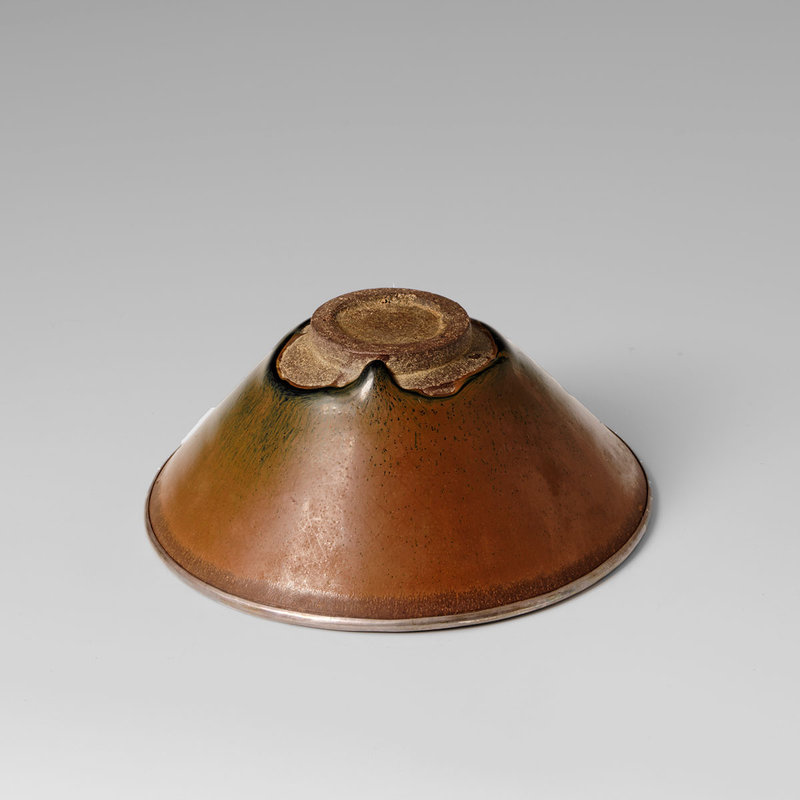 A stoneware tea bowl with steep sides and primarily persimmon colored glaze that streaks in a “Hare’s fur” pattern into a blackish brown color towards the bottom interior, where it pools to black.  The glaze is similarly streaked around the exterior, where if pools above the foot-rim, revealing a dark grey stoneware body, small straight solid foot, and very shallow under-foot well.  The rim is covered in a silver band, typical of these wares used in the Japanese tea ceremony.  With fitted wooden box.  Repaired glaze crawl on internal rim (old repair).

This form of tea bowl, more conical than rounded, was used in warmer weather, as it allows the heat to escape the tea more quickly.  In Japan, it would have been used for a less formal “usu-cha” tea ceremony. 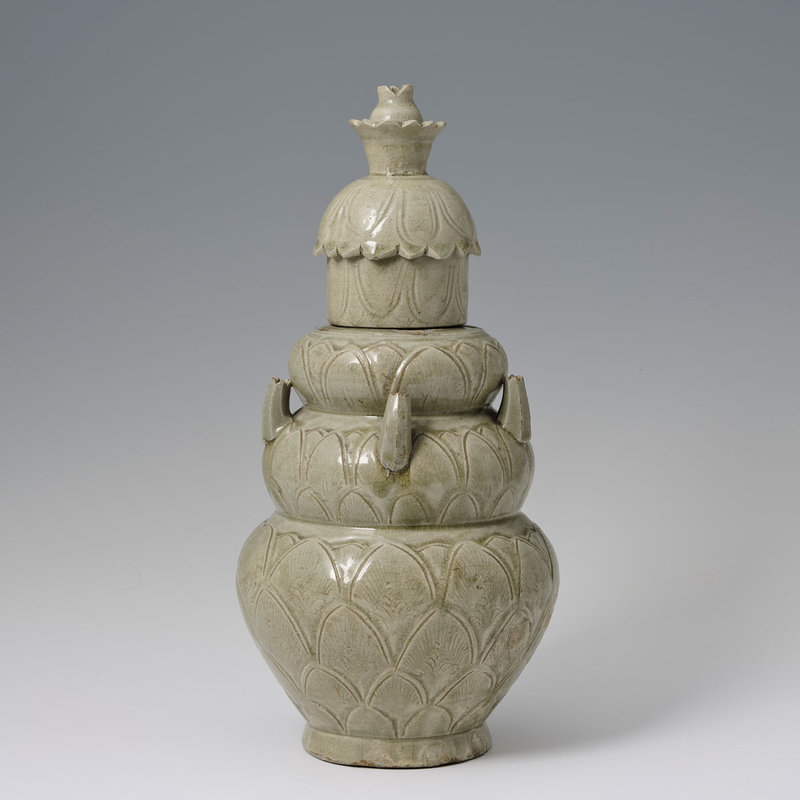 A three-tiered vessel with the bottom tier of a baluster form sitting on a splayed foot.  The center tier is a compressed form with five faceted faux-spouts rising from its shoulders.  The top tier has a similarly compress form and is surmounted by a high collar cylindrical neck.  All three tiers are decorated overall with carved overlapping lotus petals.  The domed lid has a cylindrical bottom and  foliate form skirt below the carved dome and at the top of the finial.  The finial is inset with a small jar form.  The entire piece is covered with a dark green finely crackled and translucent celadon glaze.  It is in overall excellent condition with expected glaze wear and scratches and an approximately 1 cm chip to the top of the lid finial.

Two similar forms (but with five tiers) are published in Sekai Touji Zeshu, Shogakukan, Tokyo 1977., Vol. 12.  Plate 174 for an example from the Tokyo National Museum, and fig. 50 illustrating a piece from Yamato Bunka Gallery, Osaka.

Collection of the Albright-Knox Art Gallery, Buffalo, NY, no. 1941:3 (Purchased through the Charles Clifton Fund in 1941.) A stoneware vase with bulbous body and a tall, thick neck and everted, shallow cup-shaped mouth-rim.  It is covered overall with a beautiful minty blue/green Longquan celadon glaze with a shiny surface, and feint broad crackle.  The piece sits on a straight foot that is unglazed on the bottom, revealing a pale grey clay body fired to a russet brown color.  The foot-well interior is entirely glazed, and bears the collection sticker of Henry Guinness de Laszlo (1901 - 1967), and one other inventory sticker.

There is an original firing crack on the interior bottom, above the foot.

A similar “kinuta” colored piece of same form and size published in Chinese Ceramics in the Karl Kempe Collection, Stockholm, 1964.  pl. 96.  Another similar example is published in Regina Krahl’s 1994 catalog of the Meiyintang Collection, Volume 1, no. 555. A large porcelain bowl with an exquisitely carved scene of two boys frolicking amongst foliage, (peonies of pomegranate type).  The masterful carving is done both with pointed and wedged instruments.  The entire bowl is covered in an idilic pale blue translucent glaze, leaving only the underfoot unglazed, revealing a white porcelain body with shadow of the cylindrical kiln support on which it was fired.  The rim is about half covered with its original silver band, now partially degraded.  Chips to foot rim. A porcelaineous stoneware bottle vase with baluster shaped body and a flat foot.  A beautifully proportioned, tapered neck rises from a cushioned indentation, which flares to a beveled mouth-rim.  The entire piece is covered in a translucent clear glaze that pools to a bluish green color where the neck meets the body.  There are two small smudges on the neck and one on the body where the potter held the piece while dipping it in the glaze.

A similar Ding-yao example is published in “Decorated Porcelains of Dingzhou; White Ding wares from the collection of the National Palace Museum”, Taipei 2014. pl. 1. 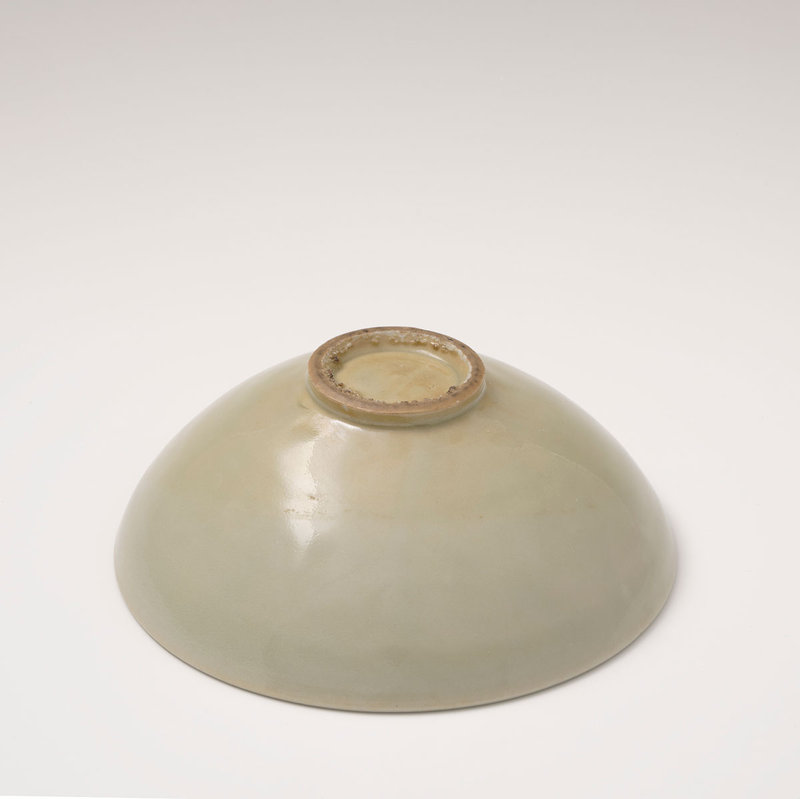 A round stoneware bowl sitting on a straight foot rim, unglazed at the very bottom and revealing a light gray clay body fired to a reddish brown color.  The bowl is covered overall with a pale green Yaozhou “Moon White” glaze, which thins to a creamy white color at the rim.  Excellent condition with minute kiln specs in the interior. 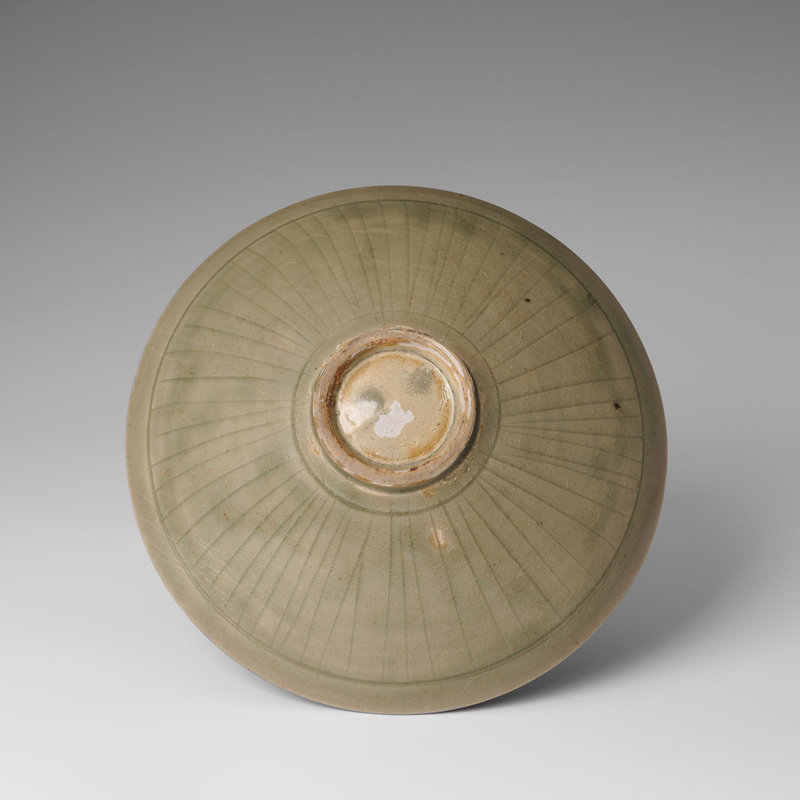 A large stoneware bowl with notched foliate rim and covered with a green Yaozhou celadon glaze.  The inside center and cavetto are carved with a dense floral pattern, which ends about one inch below the rim.  The underside is carved with striations and bottom of the foot is unglazed to reveal a light grey stoneware body partially fired to a russet brown color.

A very similar example from the George Harwood Collection is published in “Marvels of Celadon: The Shan Shan Tang Collection of Yaozhou Wares” The Art Institute of Chicago, 2019. pl. 82 A stoneware bowl, the inside of which is masterfully carved with a figure of a recumbent water buffalo staring up at the moon and passing cloud.  The figures are set within a double quattro-foil medallion, which is surrounded by floral sprigs.  The entire piece is covered with a translucent celadon glaze of an ideal dark green shade.  The foot rim is unglazed revealing a light grey stoneware body fired to a russet brown color.  A similar example is published in the Sekai Touji Senshu Vol. 13, plate 25, and belonging to the Nagatani Museum.  Another example with identical design is published in “Series of China’s Ancient Porcelain Kiln Sites: Yaozhou Kiln of China” Beijing 2014 pg. 199 pl. 159.  Another is published in “Ceramics Gallery of the Palace Museum, Part 1”  Forbidden City Publishing, Beijing. pl. 173.