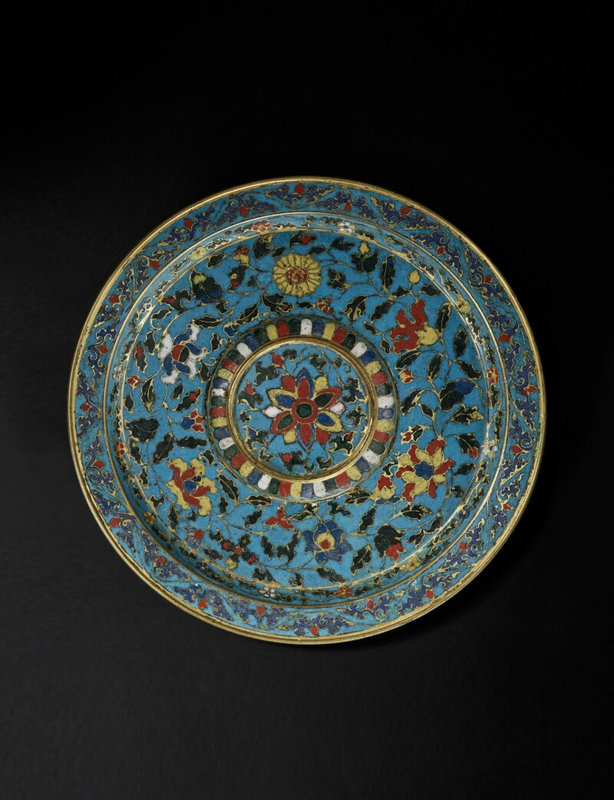 the base incised with a six-character mark filled with blue enamel within a circle.

Note: Xuande mark and period cloisonné enamel cupstands are rare. Compare a closely related example with a stylized lotus in the center and a wave border on the flanged rim with a similarly incised six-character mark filled with dark blue enamel within a circle, illustrated in Sir Harry Garner, Chinese and Japanese Cloisonné Enamels, London, 1962, col. pl. B and pl. 95A (mark). Another related example with a different lotus motif in the center and a similar blue-enameled mark was sold in our London rooms, 16th June 1999, lot 704.

Compare three further cupstands, but each with an incised double-outlined six-character mark: the first bears a similar twelve-petal 'floral' medallion, in the Pierre Uldry Collection, illustrated in ibid., col. pl. 22, later sold in our London rooms, 2rd July 1968, lot 49, then included in Helmut Brinker and Albert Lutz, Chinese Cloisonné: The Pierre Uldry Collection, London, 1989, no. 23; the second, with a 'lotus' medallion, is in the collection of the Palace Museum, Beijing, and is illustrated in The Complete Collection of Treasures of the Palace Museum: Metal-bodied Enamel Ware, Hong Kong, 2002, pl. 28; and the third, also with a 'lotus' medallion, was sold at Christie's Hong Kong, 26th November 2013, lot 3460.