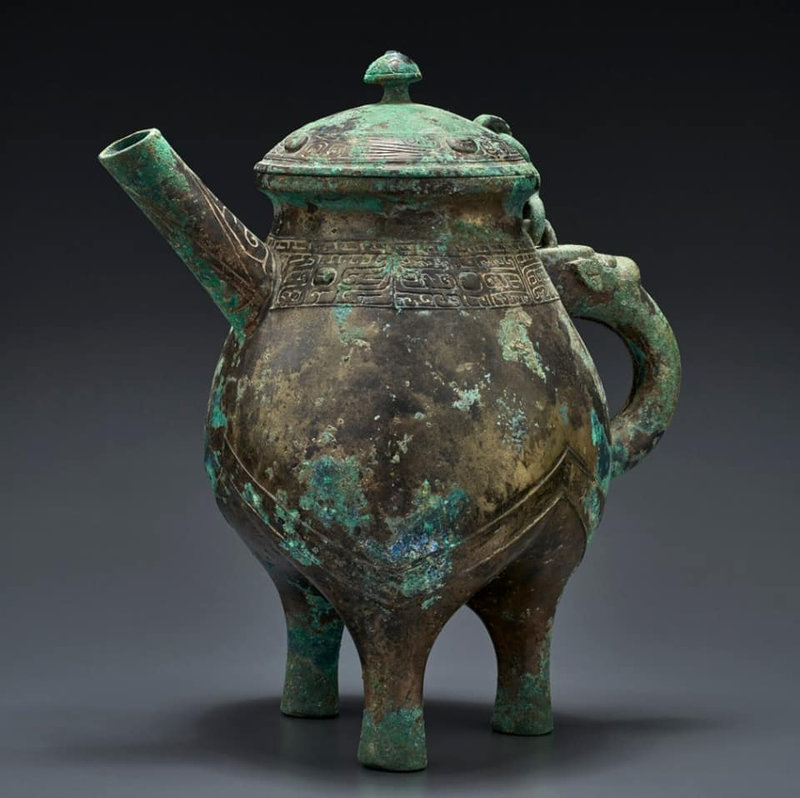 The pear-shaped body is subtly lobed and cast with a double-line border above the three legs. The neck is cast with taotie masks between the top of the handle and the diagonally upright spout. The domed cover is cast below the finial with further taotie masks, and has a single link that attaches the cover to the shoulder of the vessel. The interior of the cover and vessel are both cast with an inscription. The bronze has an olive-green patina with areas of malachite encrustation.

Property from the Estate of Don B Lichty, Honolulu.

Note: The inscription cast below the handle and on the inside of the cover reads ya tian X (possibly zi).

The tripod he form is based on Neolithic pottery prototypes, seen as early as the Erlitou culture (19th-17th century BC) and was made in bronze by the Erligang culture (16th-14th century BC). A Shang-dynasty Anyang-period version of the he form, with a tall egg-shaped body and small cover, from the tomb of Fu Hao, is illustrated by J. Rawson in Western Zhou Ritual Bronzes from the Arthur M. Sackler Collections, vol. IIB, Cambridge, 1990, p. 664, fig. 112.1. The present vessel is more representative of the late Shang-early Western Zhou period, with its smoothly divided tri-lobed body and wider circular cover attached with a single large link, and the spout rising diagonally from the shoulder opposite the C-shaped handle. The he evolved to a more squat form with shorter legs, more pronounced lobes and a wider, flared neck during the early to middle Western Zhou period.