the base with a six-character mark in underglaze blue inscribed in three columns within a double circle.

Note: Vibrantly painted in the doucai palette, the motifs adorning this dish brim with auspicious meaning indicating it was clearly intended as a birthday gift. During his six-decade-long reign, the Kangxi Emperor had refrained from organizing large birthday celebrations, except on the occasion of his 60th birthday in 1713, and in anticipation of his 70th birthday in 1723. The former was a truly grand national event which lasted weeks and involved numerous processions, performances and banquets, and the latter would have been similarly magnificent had the Emperor not died unexpectedly a few months before. Porcelain wares were produced specifically for these two occasions, and the imperial kilns at Jingdezhen began firing these wares years in advance. Peter Y.K. Lam has recently attempted to identify porcelain produced for these two events and has suggested that dishes of the present type were intended as gifts for the Emperor’s 70th birthday (see Peter Y.K. Lam, 'Myriad Longevity Without Boundaries. Some Qing Imperial Birthday Ceramics from Hong Kong Collections', Arts of Asia, vol. 40, no. 5, October 2010, pp 110-111). Lam notes the elongated and slightly rigid style in which the reign mark on these dishes is written and its similarity to Yongzheng period reign marks; thus suggesting that it represents a stylistic transition between the two reigns. 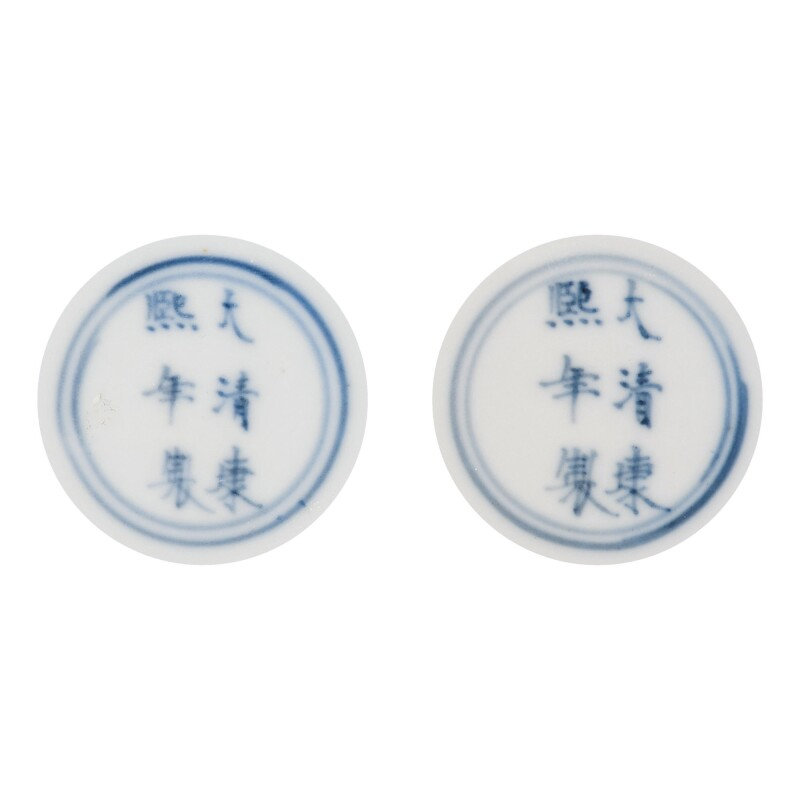 the base of each with a six-character mark in underglaze blue within a double circle.

Note: The present pair represents a rare variation of a group of finely potted and painted ‘birthday’ dishes, featuring auspicious themes of longevity, made at the imperial kilns in Jingdezhen most likely to commemorate the Kangxi Emperor's sixtieth birthday in 1713. Among this superlative group of wares, dishes of similar diminutive size with foliate rims are exceptionally rare, with no other published examples known. Related dishes depicting pairs of beauties holding offerings, but of larger size and with straight rims, include one in the Cleveland Museum of Art, Cleveland, illustrated in The Severance and Greta Millikin Collection, Cleveland, 1990, pl. 70; and a second example, formerly in the Elphinstone Collection, now on loan from the Percival David Foundation of Chinese Art to the British Museum, London, included in the Illustrated Catalogue of Ch'ing Enamelled Wares, London, 1973, pl. 890; and a pair in the Museum für Ostasiatische Kunst, Cologne, published in Porzellanschätze der Kangxi-Zeit / Porcelain Treasures of the Kangxi Period, Hetjens Deutsches Keramikmuseum, Dusseldorf, 2015, pls 7 and 8.

Compare also larger examples of this type with plain rims, one with a similar scene of attendants carrying a ewer and a jue, sold first at Christie's New York, 2nd December 1993, lot 293, and again in our Hong Kong rooms, 1st November 1994, lot 63; and another sold in these rooms, 15th September 1999, lot 87. 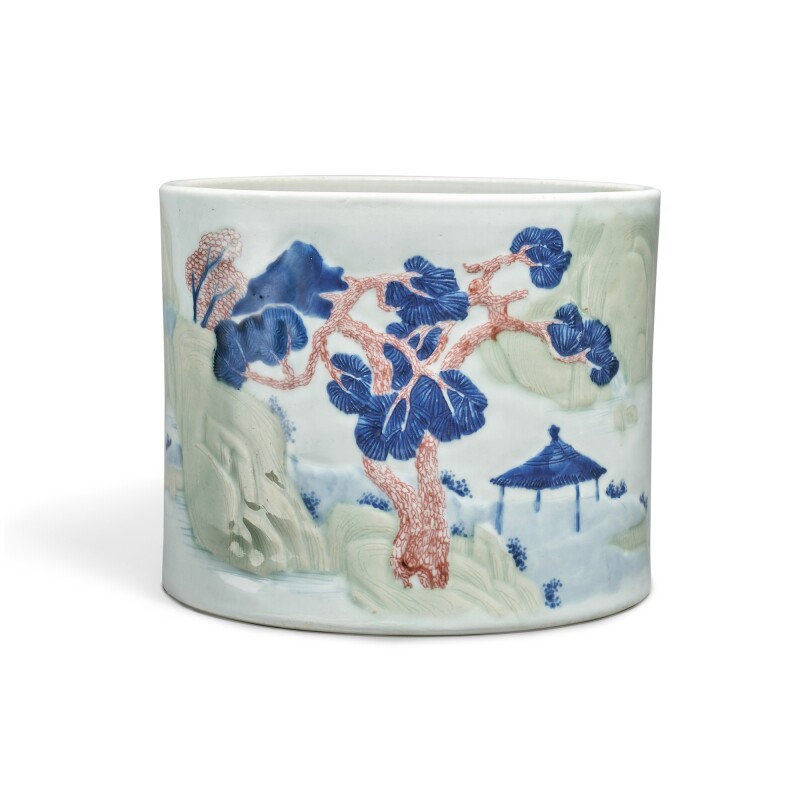 the base with a six-character mark in underglaze blue.

Exhibited: Exhibition of Ancient Chinese Ceramics from the Collection of the Kau Chi Society of Chinese Art, Art Gallery, The Chinese University of Hong Kong, Hong Kong, 1981, cat. no. 151.

Note: The potter’s ability to successfully fire underglaze blue, copper red and celadon on this brushpot is an exceptional achievement. The design was carved and incised into the body which served both an aesthetic and technical purpose to prevent the pigments from mixing into each other during firing. Copper-red was notoriously difficult to control, thus the addition of celadon glaze adds to the complexity of the firing and the rarity of vessels decorated in this palette.

Related brushpots, also inscribed with Kangxi reign marks and of the period, include one in the National Palace Museum, Taipei, illustrated in Gugong cangci / Porcelain of the National Palace Museum: Enameled Ware of the Qing Dynasty (Book I), Hong Kong, 1969, pl. 1, where the decoration is referred to as ‘underglaze three-colour’, p. 32; one in the Shanghai Museum, Shanghai, included in Kangxi Porcelain Wares from the Shanghai Museum Collection, Hong Kong, 1998, pl. 87; and two sold in our London rooms, the first, 20th April 1971, lot 64, and the second, 27th July 1971, lot 132. the base with a six-character mark in underglaze blue within a double circle.

Note: Although yellow-ground green-enameled bowls from the Kangxi reign are not uncommon, it is extremely rare to find such a design of cloud scrolls outlined in slip. Finely delineated, the slip detailing presents another technical challenge that the potter has successfully mastered.

A pair of similar bowls was sold in our Hong Kong rooms, 14th November 1989, lot 287. Another pair with deeper sides was sold in our London rooms, 10th November 2004, lot 667. Compare a similar bowl but with aubergine clouds on a green ground, illustrated in Kangxi, Yongzheng, Qianlong: Qing Porcelain from the Palace Museum Collection, Hong Kong, 1989, pl. 108. See another bowl with deeper sides, enameled with green clouds on a yellow ground but lacking the slip decoration, in the collection of the Tsinghua University Art Museum, Beijing. 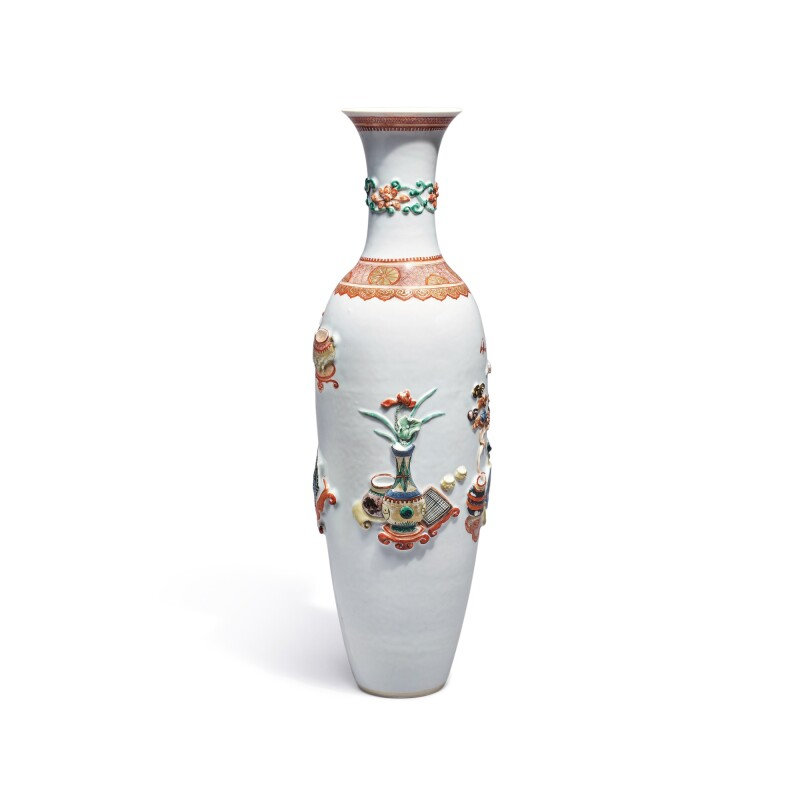 Note: The Kangxi period is recognized as a time of tremendous technical and aesthetic innovation in the arts. The potters of Jingdezhen readily responded to the artistic demands of the imperial household and new markets at home and abroad. It is typical of the period that a familiar, respected technique such as applique would be revisited and refined to an unprecedented degree. Previously, thick potting was required to provide a stable support for the applied decoration and the appliques themselves were prone to crack and shrink away from the body when cooling. The present vase evinces mastery over these technical challenges. The applied decoration, each element finely detailed and enameled, adheres superbly to the body, and is further enhanced by the painted decoration.

A similar vase, but of rouleau form, is in the Palace Museum, Beijing and illustrated in The Complete Collection of Treasures of the Palace Museum, Porcelains in Polychrome and Contrasting Colours, Hong Kong 1999, pl. 143. See also a pear-shaped vase with figural relief-decoration from the Jie Rui Tang Collection, sold in these rooms, 20th March 2018, lot 329.