An outstanding and finely enamelled famille-rose 'peach' charger, Mark and period of Yongzheng (1723-1735)

An outstanding and finely enamelled famille-rose 'peach' charger, Mark and period of Yongzheng (1723-1735) 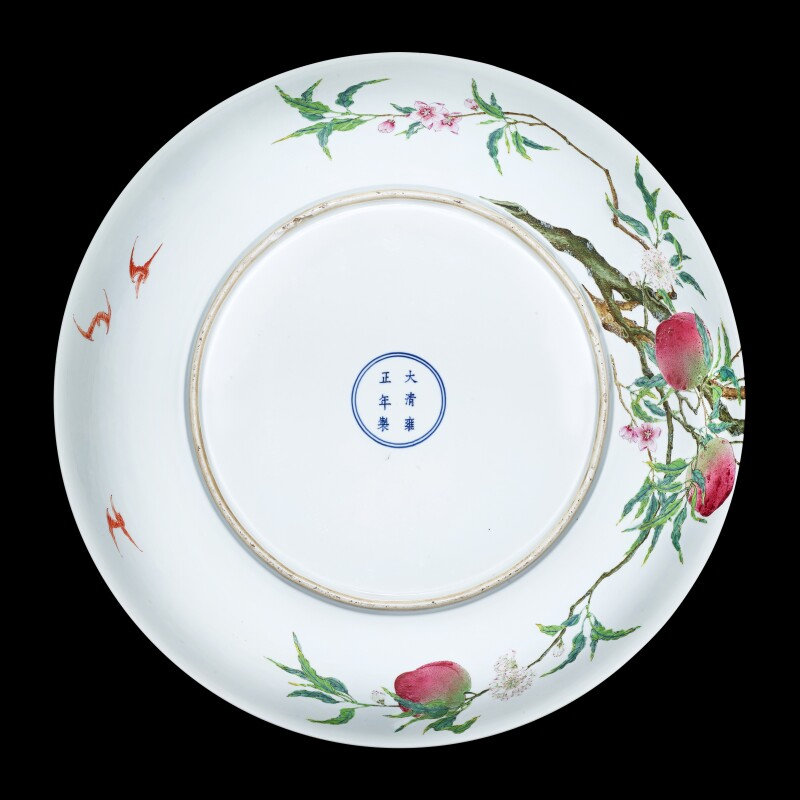 superbly decorated with two fruiting and flowering peach boughs, naturalistically depicted side by side and crossing over, each rendered rising from the footrim, with thinner branches extending halfway across the exterior, and continuing over the rim and on to the interior, one branch painted in pale olive-green with shades of grey and the other a finely shaded tan colour, the slender leaves curled over at the ends and softly enamelled in variegated tones of green with touches of blue and yellow, each of the eight peaches, five on the interior and three on the exterior, portrayed in various sizes depicting different stages of ripening, the rich mottled rose enamels accentuated with pale green and lemon-yellow, the blossoms and buds picked out in white, rose and yellow, further decorated with with five iron-red bats, two on the interior and three on the exterior, the base inscribed in underglaze blue with a six-character reign mark within a double circle. A Collection of One Hundred and Fifty Seven Watercolour Illustrations of Japanese and Chinese Porcelain and Pottery, commissioned by Captain F. Brinkley, c. 1900, pl. XX

Note: This immensely elegant and massive charger with its brilliant fencai (famille rose) palette represents the pinnacle of the aesthetic achievement at the imperial kilns during the Yongzheng reign (1723-35). Although fruiting peach branches can be found on a fine and small group of large dishes from the period, they are all individually rendered, and the execution and layout of the design varies considerably from piece to piece. The present charger is exceptional in the depiction of its fruits, whose different stages of ripening are rarely represented in such variety on a single dish. From still partly unripe ones, mostly in garden-fresh green, to fully mature pieces with deep pink spots that seem ready to eat, the skin of the eight peaches was masterfully varied in a range of gradations of shaded pink, yellow and pale green enamels, setting this dish apart from others.

With the pastel shades of rose-pink, lemon-yellow and pale green, the soft colouration of fruiting and flowering peach branches was particularly well suited to show off the new fencai palette, which had just been introduced to Jingdezhen by the end of the Kangxi reign (1662-1722). During the Yongzheng period, the techniques of using this new repertoire of colours were perfected in the imperial kilns, so that painters could begin to depict nature scenes in naturalistic colours. This dish is one of the famous examples, where the Yongzheng painters created a continuous painting of branches starting on the outside, at the foot of the dish, and continuing over the rim onto the inside, in China called guozhi, (‘overshooting branches’). The distribution of the complete painting with eight fruits and five bats over the circular space inside and the horizontal space outside, required very special planning of the complicated layout. The design is further remarkable for the complex interlacing of two different peach varieties, one with single pink blossoms and brown bark, the other with double white blossoms and a nearly black bark. According to Taoya / The Elegance of Porcelain written by the late Qing (1644-1911) author Ji Yuansou, Yongzheng dishes and bowls decorated with eight peaches on overshooting branches were highly prized even well into the Qing dynasty.

Peaches, as an auspicious symbol, have a long history of being associated with longevity and immortality. The eight peaches on this dish would have stood for the Eight Immortals who bestow long life. The red colour of the bats, on the other hand, provide a visual pun for vast good fortune, limitless as the sky (hong fu qi tian), and their number of five offers a rebus for the Five Blessings (wu fu) of longevity, health, wealth, love of virtue and a good end to life. Together the five bats and eight peaches symbolise blessings and longevity, visualising the Chinese saying fu shou shuang quan. Rich in its auspicious symbolism, similar designs continued to be appreciated and produced in later reigns, including Qianlong (1736-95) and Guangxu (1875-1908), albeit no longer of such exceptional painterly quality and on vessels of such monumental size.

Three chargers are decorated in a related fashion to the present piece, all with two bats on the interior: one painted with leafy branches like this charger, from the Sir Percival David Collection and now in the British Museum, London (accession no. PDF,A.840), illustrated in Rosemary E. Scott, For the Imperial Court - Qing Porcelain from the Percival David Foundation of Chinese Art, New York, 1997, pl. 48; another with peaches arranged in similar positions as the present lot, but of slightly larger size, measuring 57.6cm in diameter, illustrated in Sekai tōji zenshū/ Catalogue of World's Ceramics, vol. 12: China: Ch'ing Dynasty and Annamese and Thai Ceramics, Tokyo, 1956, pl. 72; and the third one also with much foliage and similarly placed peaches, sold in these rooms, 2nd May 1995, lot 153 and again at Christie’s Hong Kong, 26th April 1999, lot 541. Porcelain saucer-shaped dish, Six-character Yongzheng mark in a double circle in underglaze blue and of the period (1723-1735), Diameter: 57 cm. On loan from Sir Percival David Foundation, PDF A840 © The Trustees of the British Museum

See a few other similar large dishes, but with relatively less leafy branches and different composition of the peaches, as well as three bats on the inside and two on the outside: one preserved in the Victoria and Albert Museum, London (accession no. 719-1907), included in Reino Liefkes and Hilary Young eds., Masterpieces of World Ceramics in the Victoria and Albert Museum, London, 2008, p. 93; another one, formerly in the collections of Allen J. Mercher and Winston Guest, sold at Parke-Bernet Galleries, New York, 9th October 1957, lot 114 and again in our New York rooms, 2nd December 1967, lot 11, illustrated in Mayuyama, Seventy Years, vol. 1, Tokyo, 1976, p. 353, no. 1059; a further piece, formerly in the collections of J. Pierpont Morgan and Frederick J. and Antoinette H. van Slyke, exhibited on loan at the Metropolitan Museum of Art, New York around 1910, listed in the Catalogue of the Morgan Collection of Chinese Porcelains, vol. 2, New York, 1911, p. 73, no. 1272, with a line drawing on p. 134, Case W, sold twice in our New York rooms, 2nd February 1944, lot 192 and 31st May 1989, lot 209, and again in these rooms, 29th April 1997, lot 400. Although eight is the usual number of peaches depicted on Yongzheng chargers of this type, two pieces rendered with nine peaches have been published: one preserved in the Palace Museum, Beijing (accession no. gu-150245), illustrated in The Complete Collection of Treasures of the Palace Museum. Porcelains with Cloisonné Enamel Decoration and Famille Rose Decoration, Hong Kong, 1999, pl. 56; and another one, with three bats on the interior, sold at Christie’s Hong Kong, 29th April 2001, lot 546 and again in these rooms, 23rd October 2005, lot 434. 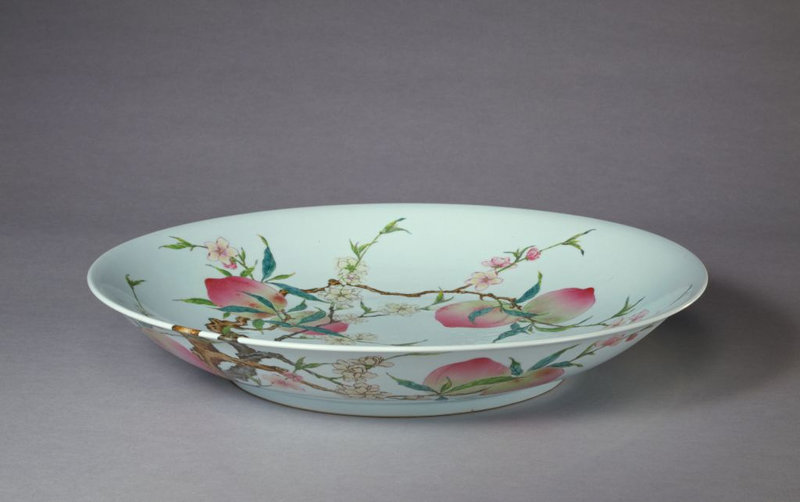 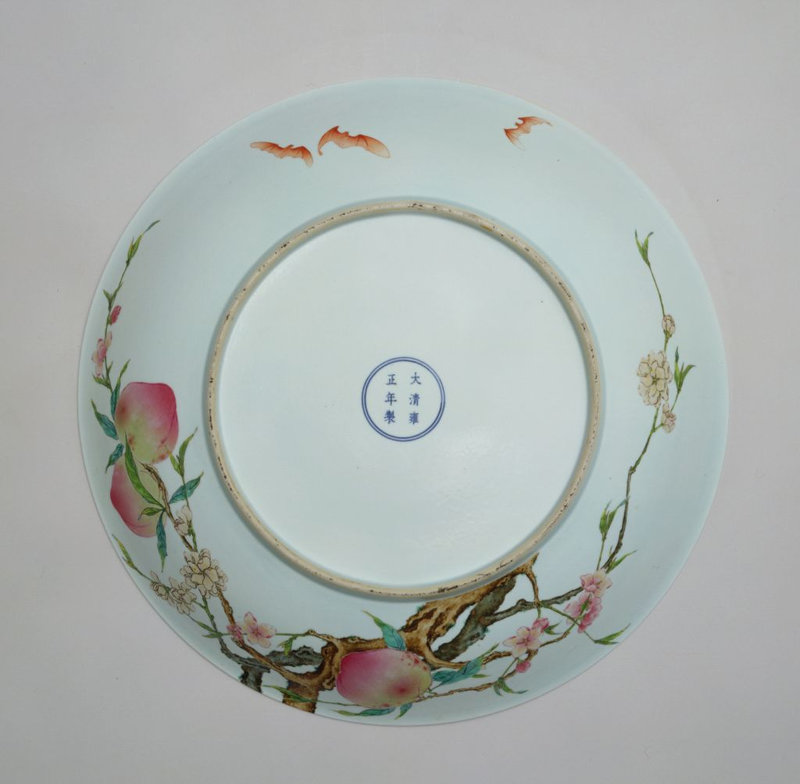 Baron Iwasaki Koyata (1879-1945), the fourth president of Mitsubishi, was the son of Iwasaki Yanosuke (1851-1908) who founded the Seikado Bunko. A notable collector himself, Koyata expanded the Seikado collection particularly in Chinese pottery and porcelains.

Barbara Hutton (1912-1979), heiress, collector and philanthropist, developed a taste in Oriental art and travelled to China in 1934. An exhibition of Chinese porcelains from her collection was held at the Honolulu Academy of Arts in 1956-7.