A fine and rare pair of coral-ground reserve-decorated ‘bamboo’ bowls, Seal marks and period of Qianlong (1736-1795)

A fine and rare pair of coral-ground reserve-decorated ‘bamboo’ bowls, Seal marks and period of Qianlong (1736-1795) 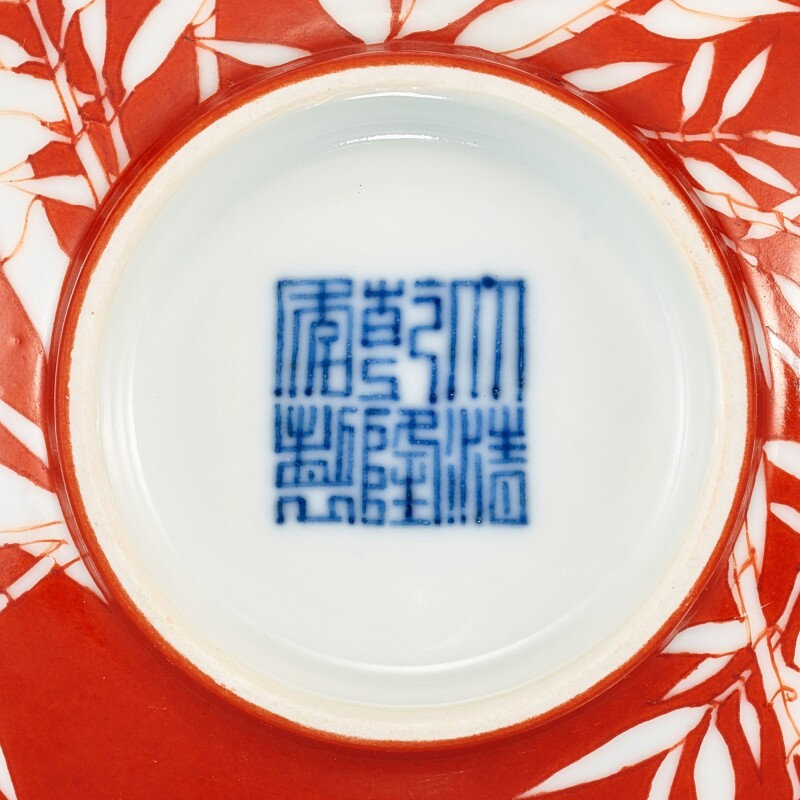 Note: This impressive pair of bowls is notable for the beautifully executed design of bamboo in reserve, which creates a sharp and pleasing contrast between the iron-red enamel and the white porcelain. While iron red was already used to decorate Cizhou wares in the Jin dynasty (1115-1234), and was adopted at Jingdezhen during the Yuan dynasty (1271-1368), it was only in the 18th century, when Tang Ying (1682-1756) supervised the imperial kilns during the Yongzheng (1723-35) and early Qianlong (1736-95) periods, that its decorative potential was fully realised. Iron red, which adheres in a thin, opaque layer, allows for razor-sharp lines, as seen on the pointy leaves of the present lot, which could not be achieved with other enamels that are thicker and glassier. This property makes ‘negative’ reverse designs most successful, giving it a delicacy rarely seen with ‘positive’ painting on a white ground. Against a backdrop in red, which in China is the colour of joyful celebrations, bamboo serves both as a pun for congratulation (zhu) and as a symbol for peace, as the Chinese saying goes zhubao pingan (‘bamboo reporting peace’).

See a few closely related examples; one now in the Hong Kong Museum of Art, included in the Museum’s exhibition The Wonders of the Potter's Palette: Qing Ceramics from the Collection of the Hong Kong Museum of Art, Hong Kong, 1984, cat. no. 77, previously sold in these rooms, 19th May 1982, lot 321; another pair preserved in the Victoria and Albert Museum, London (accession nos 74-1883 and 74A-1883), the latter illustrated in Rose Kerr, Chinese Ceramics: Porcelains of the Qing Dynasty 1644-1911, London, 1986, pl. 18; and a further one from the Paul and Helen Bernat Collection, sold in these rooms, 15th November 1988, lot 30.