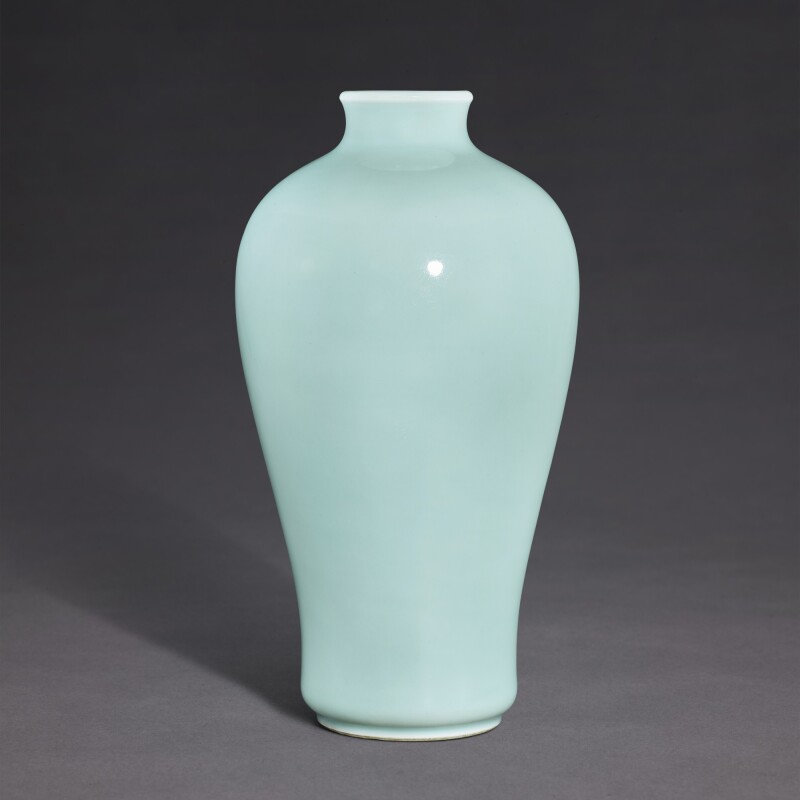 Provenance: Collection of Sven Olof Sandberg, acquired in London in the 1960s, and thence by descent.

Note: This sophisticated jar is remarkable for its luminous celadon glaze and graceful form of meiping. The range of monochrome glazes was greatly expanded during the Yongzheng reign (1723-35) as a result of the technical and artistic advancements made at the imperial kilns in Jingdezhen. New glaze recipes were developed, and those that had been created in earlier periods were perfected, as seen on the celadon glaze of this piece which echoes Song (960-1279) prototypes.

Bottle vases similarly glazed and sized, but retaining a cover, are preserved in both Palace Museums; a piece in Beijing is illustrated in Gugong Bowuyuan cang. Qingdai yuyao ciqi / The Collection of the Palace Museum. Porcelains from the Official Kilns in the Qing Dynasty, vol. 1, part II, Beijing, 2005, pl. 102; for one in the National Palace Museum, Taipei, see (accession no. Zhong-ci-2865). A similar vase exhibited at the Metropolitan Museum of Art, New York, around 1940, was sold at Christie’s New York, 24th June 1983, lot 927; and a slightly taller (29 cm) vase with guan-type glaze, with swelling shoulders and a light crackle throughout its body, was sold in these rooms, 29th April 1997, lot 579. Vessels of this type are also known covered in other high-fired monochrome glazes; see two meiping preserved in the Palace Museum, Beijing, both with wider shoulders: one in copper-red (accession no. xin-111728) and the other one in cobalt-blue (accession no. gu-149133). Compare also related meiping coated with a celadon glaze similar to the present piece, but with recessed bases and measuring around 14 cm in height; one preserved in the National Palace Museum, Taipei (accession no. zhong-ci-3945); a pair illustrated in Regina Krahl, Chinese Ceramics from the Meiyintang Collection, vol. 2, London, 1994, pl. 858; and a further one sold in our London rooms, 7th November 2012, lot 274.