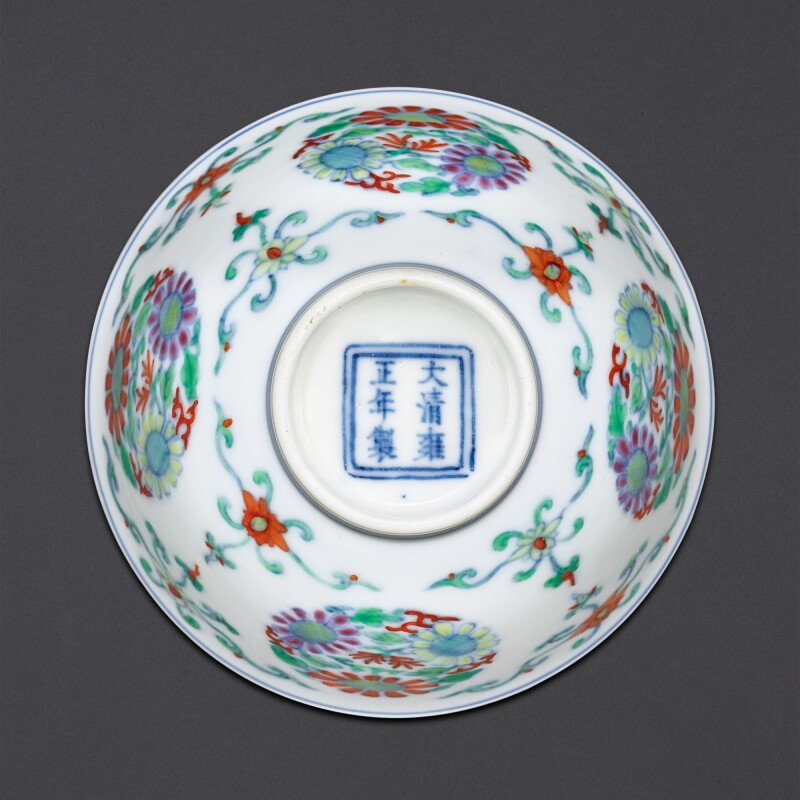 Note: Meticulously painted with roundels of chrysanthemum flowers separated by lotus sprays, this charming cup is a testament of the Yongzheng Emperor’s penchant for classic styles of the past. Its fine and thinly potted body, smooth and tactile glaze, and its delicate motif were inspired by prototypes of the Chenghua reign, which were especially treasured by the Yongzheng Emperor. Compare a Chenghua mark and period reconstructed cup with roundels of chrysanthemums, recovered from the Chenghua stratum at the site of the imperial kiln factory in Jingdezhen, Jiangxi province, and illustrated in Imperial porcelains from the Reign of Chenghua in the Ming Dynasty II, Beijing, 2016, pl. 179.

Yongzheng mark and period cups painted with this motif are held in important museums and private collections worldwide: a closely related cup in the Palace Museum, Beijing is illustrated in Ye Peilan, Beauty of Ceramics: Gems of Doucai, vol. 6, Taipei, 1993, pl. 102, together with one in the Capital Museum, Beijing, pl. 96; a pair is illustrated in Julian Thompson, The Alan Chuang Collection of Chinese Porcelain, Hong Kong, 2009, cat. no. 51; and a cup in the Ise collection, was included in the exhibition The Enchanting Chinese Ceramics from the Ise Collection, The Museum of Oriental Ceramics, Osaka, 2017, cat. no. 75. Further examples were sold at auction, such as a pair from the Edward T. Chow collection, sold twice in these rooms, 25th November 1980, lot 132, and again 20th May 1986, lot 108, and a single example from the collection of Henry and Beatrice Goldschmidt, also sold twice in these rooms, 13th November 1990, lot 33 and again 8th October 2019, lot 3014.