Provenance: Collection of Professor J. Norman Collie, FRS (1859-1942), one of the founding members of the Oriental Ceramic Society, and thence by descent.

Note: Elegantly proportioned and covered in a brilliantly intense blue glaze, the present vessel is remarkable for its extravagant, sophisticated silhouette and beautiful glaze. As with many Yongzheng period (1723-35) monochrome wares, this piece displays the prevailing interest in archaism, as evidenced in its shape. With a flaring rim and globular body, the form refers back to archaic bronze zun. However, a fresh aesthetic suited to contemporary tastes has been achieved through the minimalist blue glaze, which also serves to highlight the elegance of the updated form while still referring to the past. Zhadou were used at banquets as containers for food and drink residues. Over the centuries, the rim has evolved to be wider and the body more compact, as seen on the present piece.

See two blue-glazed zhadou with a globular body and a more widely flared trumpet neck, both of larger size measuring around 22.8 cm in diameter; one from the Qing Court collection and now in the Palace Museum, Beijing (accession no. 149136), illustrated in The Complete Collection of Treasures of the Palace Museum: Monochrome Porcelain, Hong Kong, 1999, pl. 74; the other preserved in the National Palace Museum, Taipei (accession no. zhong-ci-1859). 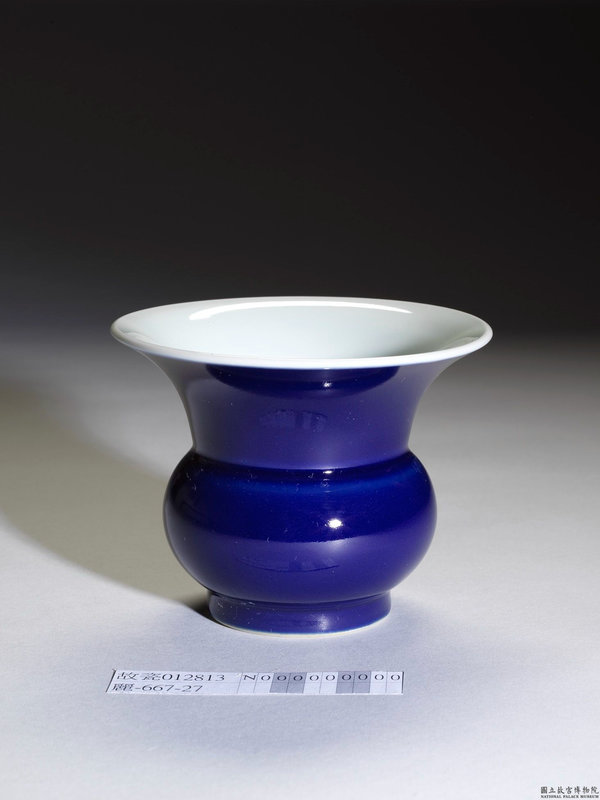