NEW YORK, NY.- Phillips announced that the full lineup for the New York Evening Sale of 20th Century & Contemporary Art is now available online. Poised to be the most successful sale in the company’s 226-year history, the auction will be led by titans of Modern and Post-War Art, including Jean-Michel Basquiat, Pablo Picasso, Mark Rothko, Yves Klein, and Helen Frankenthaler. Featuring a strong Contemporary selection as well, the Evening sale provides a rare opportunity to acquire works by some of the more in-demand artists of today, including Matthew Wong, Amy Sherald, María Berrío, and Anna Weyant. Comprised of 37 lots, the Evening Sale will take place on 18 May at 7pm ET at 432 Park Avenue, following the exhibition, which opens on 30 April.

Jean-Paul Engelen, President, Americas and Worldwide Co-Head of 20th Century & Contemporary Art, said, “This season, we are proud to present the most ambitious offering of works in Phillips’ history, a testament to the expertise of our international team and the strong, trusted relationships they have within the collecting community. From Mr. Maezawa’s Basquiat, to the Kusama that was originally in the collection of Günther Uecker, to the Klein that was owned by Charles Wilp, to the Frankenthaler that hails directly from the Mayerson Family Collection, the strong provenance of the works in our Evening Sale cannot be overstated and we are honored to have been entrusted with their sale.”

Robert Manley, Deputy Chairman and Worldwide Co-Head of 20th Century & Contemporary Art, said, “In recent seasons, we’ve seen an expansion of taste in the market. The interest in high-quality, rare-to-market works that extend back into the 20th century is as strong as that for works by artists who are still creating today. Our May Evening Sale celebrates this breadth of demand, bringing together the very best of Modern, Post-War, and Contemporary Art. Helen Frankenthaler’s Blue Dance and Pablo Picasso’s Figures et plante are offered alongside Carmen Herrera’s Basque and auction newcomer Justin Caguiat’s Doll 3 Eros, presenting collectors an unparalleled selection of works across all interests. We look forward to welcoming collectors into our exhibition and saleroom at 432 Park Avenue.”

Leading the auction is Jean-Michel Basquiat’s Untitled, 1982 from the collection of renowned entrepreneur and art collector Yusaku Maezawa. At over sixteen-feet wide and estimated in the region of $70 million, this monumental work was completed in a pivotal year for the artist and has become one of his most celebrated works. Its sale marks one of the highest estimated works for which cryptocurrency will be accepted as payment.

Andy Warhol’s The Star (Greta Garbo as Mata Hari) marks the artist’s celebrated return to one of his most enduring preoccupations: celebrity and commodification. Conceived as part of his Myths series in 1981, The Star is an iconic tribute to one of the major silver screen goddesses in the artist’s Pop pantheon. Warhol immortalizes Greta Garbo at the peak of her celebrity in the guise of the eponymous character from the 1931 film Mata Hari, which was a sensation in America and Europe. Rarely seen in public, the present work has resided in the same private collection for over three decades. Another stellar example by Warhol to be offered in the Evening Sale is his Flowers, which was executed among the artist’s first Flowers series in 1964 during a seminal chapter in Warhol’s career. The present work signaled a shift from his depictions of timely, instantly-recognizable branding to a more abstracted and timeless imagery, while still seizing source material mediated by popular culture and print magazines. One of the 24 original 48-inch canvases produced, the present work was executed by Warhol before he had even officially determined that the Flowers would be the subject of his inaugural Castelli exhibition that autumn. Embracing a distinctive hyper-flatness that presaged Warhol’s later explorations in wallpaper, this body of work represented the culmination of his iconic Pop aesthetic before announcing his short-lived “retirement” from painting to focus on film. Executed in 1997, the year of the artist’s death, Lichtenstein’s Nude is a superb example from his last major body of work, which sustained his career-long preoccupation with cultural clichés. Once again seizing the cartoon imagery that featured in his earlier work, he deviated from his original source material by visualizing them without their clothes and without the comic book romance. Their metamorphosis into another stock image of femininity perpetuated by printed media reflects Lichtenstein’s ever-evolving dialogue with pop culture and the art historical canon. The first body of work executed after his monumental retrospective in 1993 at the Solomon R. Guggenheim Museum, New York, the Nudes were Lichtenstein’s last contributions to art history and many are now held in important institutional collections, including the San Francisco Museum of Modern Art and The Broad, Los Angeles. Belonging to an exclusive series of six Untitled paintings completed in the autumn of 2006, the work presented in Phillips’ Evening sale is among Cy Twombly’s final great paintings that coalesced his various explorations throughout the trajectory of his career with unprecedented prowess: his signature lasso loops on a monochrome background, his fascination with myth and history, and his concerns with ideas of writing and language that served as key conceptual foundations of his oeuvre. Returning to the looping motif established in his pivotal Blackboard paintings of the late 1960s, the works from Twombly’s Untitled series employ a vertical format and similar grandiose scale measuring roughly 7 by 5 feet. Featuring two to four rows of coiled pseudo-script, these works marked an ambitious development from the Blackboards in Twombly’s expansion of scale, the wider looping forms, and flowing red lines of acrylic that advanced from the artist’s earlier use of white-wax crayon. 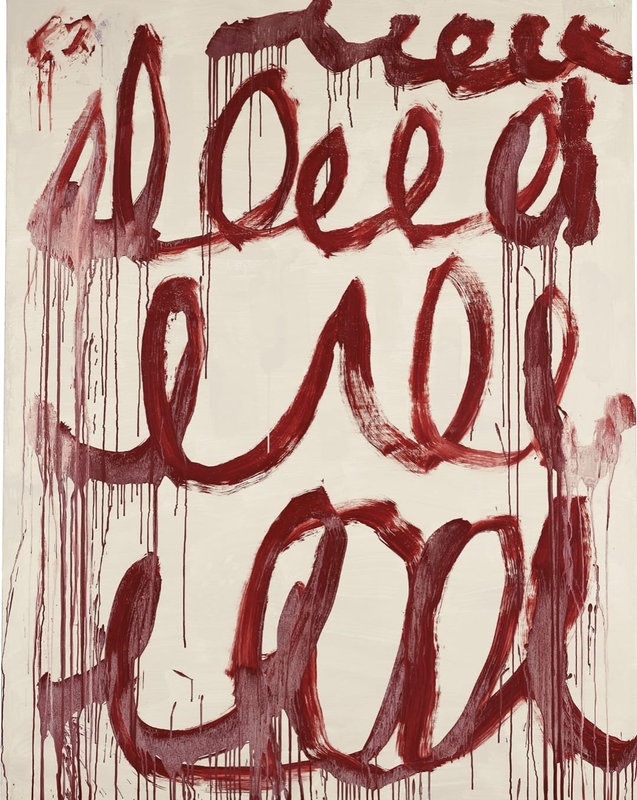 Maintaining the signature palette of Mark Rothko’s first mature paintings, Untitled, 1959, sustains the lineage of the artist’s most celebrated works. Showcasing the chromatic and structural ethereality Rothko achieved in the 1950s, the present work manifests the tighter shape of his feather-edged rectangles by the end of the decade. It is among a discrete group of compositions that defied the artist’s shift to a dramatically darkened palette marked by the Seagram mural commission. The more subdued palette would dominate his painterly oeuvre from the late 1950s through the rest of career. Untitled arrives at auction at a critical moment in the artist’s scholarship, with a major retrospective of Rothko’s paintings on paper slated for November 2023 to September 2024 at the National Gallery of Art, Washington, D.C. and National Museum of Art, Architecture, and Design, Oslo. The following work is being considered for inclusion in the forthcoming Mark Rothko Online Resource and Catalogue Raisonné of works on paper, compiled by the National Gallery of Art, Washington, D.C.

Painted on 4 April 1932, Pablo Picasso’s Figures et plante is a vibrant gem of the artist’s portraits of his reigning muse, Marie-Thérèse. Among Picasso’s finest painterly achievements, the works of this seminal year mark Picasso’s “year of wonders,” as described by the artist’s biographer John Richardson, when Marie-Thérèse had claimed her exceptional presence in his art. Having resided in private hands for the last 20 years, Figures et plante reveals an expanded scene of Buste de femme de profil (Femme écrivant) which the artist had painted just three days earlier. The work also displays striking similarities to his renowned Jeune fille devant au miroir (Marie-Thérèse), which resides in The Museum of Modern Art, New York, and was created less than a month before. Picasso may have been aiming to fuse his investigations in Jeune fille devant au miroir, and Buste de femme de profil in the present work. After nearly three decades in a private collection, Alexander Calder’s monumental 39=50 will be offered in the Evening Sale at $10.5-14.5 million. One of the highest estimates ever assigned to a hanging mobile by Calder, it resided in the collection of French entrepreneur François Pinault for more than a decade and was included in the landmark retrospective of Calder’s work in 1964 at the Guggenheim. Painted in 2018, Day 1 is a striking example of Matthew Wong’s highly coveted landscapes rendered in monumental scale. Indeed, the present work bears resemblance to the artist’s current world record, River at Dusk, also from 2018, not only in scale but also with its unique perspective, high horizon line and rich amber palette. Marking the first of eight paintings from his Day By Night series, the present work featured at MASSIMODECARLO, Hong Kong the following year in the artist’s first solo exhibition in China. María Berrío’s Burrow of the Yellow, 2013, comes to auction as the largest canvas work from artist. Fusing mythology and biography, this work is a paragon of Berrío’s fantastical large-scale collages that teem with chromatic exuberance. Based in New York, the Columbia-born artist is known for her ornate depictions of mythical utopias presenting women at one with nature, finding inspiration in South American folklore and her personal life. Based on a dream Berrío had as an expectant mother, Burrow of the Yellow is a highly autobiographical work that manifests how being a mother has influenced her work. The floral abundance subsuming the women signals to the theme of fecundity from Berrío’s dream while recalling the artist’s oft-cited connection with Gustav Klimt. The present work features tigers which look to the mythic tales and traditions of the Kogi tribe in Colombia—“people of the Tiger”— which further appear in her monumental 2017 canvas Aluna, Ford Foundation, New York, as well as her major 2019 mosaic project for the Fort Hamilton Parkway station in Brooklyn, There is Magic Underneath it All.