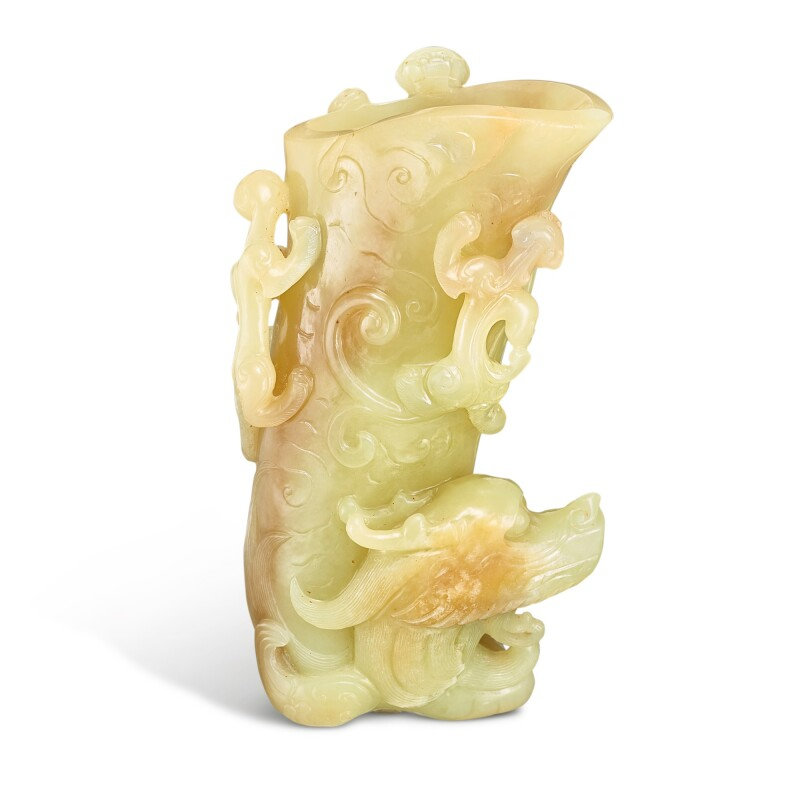 Exhibited: A Romance with Jade: From the De An Tang Collection, Yongshougong, Palace Museum, Beijing, 2004, cat. no. 123.

Note: The present cup is impressive for the use of the highly esteemed yellow jade material and the elegantly carved form which references the past. Yellow jade was much favoured by the Qing court for its association with the imperial colour yellow. Since the Ming dynasty, it was recognised by scholars and connoisseurs as one of the most valued variations of nephrite. In his Yan xian qing shang jian / Refined Enjoyment of Elegant Leisure compiled in 1591, the dramatist-collector Gao Lian noted, ‘Of all jade materials, yellow stones with a mellow tone are the best and mutton-white ones come second’. Because of the rarity of the stone, brownish colourings were often worked into a piece, as seen on the present lot, to increase the overall size and show the carver’s great respect for the treasured material. Compare a related yellow jade rhyton, but larger in size, preserved in the Palace Museum, Beijing, illustrated in The Complete Collection of Treasures of the Palace Museum. Jadeware (III), Hong Kong, 1995, pl. 137.

Jade cups in the form of horns appeared in antiquity and continued to be appreciated until the Qing dynasty. See a Western Han prototype, excavated from the tomb of the Nanyue King Zhao Mo (r. 137-122 BC) located in Guangzhou, a celadon jade rhyton carved with a kui dragon below its mouth and spiral patterns in the background, the base with a bifurcated and striated tail, but lacking the dragon head of the present piece, included in the exhibition Jades from the Tomb of the King of Nanyue, Museum of the Western Han Tomb of Nanyue King, Guangzhou, and The Chinese University of Hong Kong Art Gallery, Hong Kong, 1991, cat. no. D44, pls 102-105. From around the Song dynasty, rhytons were carved with a mythical animal head at the base, perhaps as a later intervention to provide a visual explanation for the source of the bifurcated tail; see a Song dynasty example, formerly in the Cunliffe Collection, included in the Oriental Ceramic Society’s exhibition The Arts of the Sung Dynasty, London, 1960, cat. no. 252, and sold in these rooms, 9th October 2012, lot 3137. For related Qianlong examples, see a yellow jade rhyton carved with an inverted dragon head, formerly in the Gerald Godfrey Collection and the De An Tang Collection, sold in these rooms, 13th October 2021, lot 3605; and a pale celadon example sold at Christie’s London, 8th May 1972, lot 167. Compare also a related rhyton from the collection of Dr Ip Yee, illustrated in Chinese Jade Carving, Hong Kong, 1983, cat. no. 214.Boxes of this circular form were used for holding incense and often displayed together with an incense burner and a small vase. Two jade garniture sets of this type, but the boxes carved on the cover with different motifs, in the Palace Museum, Beijing, are illustrated in Compendium of Collections in the Palace Museum. Jade, vol. 10: Qing Dynasty, Beijing, 2011, pls 112 and 113.