New York – Bonhams New York Jewels sale is filled with Hollywood glamour and Art Deco treasures from three important American collections. On May 24, 2022, jewels on the auction block include a 101-carat Colombian emerald Art Deco bracelet by Cartier, circa 1926, from the collection of Hélène Irwin Crocker Fagan (1887–1966), one of the richest American heiresses in the world during the Belle Epoque and Art Deco eras. Daughter of William G. Irwin, an English capitalist who amassed a fortune as a sugar baron in Hawaii, Hélène married Templeton Crocker (grandson of Charles Crocker, one of the big four railroad magnates) in 1911. The newspapers went wild, and the San Francisco Call headline read, "Crocker-Irwin Wedding Bells Clink of Gold: Vast Fortunes to be United at Altar." Hélène also owned a wonderful pearl and diamond aigrette by Cartier, circa 1914, and a collection of elegant cigarette cases and objects. 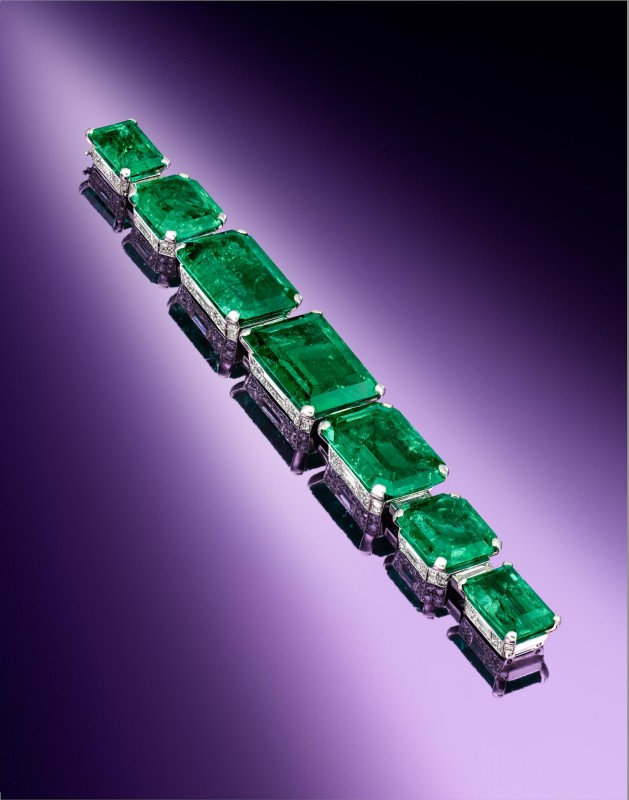 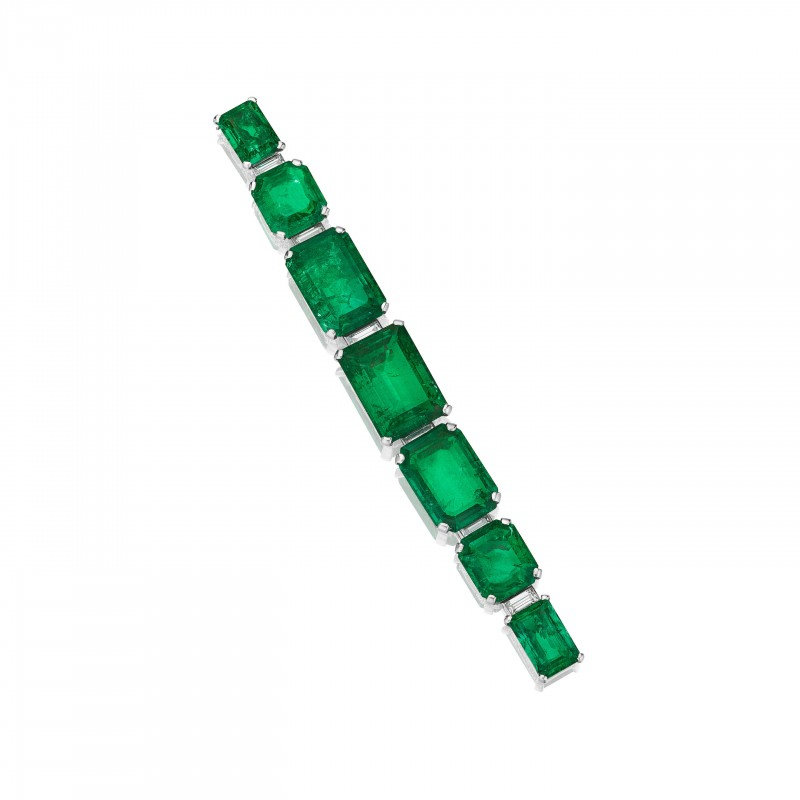 Accompanied by Gubelin report no. 22022047, dated 3 March, 2022, stating that the emeralds, with an estimated total weight of 101 carats, are of Colombian origin, with minor clarity enhancement.

Accompanied by Certificate of Expertise from Olivier Bachet, dated 18 April 2022.

Accompanied by AGL report no. 1123551, dated 18 May 2022, indicating that the emerald is of Colombian origin and has insignificant to minor traditional clarity enhancement. The diamond bandeau centering a finial of overlapping diamond twists, in which two natural pearls rest above and below an old European-cut diamond, weighing approximately 8.25 carats; the interior with loops to hold feathers, as was en vouge for the era; total estimated carat weight: 5.50 carats; mounted in platinum and steel; signed Cartier New York.

Note: This aigrette quintessentially reflects the confluence of the incoming Art Deco movement and Cartier's romance with India in the early 20th century. French for 'egret,' it was created to hold fantastic feathers, often supplied from the far reaches of exotic lands throughout the world, thus amplifying the intrigue of these jewels.

The piece was a departure from the taller tiara styles of the 18th century, bringing in a new era of refined opulence. The popularity of the aigrette rose at the end of the 19th century, and evolved to match the shorter hairstyles and minimalist lines of design brought about by the First World War.

The natural pearls are a historically significant feature, as the advent of the cultured pearl industry was on the horizon, which would forever change the pearl trade. This aigrette is a superb example of a bygone era, in which the inclusion of exquisite jewels was essential to a soignée evening dress.

Accompanied by Certificate of Expertise from Olivier Bachet, dated 18 April 2022.

Lady Sylvia Ashley (1904–1977) was an extraordinary beauty and hundreds of society photos capture her dazzling smile, perfect style, and love of jewelry. Known as "Silky" to her friends, referencing her start as a chorus girl and lingerie model, she was lively, extravagant, and loved a crowd. Numerous newspaper articles covered her five marriages to two lords, one prince, and two Hollywood icons: Douglas Fairbanks Sr. and Clark Gable. Her collection (more than 60 pieces) is full of jewelry and objects with old Hollywood glamour collected during an extraordinary life. From an Art Deco aquamarine bracelet by Cartier, to a geometric diamond charm bracelet by Van Cleef & Arpels, Lady Ashley loved and wore her pieces during her adventures, be it meeting Prince Edward at Buckingham Palace or traveling the world on Douglas Fairbanks' yacht. The selection of Art Deco boxes by Cartier and other makers is noteworthy. Two midcentury gold Van Cleef & Arpels clocks are wonderfully whimsical timepieces and the "Inséparables" clock from the 1940s features two emerald lovebirds and a spray of rubies – a similar model was owned by Jacqueline Kennedy Onassis. One of the most personal pieces in the collection is a gold and enamel geometric Cartier cigarette case engraved "Sylvia from Douglas" on the interior. Another is the gold heart charm that contains a photo of Fairbanks and a lock of brown hair. 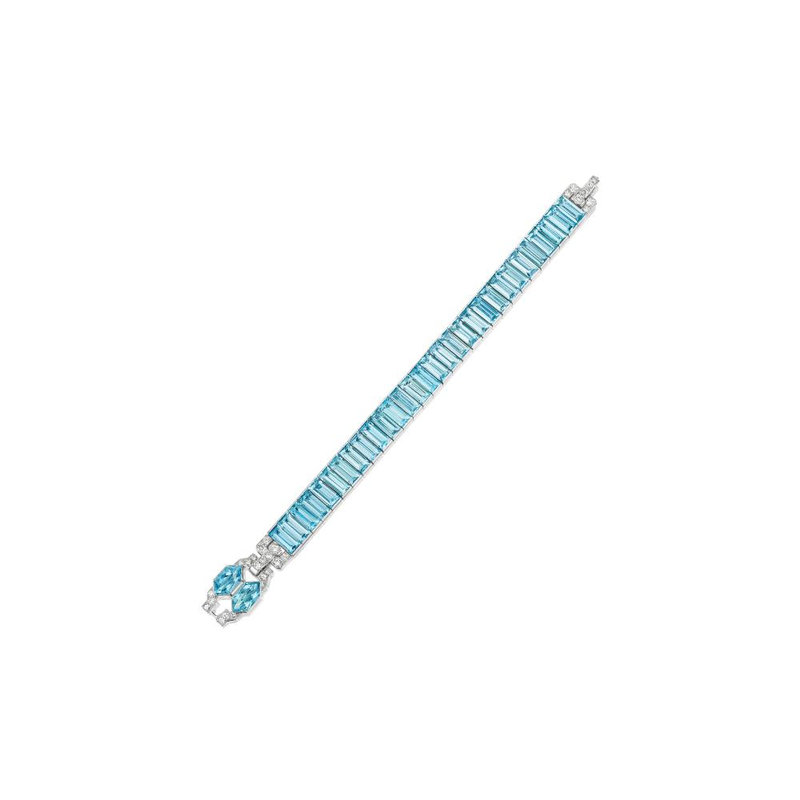 As one of the world's most beloved entertainers, Bette Midler's expansive body of work has spanned nearly six decades across different genres, eras, and media. She has been recognized with four Grammy Awards, two Academy Award nominations, three Emmy Awards, two Tony Awards, three Golden Globe Awards, and nine American Comedy Awards. In December 2021, Midler was inducted as part of the 44th Kennedy Center Honors for lifetime artistic achievements. One of the bestselling female singers, her albums have sold over 30 million copies worldwide. She is celebrated for films including The Rose, Beaches, and Hocus Pocus, and her recent Broadway turn in Hello Dolly!. On and off stage, Bette Midler's style has always demanded attention. From the red carpet to her costume parties for her charity the New York Restoration Project, to her laid-back looks, Midler is an icon of style and is always adorned with eye-catching jewelry. More than a dozen pieces from Midler include a spectacular diamond and yellow sapphire feather from Tiffany & Co., a pair of gold bubble bracelets from Demner, earclips from Buccellati, and a Cartier "La Dona" gold watch. 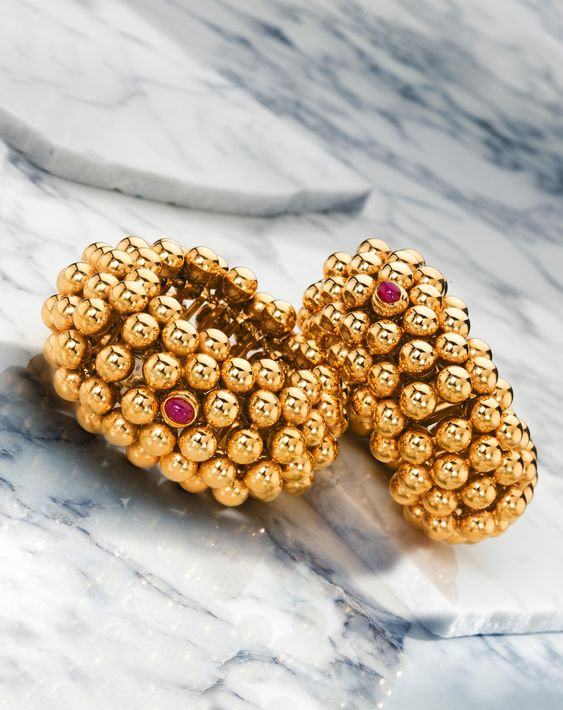 Caroline Morrissey, Director of Jewelry for Bonhams New York, said: "The New York Jewels sale is full of exceptional pieces, both signed and unsigned, including some with incredible provenance. We are delighted to present three fabulous jewelry collections from American ladies: first, the incredible jewels of Hélène Irwin Crocker Fagan, an heiress from the Art Deco era who owned one of the finest Colombian emerald Cartier bracelets I have ever seen; second, the collection of Lady Ashley, a rags to riches story of a chorus girl who ended up marrying both Douglas Fairbanks and Clark Gable; third, jewelry from a living legend, the inimitable Bette Midler. Many of the pieces in this sale are on the market for the first time and it is an incredible opportunity to buy a beautiful jewel with a famed and glamorous story behind it." 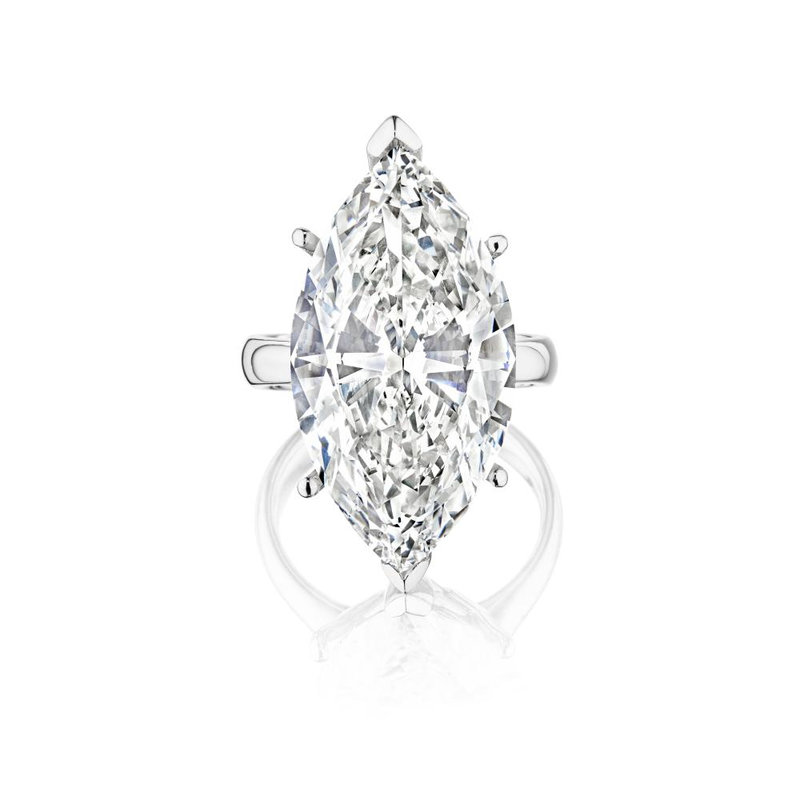 Accompanied by AGL report no. 1107638, dated 15 May 2020, stating that the emerald, weighing 13.39 carats, is of Colombian origin, with minor modern clarity enhancement. 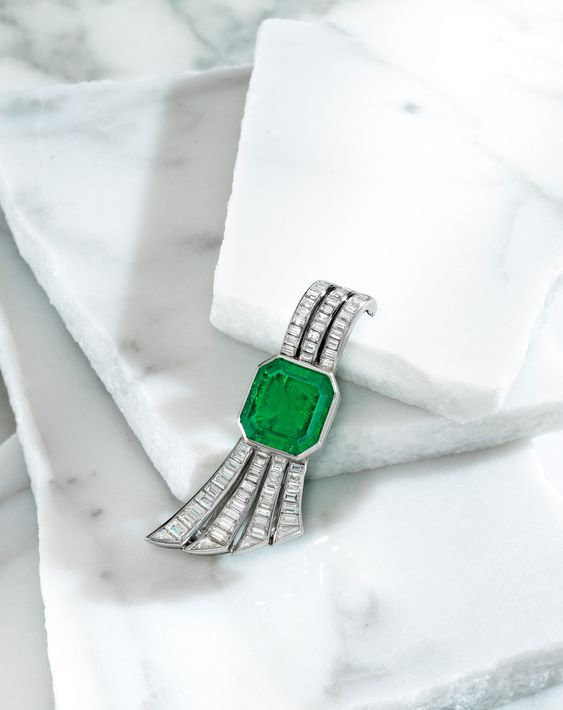 Accompanied by AGL report no. CS 57294-D, dated 8 October 2013, stating that the emerald, weighing 4.96 carats, is of Colombian origin with no clarity enhancement.