PARIS.- Bonhams Paris and Cornette de Saint Cyr, in collaboration with Jean-Luc Estournel et Marie-Catherine Daffos, are proud to announce the auction of the outstanding Rousset Family private collection in Paris this autumn. The sale of The Robert & Jean-Pierre Rousset Collection of Asian Art: A Century of Collecting will take place in Paris at Cornette de Saint Cyr, Avenue Hoche, on Tuesday 25 and Wednesday 26 October. The collection consists of more than 300 lots, with highlights from Asia and the ancient world ranging from China, Japan, South-East Asia, Africa, Oceania, and Europe.

A selection of pieces will be exhibited during the Printemps Asiatique event in Paris from 8 to 16 June 2022 at Cornette de Saint Cyr.

Jean-Luc Estournel and Marie-Catherine Daffos, Cornette de Saint Cyr experts (Asian Arts and Tribal Art), said: “It is rare to encounter a private collection of such high quality. We know that Asian art collectors the world over will relish the opportunity to compete for rarities with such outstanding provenance.”

Asaph Hyman, Bonhams Global Head of Chinese Ceramics and Works of Art, said: “It is a great honour to have been entrusted with the Rousset Family Private Collection. The exceptional quality and rarity of the pieces is testament to the superb eye and knowledge which has characterised the Rousset name for three generations. The sale of the Rousset private family collection is a landmark event.”

For more than a century, the name Rousset has been synonymous with scholarship, excellence and taste in the world of Asian Art. In 1920 Robert Rousset visited the Forbidden City in Beijing which sparked his lifelong passion for Asian art. This led to him acquiring the Compagnie de la Chine et des Indes, a gallery which was subsequently run by three generations of the Rousset family: Robert (1901-1982); Jean-Pierre Rousset (1936-2021), Hervé du Peuty, Jean-Pierre’s nephew and Mike Winter-Rousset, who is bringing his family’s private collection to sale. The gallery closed its doors for the final time in 2021.

Through their scholarship, expertise and pioneering advocacy of Asian and Ancient art, the Rousset dynasty played tastemaker to generations of collectors across the world, especially in France and the US, where Robert established a gallery in New York in 1946.

The Rousset family were, however, not only gallerists; they were avid and sophisticated collectors as witnessed by Robert’s generous donations to Musée Guimet in Paris which included his exceptional collection of Chinese funerary figures that are on permanent display.

Mike Winter-Rousset, who ran Compagnie de la Chine et des Indes with his cousin Hervé du Peuty at 39 avenue Friedland from 1982 until he retired in 2021, added: “The passion for Asian art has run through my family ever since Robert Rousset made his life-changing visit to the Forbidden City more than 100 years ago accompanied by the famous Swedish specialist Osvald Sirén. I grew up surrounded by these wonderful pieces and they represent many happy memories for me but now is the time for other people to enjoy them as much as I and my family have over the decades.”

Arnaud Cornette de Saint Cyr said: “The sale of the Rousset private family collection is a major event in the world of Asian art and we are delighted to be partnering with Bonhams and Jean-Luc Estournel and Marie-Catherine Daffos to present this eagerly anticipated event.”

Catherine Yaiche, Bonhams Managing Director, France, said: “The Rousset name is legendary not only in France but across the world. It is a big vote of confidence to have been awarded such a prestigious sale, in partnership with our friends at Cornette de Saint Cyr.” The present Bodhisattva can be recognised as Avalokiteshvara, known in China as Guanyin, the Bodhisattva of Compassion. The gentle expression, modelled with gently inward-turning gaze, emphasises the Bodhisattva’s powers as a comforter, while the naturalistic modelling of body and dress stress nearness and accessibility.

• An important and extremely rare large stone head of a Bodhisattva, Northern Qi Dynasty (550 – 577 AD). Elegantly proportioned and delicately carved, the present head is a remarkable example of the high standards achieved in Buddhist portraiture during the Northern Qi period, one of the most vibrant periods in the history of Chinese art. Estimate: €200,000-300,000.

• An important and exceptionally rare huanghuali inscribed documentary stone-top table, Late Ming Dynasty (16th century). As the poetic inscription on the table suggests, it would have been suitable for playing the qin, a Chinese zither musical instrument or for reading, aiding in study and serving the court. The seal may relate to the famous painter, calligrapher and poet, Wen Zhengming (1470 - 1559). Estimate: €120,000-150,000.

• An archaic bronze ritual vessel and cover, fang hu, Mid Western Zhou Dynasty (circa 10th-9th century BC). The exceptional ritual vessel was used to store wine for the need of the deceased in the afterlife. It is superbly decorated with a monster mask below stylised birds and elephant-shaped handles. Estimate: €120,000-180,000. 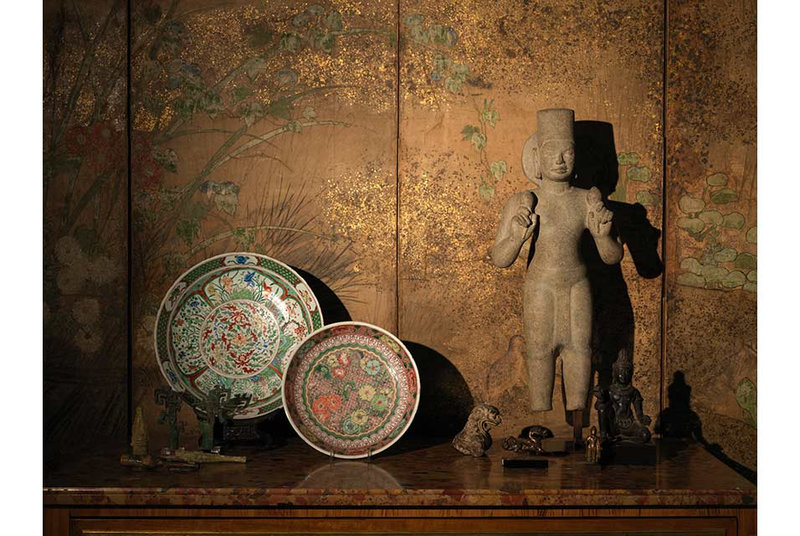