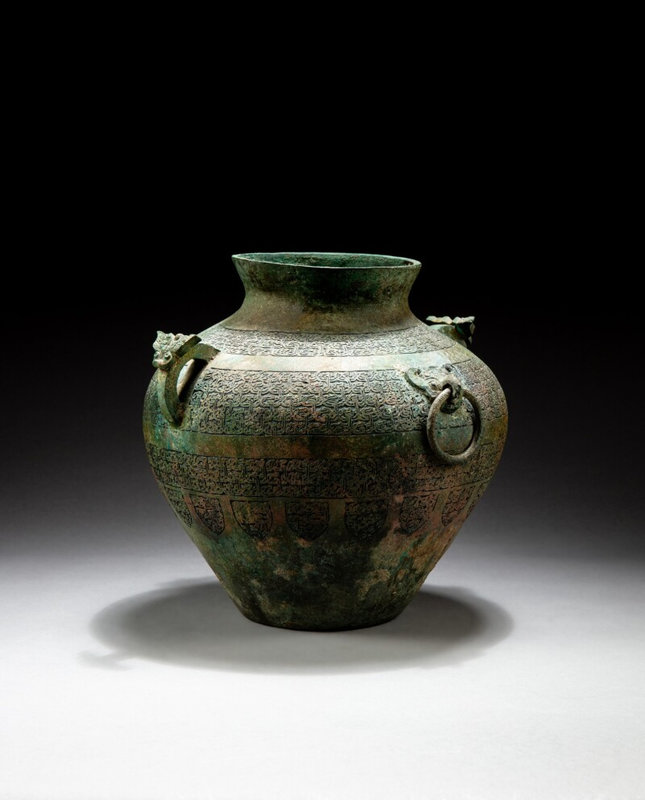 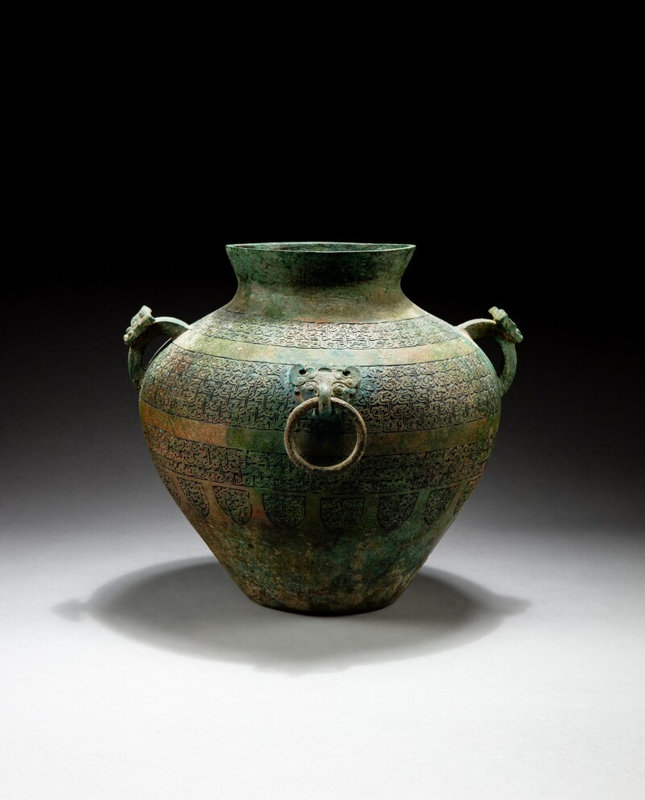 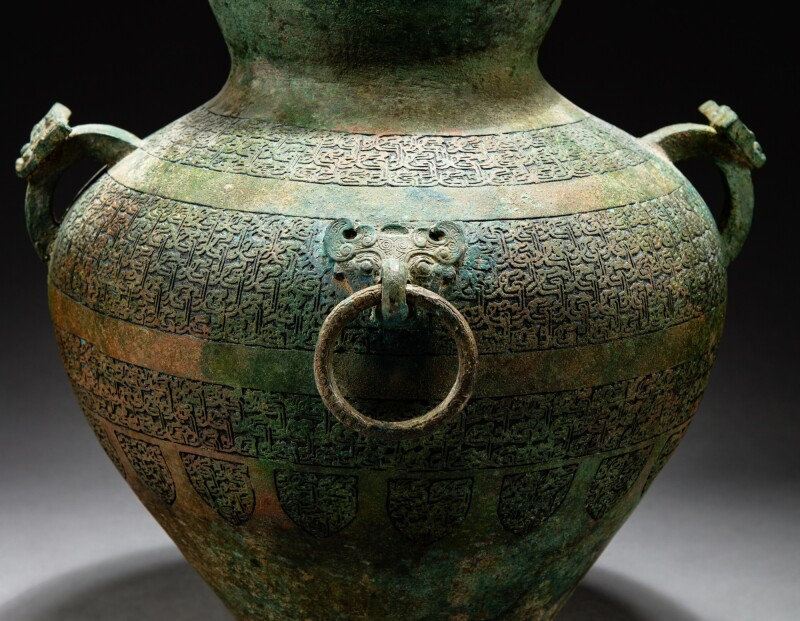 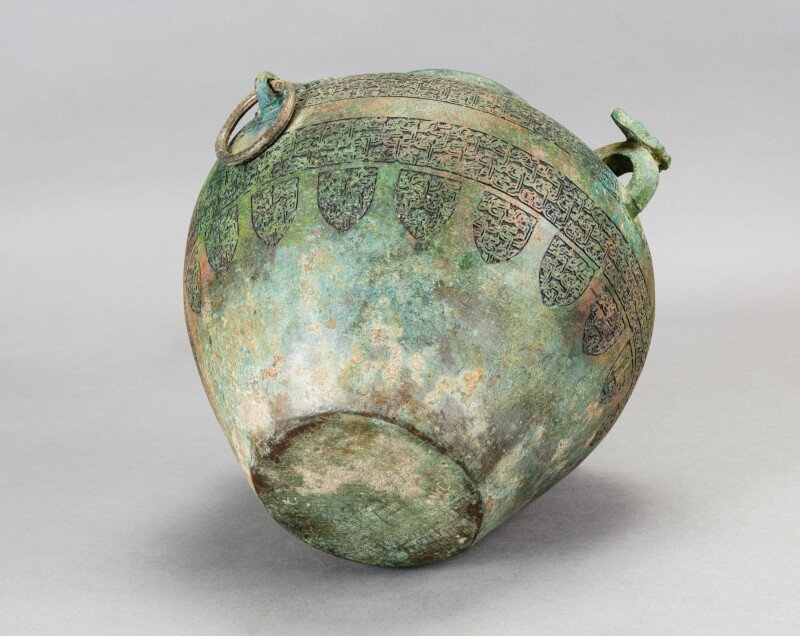 Property from a European private collection.

Note: The intricate pattern sensitively cast on this piece is extraordinary, showcasing the virtuosity of the casters from the Eastern Zhou dynasty (770-256 BC). Compare a lei with similar shape and three narrow bands of related delicate design, but lacking a pair of ring handles, excavated from the tomb of Lady Meng Ji at Baoxiangsi, Guangshan, Henan province in 1983, illustrated in Jenny So, Eastern Zhou Ritual Bronzes from the Arthur M. Sackler Collections, New York, 1995, p. 205, fig. 30.1. 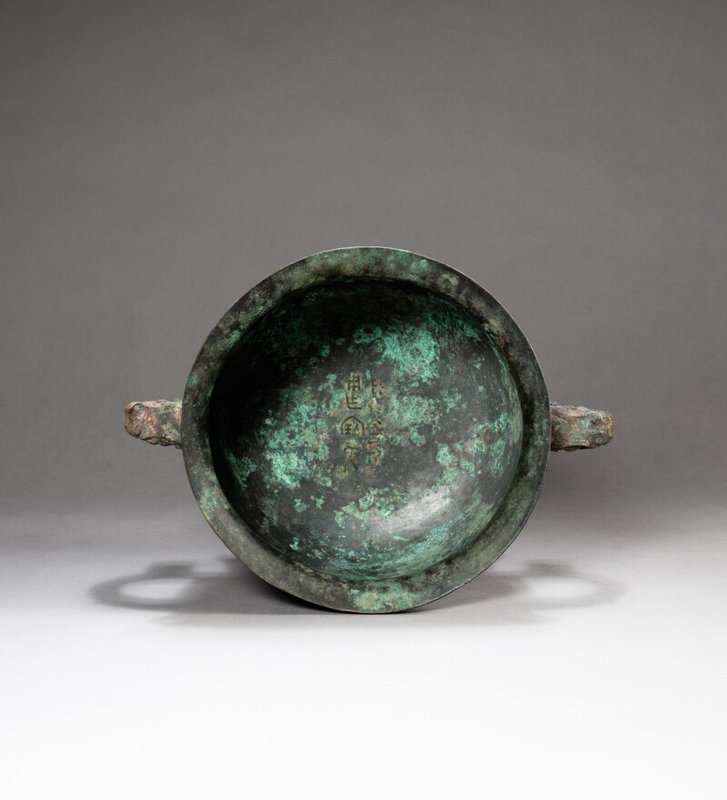 Property from a European private collection.

Note: Vividly decorated with confronted birds with long curly tails raised against a leiwen ground, this gui is characteristic of bronze casting in the Western Zhou period (c.1046-771 BC). The shape of this vessel, with its rounded body, everted rim and animal-head handles, also represents one the most popular forms of the time. A similar vessel but of smaller size was excavated in 1957 from Zhaoyuanpo, Chang’an, Shaanxi province, now in the National Museum of China, Beijing, illustrated in Zhongguo qingtongqi quanji / A Complete Collection of Chinese Ancient Bronzes, vol. 5, Western Zhou 1, Beijing, 1996, pl. 61. Gui were used to hold cooked rice or millet in ritual ceremonies.

This vessel bears a nine-character inscription, Cong ci jin yu gong yong zuo bao yi, which can be translated as ‘Cong made this precious vessel from the bronze material gifted by his master’. A smaller bronze vessel gui cast with the same inscription, albeit raised on a square pedestal and adorned with different ornaments, attributed to the early Western Zhou period, is recorded and illustrated in Selected Bronzes in the Collection of the Poly Art Museum, Beijing, 1999, pp. 63-4.

Very little is known about the owner of this bronze, Cong. Based on the form and design of the present gui, Cong should have been active some time between the early to middle Western Zhou dynasty. A small group of bronze gui of a related form and design have been discussed by Wang Shimin et al. in their book Xizhou qingtongqi fenqi duandai yanjiu / A Study of the Periodization and Dating of Western Zhou Bronzes, Beijing, 1999. One, the Yu Zheng Wei gui from the National Palace Museum, Taipei, has been attributed by the authors to the period of King Kang (c. 1040 BC-c. 996 BC) (p. 62, no. 18); another gui, in the Palace Museum, Beijing, is attributed to the first phrase of the middle Western Zhou period (p. 62, no. 20); and a third example in the National Museum of China, Beijing, is attributed to the middle Western Zhou period (p. 65, no. 21). Wu Zhenfeng suggests that Cong was active during the first phrase of the early Western Zhou period (see Wu Zhenfeng, Jinwen renming huibian [Compilation of the names from bronze inscriptions], Beijing, 2006, p. 58).

Two other ‘Cong’ vessels are recorded, which may relate to the present gui, both of which are preserved in the Shanghai Museum. The first, a bronze ding bearing a twelve-character inscription, attributed to the early or middle Western Zhou dynasty, is published in The Institute of Archaeology, Chinese Academy of Social Sciences, Yin Zhou jinwen jicheng [Compendium of Yin and Zhou bronze inscriptions], Beijing, 1984, no. 02461; and the second, an early Western Zhou dynasty gui cast with five characters to the interior, is illustrated in Chen Peifen, Xia Shang Zhou qingtongqi yanjiu [Study of archaic bronzes from Shang, Shang and Zhou dynasties], Shanghai, Western Zhou, vol. 1, 2004, pl. 227. 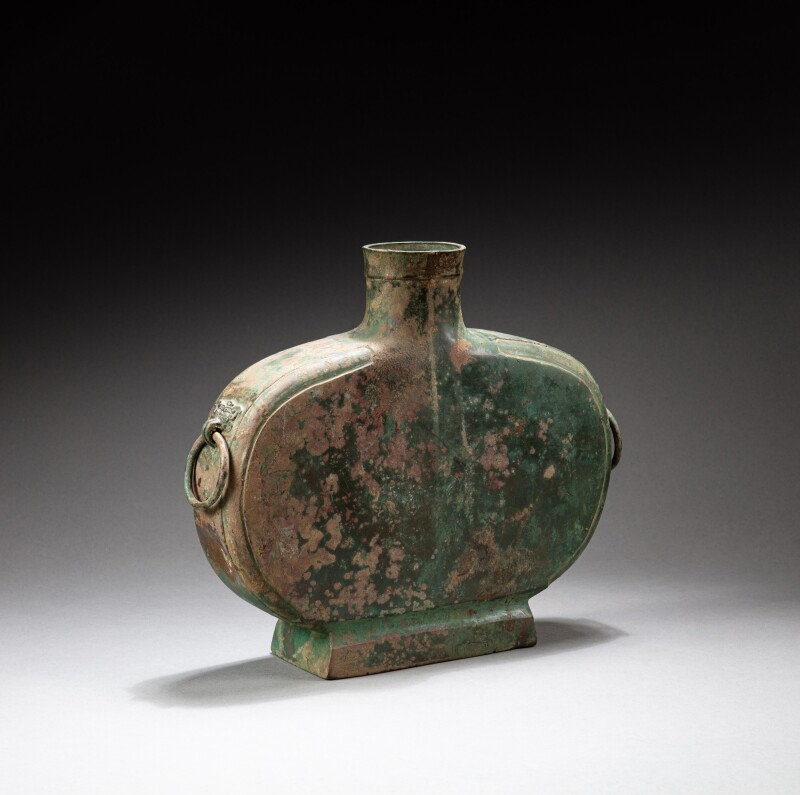 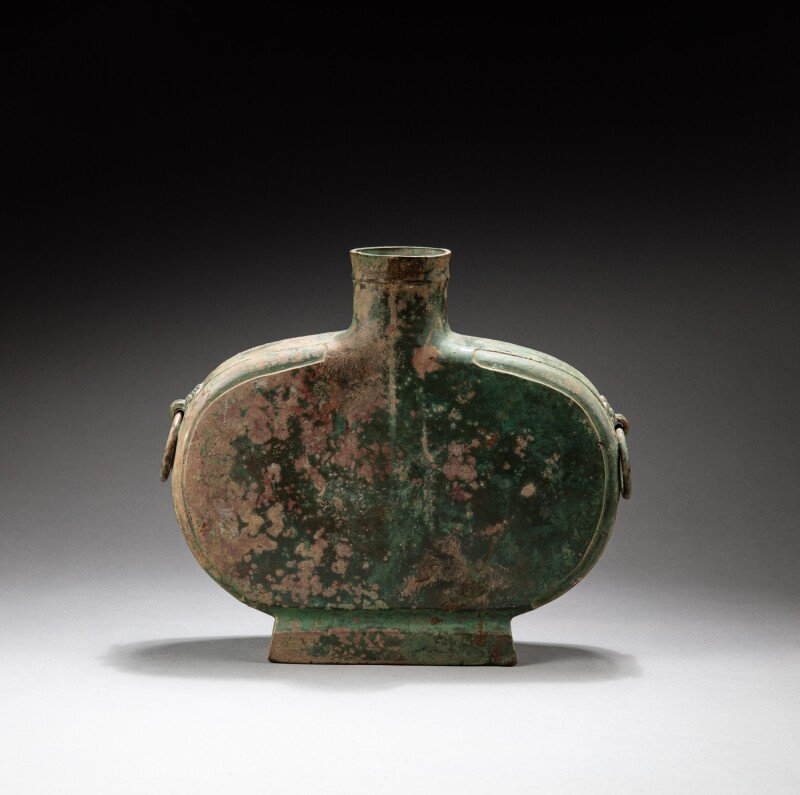 Property from a French private collection. 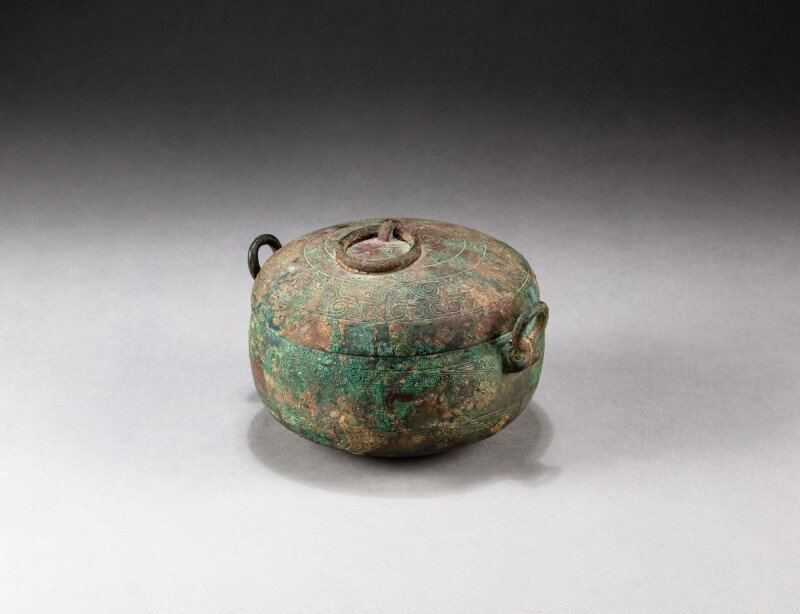 the rounded vessel set with ring handles, decorated with a border of horizontal cicada above striding feline, the fitted domed cover cast with an incised border of alternating whorls and centred with a ring finial surrounded with bracket panels, covered overall with malachite and cupric oxidisation.

Provenance: Acquired in Paris prior to 1968. formed of a deep bowl with an everted rim, raised on three high baluster feet, crisply cast around the exterior with meandering mythical beast, some areas covered with cupric and malachite oxidisation.

Provenance: Acquired in Paris prior to 1968.