'Pre-Raphaelites: Drawings and Watercolours' at the Ashmolean

'Pre-Raphaelites: Drawings and Watercolours' at the Ashmolean OXFORD - The Ashmolean is delighted to announce that it will re-mount its popular exhibition, Pre-Raphaelites: Drawings and Watercolours, which was shown for just five weeks in 2021.  The tragic situation in Ukraine has inevitably forced the Museum to withdraw its planned exhibition, Russia! Icons & the Avant-Garde, which was due to open in July 2022.  However the opportunity to present this world-renowned collection of Pre-Raphaelite works on paper will be welcomed by many visitors who were unable to see them last year when the exhibition was curtailed due to the pandemic.

Few people have examined the large number of Pre-Raphaelite drawings and watercolours held in the Western Art Print Room.  Even enthusiasts and scholars have rarely looked at more than a selection.  This exhibition makes it possible to see a wide range of these fragile works together.  They offer an intimate and rare glimpse into the world of the Pre-Raphaelite Brotherhood and the artists associated with the movement.  The exhibition includes works of extraordinary beauty, from the portraits they made of each other, studies for paintings and commissions, to subjects taken from history, literature and landscape. In 1848 seven young artists, including John Everett Millais, William Holman Hunt and Dante Gabriel Rossetti, resolved to rebel against the academic teaching of the Royal Academy of Arts.  They proposed a new mode of working, forward-looking despite the movement’s name, which would depart from the ‘mannered’ style of artists who came after Raphael.  The Pre-Raphaelite Brotherhood (PRB) set out to paint with originality and authenticity by studying nature, celebrating their friends and heroes and taking inspiration from the art and poetry about which they were passionate.  This innovative approach and their characteristic styles influenced younger generations of British artists well into the 20th century.

Some key events in the history of Pre-Raphaelitism took place in Oxford.  Thomas Combe, the senior partner of the University Press, and his wife, Martha, were important patrons and surrogate parents to the young artists, hosting them at Christmas and buying their early works.  When Martha Combe died she left the couple’s considerable collection of Pre-Raphaelite drawings and paintings to the Ashmolean.  William Morris and Edward Burne-Jones became converts to the movement while they were studying at Exeter College.  It was in an Oxford theatre that another key figure, Jane Burden, met Morris and Rossetti, the two men who became her husband and her lover.  Oxford, too, played an important role in John Ruskin’s life, and he began donating many of his own exquisite drawings to the University in the 1870s. 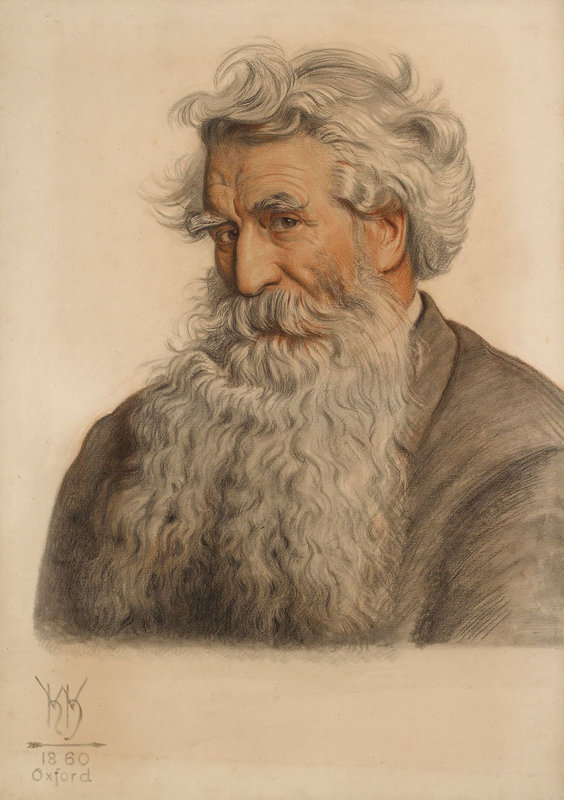 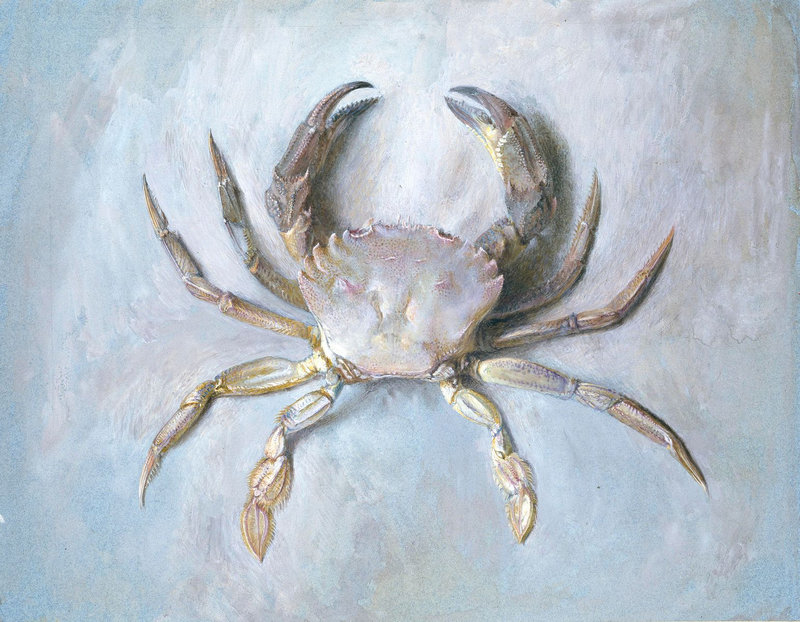 Small, affectionate sketches offer insights into the Pre-Raphaelites’ lives and relationships.  Millais and Charles Allston Collins made pencil drawings of one another in 1850, both looking extremely young and very serious.  Rossetti’s profile watercolour of Elizabeth Siddal (1854) is an early example of the now iconic Pre-Raphaelite woman, revealing an artist captivated by his model.  They went on to marry in 1860.  Siddal’s own take on the group, Two Men in a Boat and a Woman Punting (c. 1853-5), is a witty variation on Rossetti’s Boatmen and Siren.  In her scene the man pleads with the ‘siren’ who uses her pole to push him away with a furious expression on her face. 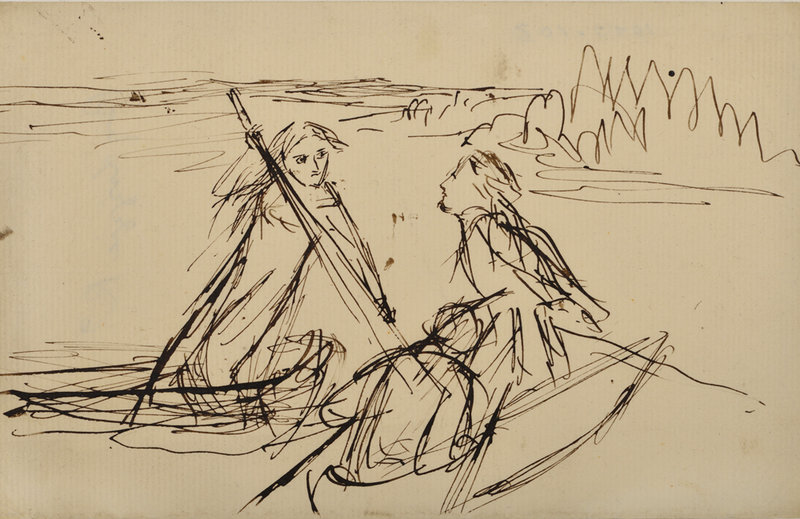 Works on paper show a huge variety of styles, methods and media.  Millais and Holman Hunt had been through the rigorous training of the Royal Academy Schools, with its emphasis on drawing the human figure.  Rossetti and Burne-Jones were relatively untrained and arguably more original as a result.  The exhibition includes Burne-Jones’s dazzling The Knight’s Farewell (1858), a tour de force of detail, made with pen on vellum.  Watercolours by John Brett and Simeon Solomon resemble oil paintings in their intensity of colour and rendition of light.  Ruskin came from a different tradition again, that of the amateur watercolourist.  He was a gifted draughtsman and his nature studies are miracles of acute observation, sometimes compared to works by Albrecht Dürer.  He confessed, however, that he was unable to paint from imagination: ‘I can do nothing that I haven’t before me; I cannot change, or arrange, or modify in the least, and that amounts to a veto on producing a great picture’. The Pre-Raphaelites are possibly best known for their depictions of women.  Rossetti popularised the term ‘stunner’ – which now rings uncomfortably in modern ears.  At the time, it indicated progressive thinking: the Pre-Raphaelite ‘stunner’ was an unconventional beauty combining strikingly strong, even androgynous features, with an ethereal quality implying a rich inner life.  The women celebrated in these pictures were often artists and intellectuals.  Jane Burden was a remarkable woman who despite having little childhood education became hugely accomplished, speaking French and Italian and playing an important role in Morris & Co.  She modelled countless times for Rossetti, posing as literary characters (Reverie, 1868) or just captured reading a newspaper on a sofa.  Both Elizabeth Siddal and Marie Spartali Stillman were gifted artists whose own work features in the exhibition and ought to be better known.  As models these women often wore floating, unstructured dresses, disposing of the corsets and crinolines of Victorian convention.  They cultivated their own images and their portraits show conscious participation in the development of Pre-Raphaelite visual culture. 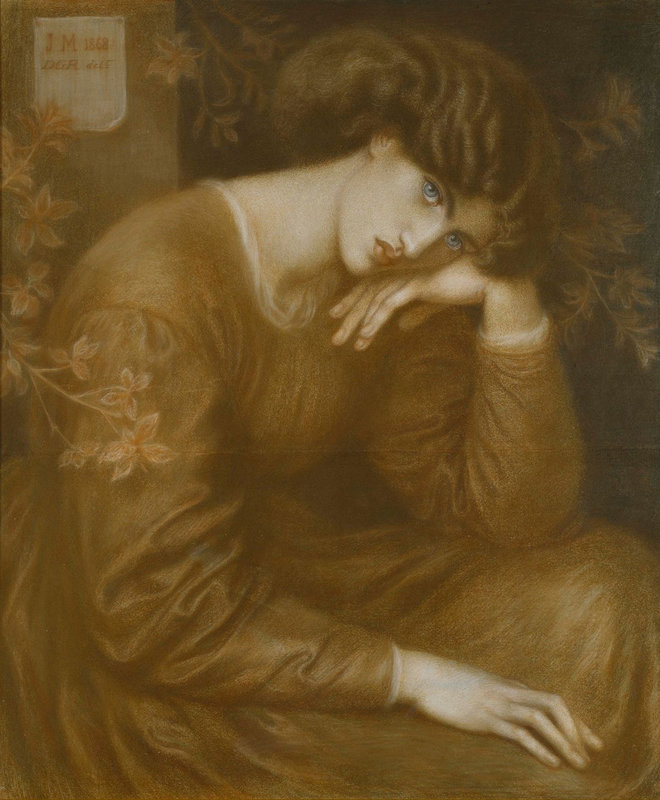 The Pre-Raphaelites were fascinated by the costumes and artefacts of the past and they loved literature, especially poetry.  Several works in the exhibition were designed as book illustrations.  The PRB drew up a list of literary ‘Immortals’, with rankings from one to four stars.  Chaucer had two stars, while Shakespeare had three (the highest rating apart from Jesus Christ, who had four), Browning had two and Tennyson just one.  A favourite of Morris and Burne-Jones’s was the Morte d’Arthur by Thomas Malory.  They were among the seven artists who decorated the debating chamber of the Oxford Union with Arthurian scenes.  Studies for the scheme are included in the show.

Preparatory drawings provide us with important information about how artists’ ideas evolved.  A rapid sketch, literally on the back of an envelope, was Holman Hunt’s first draft for The Light of the World (1851).  Drawing was the foundational skill championed by Ruskin, the PRB’s most important advocate.  Ruskin drew throughout his life.  He made delicate observations of natural history specimens, and many studies of buildings in Florence, Venice and Pisa.  His landscape paintings show how deeply he had absorbed the art of Turner; but his studies of rocks, flowers and leaves are more Pre-Raphaelite.  They adopt a style of hyperreal clarity and meticulous detail.  Passionate about teaching, he gave a large collection to Oxford University, to be used for instructing undergraduates and working people in drawing. Departing from academic training, Pre-Raphaelite landscape painters worked out of doors.  They aimed to capture the effects of sunlight and shadow and to include every detail that they could see.  They often chose surprising effects of atmosphere and colour, or depicted familiar subjects from unusual viewpoints.  Instead of using only transparent washes, they also worked with bodycolour (gouache) which produces intense colours.  Some went abroad to find spectacular scenery; others stayed in southern England and found beauty in simple, everyday scenes.  Their subjects range from the ancient city of Jerusalem (Thomas Seddon) to farm buildings near Whitchurch (George Price Boyce). Dr Xa Sturgis, Director of the Ashmolean, says: 'It is with regret that the Ashmolean has been obliged to withdraw the Russian art exhibition which had been planned and developed over many years.  The appalling and tragic events in Ukraine and the sanctions imposed and threatened on both Russia and the UK have made the exhibition logistically impossible.

'Our popular Pre-Raphaelite exhibition of 2021 was also affected by international events and ran for just five weeks last summer; so we are really pleased to have the opportunity to mount it again and allow many more people to see it as originally planned.  With an imminent gap in the programme, Museum staff jumped into action, rearranging work across multiple departments from Conservation, Gallery Technicians and Design, to Learning, Communications and Front of House.  They have pulled together another beautiful presentation of these amazing works of art.'

The exhibition is curated by Christiana Payne, Professor Emerita of History of Art, Oxford Brookes University. She says: ‘I am so pleased that the Ashmolean team has been able to adapt its plans to bring Pre-Raphaelites: Drawings and Watercolours back on show.  Works on paper, such as these, offer an intimate and profound insight into the work of this revolutionary group of British artists.  But drawings and watercolours are also fragile and require careful and limited display so they can be preserved for the enjoyment and study of future generations.  This is therefore a rare opportunity for people to see the drawings before they are returned to the Print Room and 'rested' from exposure to the light.  I encourage everyone to take this chance to see them in the exhibition galleries this year.' Dante Gabriel Rossetti (1828–82), Sir Lancelot’s Vision of the Sanc Grael: Study for Painting in the Oxford Union, 1857. Watercolour and bodycolour over black chalk on paper, 71 × 107 cm. © Ashmolean Museum,University of Oxford. Commentaires sur 'Pre-Raphaelites: Drawings and Watercolours' at the Ashmolean