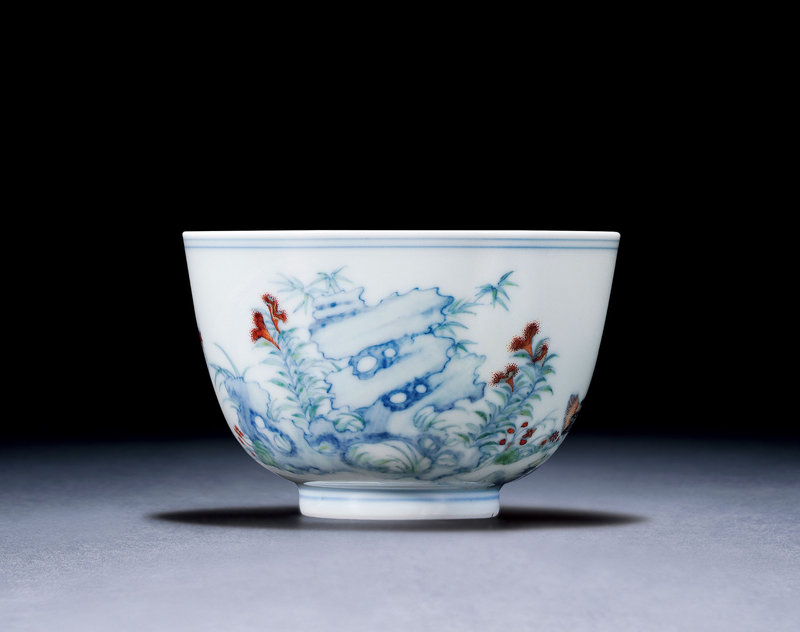 Note: This cup is finely painted with a cockerel, hen and five chicks among flowering plants. The deep rounded sides are further decorated with a gnarled and pierced rocky outcrop issuing coxcomb plants, all within pencilled underglaze blue outlines coloured in a soft palette of iron red, shades of green and yellow, between two double-line borders. The base is inscribed with six-character Chenghua mark enclosed within a double-square.

This exquisitely painted piece is an extremely rare version of chicken cups produced during the Yongzheng reign that were directly inspired by the treasured Chenghua originals. In form, composition and style of reign mark on the base, it closely follows the Chenghua prototype but with the slightest variation on the design, such as the more elaborate tails of the cocks instead of three long feathers. Furthermore, the proportions of the flowers and rocks have also been rendered in a more refined manner in accordance with the taste of the Yongzheng Emperor. Compare another cup sold at Christie’s Hong Kong, 31 October 2000, lot 911.

The design of a cock and a hen with chicks in a garden setting was a design innovation of the Chenghua reign, although the subject was a well-known topic of Song dynasty painting. By the Yongzheng period, developments in enamel technology saw the invention of glossy black enamel that was added to the tails of the cocks to capture the richness of the birds as well as provide an attractive calligraphic contrast with the doucai palette. The black on Chenghua cups was actually a dark colour derived by adding khaki-green enamel to underglaze blue, while the black enamel developed in the Kangxi period was matt and relatively unstable so required a layer of clear pale green or purple to be applied over the top.