LONDON.- Dazzling jewels from The Queen’s personal collection and iconic photographs of Her Majesty will go on display at Buckingham Palace from today (Friday, 22 July) as part of a visit to the Summer Opening of the State Rooms, open for the first time since 2019.

The special display Platinum Jubilee: The Queen’s Accession celebrates the start of Her Majesty’s historic reign and centres around 24 official portraits of The Queen taken by the photographer Dorothy Wilding. For the first time, Wilding’s original hand-finished prints are shown alongside items of jewellery worn by Her Majesty for the portrait sittings, some of which have never been on public display before.

Dorothy Wilding began taking photographs of members of the Royal Family in the 1920s. In May 1937 she became the first official female royal photographer when she was appointed to take the portraits at the coronation of King George VI and Queen Elizabeth. The 11-year-old Princess Elizabeth featured in the photographs along with her sister Princess Margaret, and the display at Buckingham Palace will include the embellished cream dress, purple robe and gold coronet worn by the young Princess for her parents’ coronation.

Ten years later in July 1947, Wilding was called upon to capture the official engagement portraits for Princess Elizabeth and Lieutenant Philip Mountbatten, and in February 1952 she was commissioned to take the first official photographs of the new Queen Elizabeth, just 20 days after the Accession. The series of photographs that Wilding took during this session and a second session two months later have become some of the most enduring images of the Royal Family, and of 20th-century Britain more generally, as they form the basis for the profiles and silhouettes of Her Majesty that we see on stamps and coins to this day. Many of the items of jewellery worn by The Queen for the portrait sittings held personal connections for the young monarch. They included a sapphire and diamond Cartier bracelet, which was given to her by her father King George VI as an 18th birthday present in 1944. Another birthday gift was the South Africa necklace, given to Princess Elizabeth for her 21st birthday by the Government and Union of South Africa. The necklace originally consisted of 21 brilliant-cut diamonds, but in 1952 it was shortened and the six removed stones were made into a matching bracelet, which will also be on display. 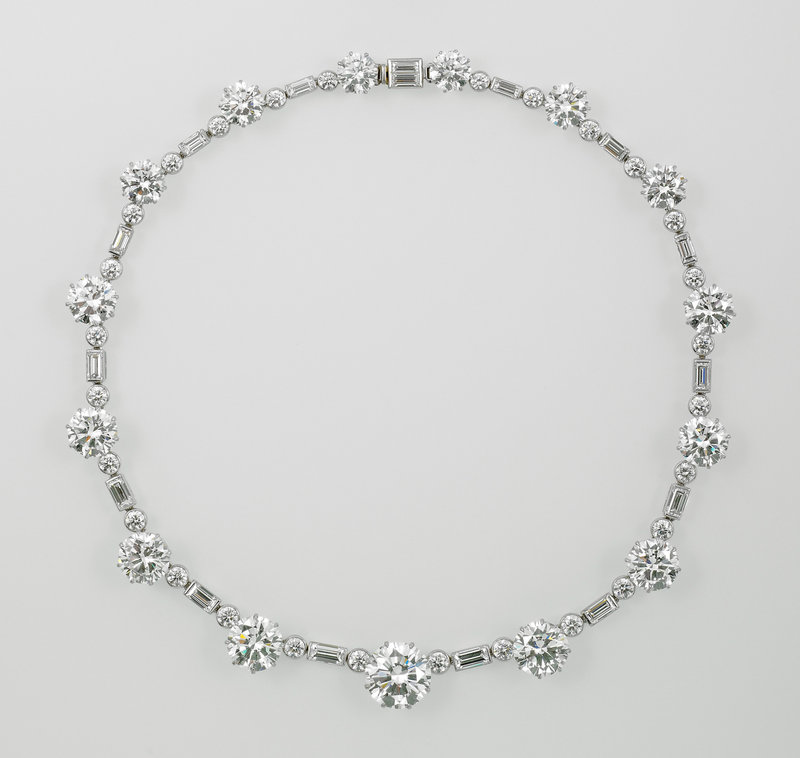 One of Her Majesty’s most recognisable jewels is The Girls of Great Britain and Ireland Tiara. The diamond tiara was a gift to the future Queen Mary, on the occasion of her marriage to the future King George V in 1893. Queen Mary in turn gave the tiara as a wedding present to her granddaughter, Princess Elizabeth, in November 1947, along with the Dorset Bow Brooch and a pair of diamond bangles. The bangles, on display for the first time, are thought to have been made in India, where traditionally one would be worn on each wrist to signify matrimony. Another wedding gift was the Nizam of Hyderabad necklace. The Nizam (ruler) of Hyderabad left instructions with the firm of Cartier in London that Princess Elizabeth should select a wedding gift herself, and this platinum necklace set with approximately 300 diamonds was chosen. The Queen wore the necklace for her second sitting with Dorothy Wilding in April 1952, and it was these photographs that were chosen to form the basis of Her Majesty’s image on postage stamps from 1953 until 1971. The second photographic sitting was organised so that additional portraits could be taken of The Queen wearing a coronet, as this was felt to be more appropriate for official use on coins and postage stamps. A crown could not be worn as the Coronation was not to take place until 2 June 1953, and so the Diamond Diadem was selected. Originally created for George IV’s extravagant coronation in 1821 and set with 1,333 brilliant-cut diamonds, the Diamond Diadem was worn by The Queen on the day of her Coronation and has been worn by Her Majesty on her journey to and from the State Opening of Parliament since the first year of her reign. The Queen’s final sitting with Dorothy Wilding took place in May 1956, shortly before Wilding retired. The portraits were commissioned by the Bank of England for new currency, though ultimately the images were not used. The Queen is shown wearing the Vladimir Tiara, which was made for Grand Duchess Vladimir of Russia around 1874 and sold by her daughter to Queen Mary in 1921. Inherited by The Queen in 1953, the tiara is unusual in that it can be worn in a variety of ways, as its pendant emeralds can be removed or substituted for pearls. Her Majesty also chose to wear the spectacular Delhi Durbar necklace for this final sitting. The necklace incorporates nine emeralds originally owned by Queen Mary’s grandmother, the Duchess of Cambridge, as well as an 8.8 carat diamond pendant cut from the Cullinan diamond – the largest diamond ever found. It was made for Queen Mary as part of a suite of jewellery created for the Delhi Durbar in 1911, and was inherited by Her Majesty in 1953. The accompanying emerald and diamond earrings will also be on display for the first time.