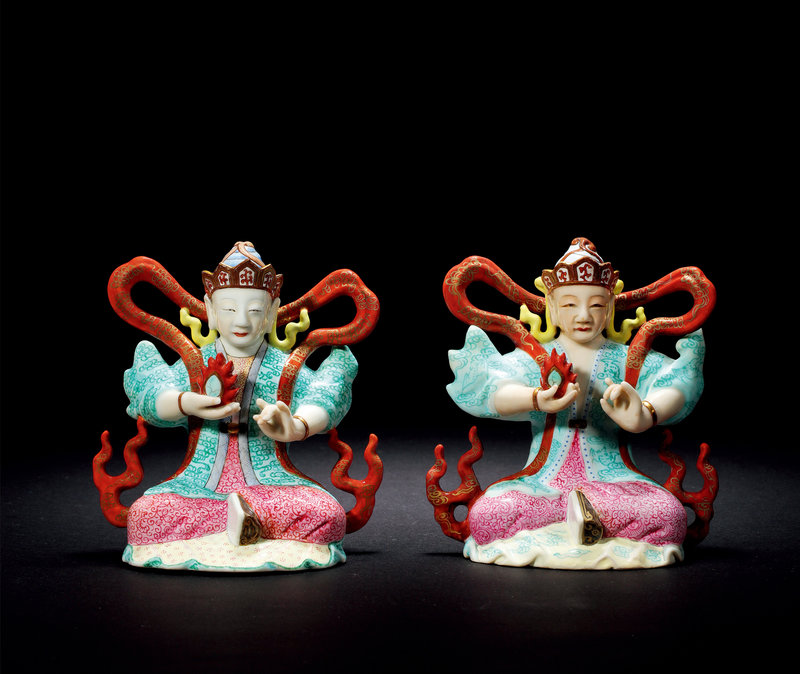 Note: This pair of famille-rose figures is one of the seven treasures of Tibetan Buddhism, with a seated civil official wearing a crown of lotus flowers and an official's robe, holding a dharma vessel in one hand and a dharma seal in the other, surrounded by a solemn and solemn image. The artistry of the porcelain sculpture demonstrates the high standard of the Qianlong dynasty.

The imperial family of the Qing dynasty believed in Tibetan Buddhism, and the Qianlong emperor was particularly fond of it. During his reign, he not only completed the engraving and printing of the Great Tibetan Sutra in Chinese, Manchu and Tibetan, but also built numerous Buddhist temples and pavilions in the Forbidden City and at various palaces. As the seven treasures were very popular with the emperor, they became an important part of the decoration of the court, and porcelain offerings and vessels were indispensable, as in the case of this example. Reference to a complete set of eighteenth-century seven treasures in the Chengde Summer Palace Collection, in Imperial China. The Living Past, Art Gallery of New South Wales, Sydney, 1992, no. 79.