A Rare Blue-Glazed Chrysanthemum Dish, Mark and Period of Yongzheng

A Rare Blue-Glazed Chrysanthemum Dish, Mark and Period of Yongzheng 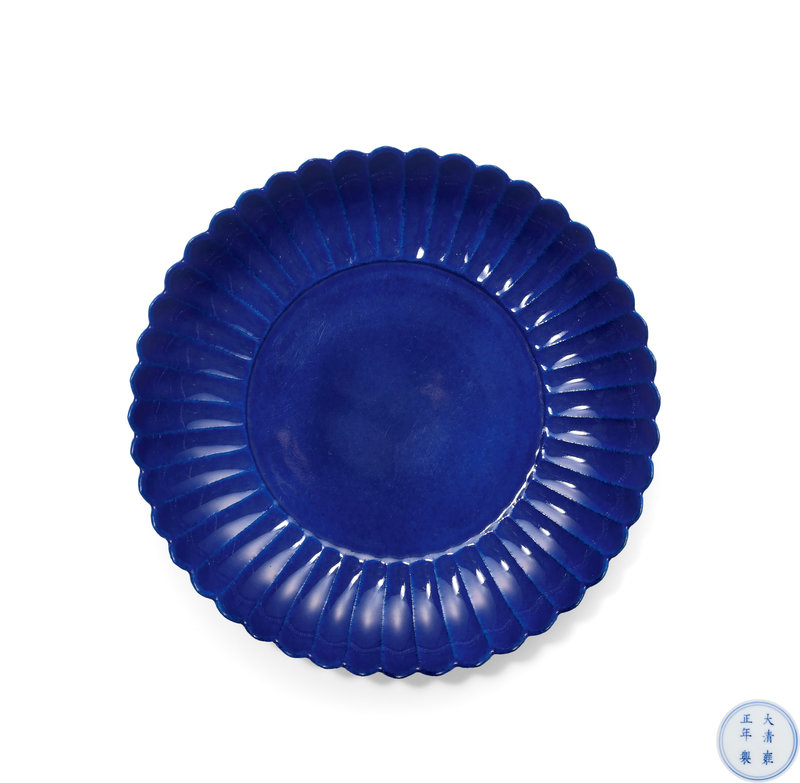 Note: This piece is of chrysanthemum petal form with shallow curved walls and a footrim. The petals are evenly distributed in size on the wall of the dish. The fine, dense, translucent body demonstrates the quiet elegance of Yongzheng-period wares and the extremely high standard of the manufacture. The blue glaze on the entire body is bright and fine, making the dish deeply intoxicating. The elegant shape of the dish, which is drawn in the form of an autumn chrysanthemum, is complemented by the even and lustrous glaze colour, which is a striking expression of the freshness and artistic charm of this vessel. The base of the vessel is double-ringed and marked 'Made in the Yongzheng period of the Qing dynasty' in regular script with two lines of six characters in blue and white.

The chrysanthemum-petal dish is a rare and valuable imperial kiln variety of the Qing dynasty, and a highly distinctive art object of the Yongzheng dynasty. According to the Qing Archives. According to the Records of the Yongzheng Period, in the eleventh year of the Yongzheng reign, 'on the twenty-seventh day of the twelfth month, Zheng Tian, a member of the family of Nian Xiyao, the head of the House of Internal Affairs, gave Song Tao twelve chrysanthemum plates of various colours, one of each colour inside. The treasurer and chief eunuch Samuha presented them to the court. It is decreed that this plate be handed over to the Department of Magnetic Ware Production to be made in the same way as forty pieces of each type. It is clear that the Yongzheng emperor was fond of this type of work. One of a set of Yongzheng chrysanthemum-petal dishes in the National Palace Museum is a good comparison.

It is also known as 'snowflake blue glaze' and 'sprinkling blue glaze'. It was created in Jingdezhen during the Xuande period of the Ming dynasty and matured during the Kangxi period of the Qing dynasty. It was made by dipping a bamboo pipe into the blue glaze and blowing it onto the surface of the vessel to form spots of varying thickness and depth; the rest of the white glaze appears to be falling snowflakes, hidden in the blue glaze. The blue-glazed porcelain of the Kangxi, Yongzheng and Qianlong periods is of a stable colour, and is a rare variety due to the complexity of the firing process and the relatively low success rate.