A Yellow-Ground and Underglaze Blue ‘Pomegranate’ Dish, Mark and Period of Zhengde (1506-1521)

A Yellow-Ground and Underglaze Blue ‘Pomegranate’ Dish, Mark and Period of Zhengde (1506-1521) 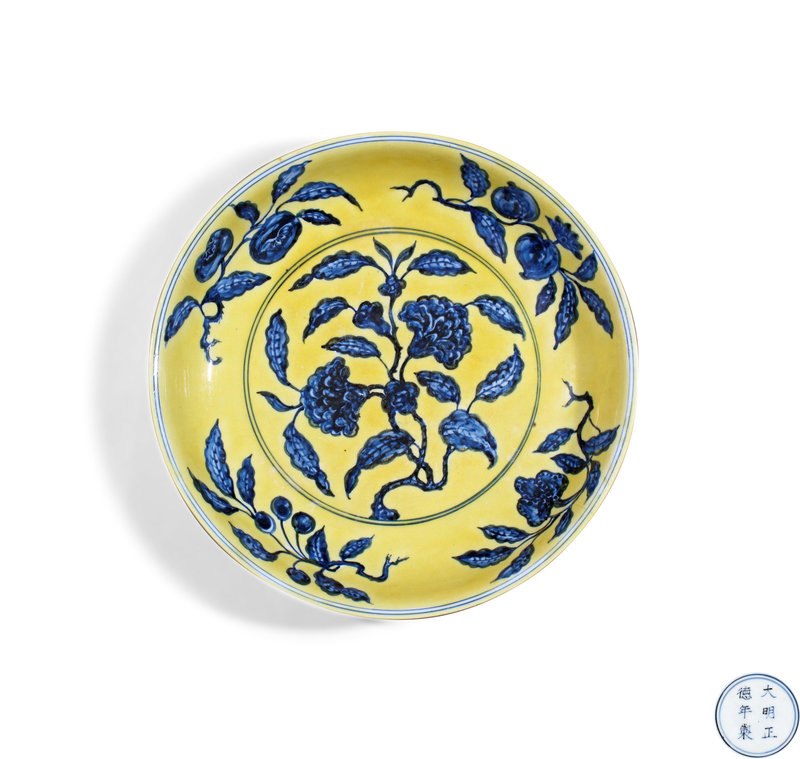 The dish, with an open mouth and curved belly, is beautifully evenly shaped, with a dignified and dignified form and a subdued air of grandeur. The interior is decorated with a pattern of folding pomegranate flowers, the heads of which are in full bloom, with some in bud, and with leaves surrounding them, making the form complete and well-spaced. The blue and white enamels are exquisitely rendered, and the yellow glaze is rich and thick, adding to the elegance of the two colours above and below. The base is inscribed in blue and white with a double-sided, regular script mark, Da Ming Zhengde nian zhi ('Made in the year of Zhengde').

Note: Yellow-ground celadon, first seen in the Xuande dynasty, is a new type of underglaze celadon combined with a low-temperature glaze. In the Qing dynasty, the 'Notes of the Southern Kiln' state that 'Xuande had blue and white flowers with a yellow ground'. Because of its lustrous colour, it was favoured by the emperors, as in the case of the present yellow-ground blue plate, which was most popular in the Hongzhi and Zhengde dynasties. Most of the plates are decorated with gardenia motifs in the centre, but very few are decorated with pomegranate flowers, as in the present example, and although the motifs are similar, there are variations on the inner wall. In addition to blue and blue flowers on a yellow ground, white flowers on a blue ground and white flowers on a brown glaze are also found, reflecting the Ming emperor's preference for this type of dish.

For a similar example, see the Greenwald Collection, Christie's, Hong Kong, 1 December 2010, lot 2805, and for a more common subject other than pomegranates, see an example from the Qing Palace Collection, of the same size as this one, with a six-character mark, now in Beijing. This example, of the same size as the present one, with a six-character mark, is in Beijing. Another example, of slightly smaller size, with a four-character mark on the foot, is included in the same book, plate 233; another example was excavated in Beijing and is now in the Capital Museum, see The Complete Collection of Chinese Ceramics, vol. 13, plate 147; this type of plate was also included in the Shanghai Museum, see The Shanghai Museum Collection, Research Series. For a few examples in the British Museum, see Ming Ceramics in the British Museum, plate 8:23; and similar collections in the National Palace Museum, Taipei, the Izumo Museum of Art, Tokyo, the Yasutaku Museum of Art, Osaka, and the Toguri Museum of Art, all of which are comparable.