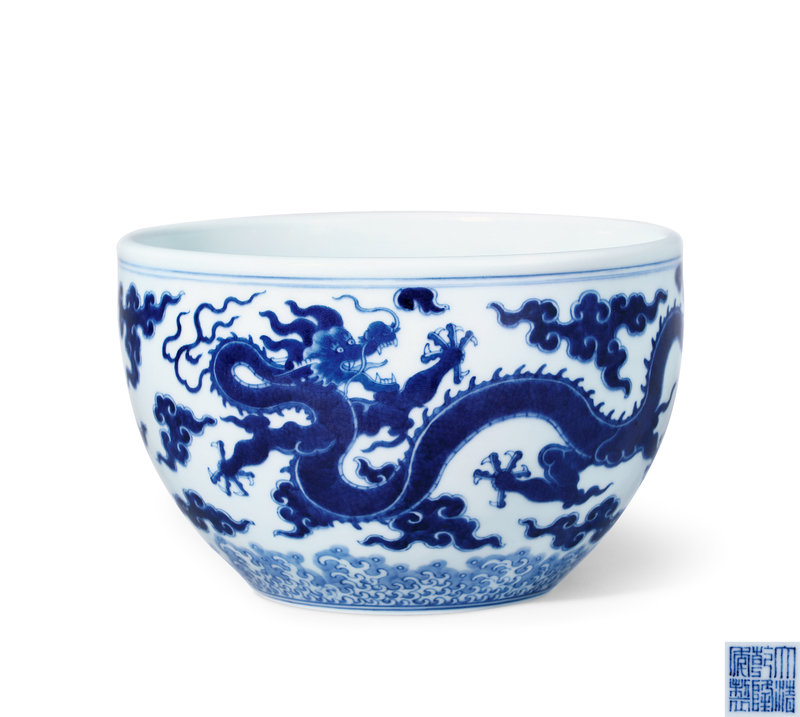 The lip and mouth, with a bulging belly and recessed neck, and a slightly concave flat foot, are of solid, regular form. The exterior is painted in blue and white with formalized clouds and dragons, the two dragons echoing each other in front and behind, with the sea beneath them and the flames of the clouds fluttering around them, giving them a lively and vigorous appearance. The foot inscribed in seal script, Qianlong nian zhi ('Made during the Qianlong period of the Qing dynasty').

Note: The shape is derived from the Jiajing dragon jar. Since the late Ming dynasty, the Jiajing official kilns have been very popular with the world. During the Yong-Qian period, Jiajing official kilns became an important copying object for the Yong-Qian dynasty, and were no less popular than the Yongxuan kilns. Records from the archives of the Office of the Builder also abound, for example, in The Records of the Office of the Builder for the Third Year of the Qianlong Era. Jiangxi" states that "On the 25th day of the 6th month of the 3rd year of the Qianlong reign, the seventh-ranking chief, Samuha, and the chief of the press, Bai Shixiu, came to say that the eunuch, Gao Yu, had handed over ...... a small blue dragon jar from the Jia kiln to the porcelain firing office, Tang Ying, and sent it to them as it was made. When the firing was completed, the original magnetic ware was returned to the magnetic ware store. The large vessels in this magnetism should be taken away with a drawing, and the small vessels should be taken with each other. This is the first time that a bottle of this type has been made. It is clear from this that this style of blue-and-white jar with dragons and clouds was ordained by the Qianlong emperor and copied in the third year of the Qianlong reign. An example of this type in the Nanjing Museum is recorded in The Palace Collection: Chinese Official Porcelain of the Qing Dynasty, Shanghai Culture Press, 2003, p. 274; an example in the Shanghai Heritage Store is illustrated in Appreciating Porcelain of the Qing Dynasty, Shanghai Science and Technology Press, 1994, p. 156, fig. 199.