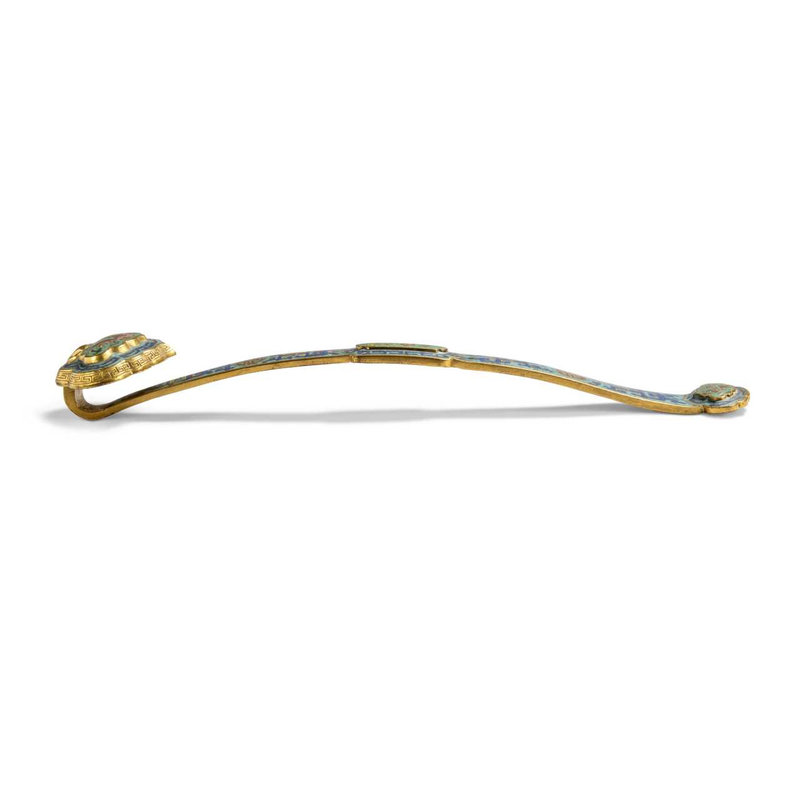 The ruyi-head terminal finely decorated in bright enamels with a pink and red bat below a blue swastika on a green ground, all within a a gilt border incised with a keyfret scroll, the shaft embellished with stylised archaistic scrolls and shou character roundels on a turquoise ground, the central section inset with an oval panel enclosing a flowering lotus stem, the reverse skillfully worked in gilt with bats in flight amongst swirling clouds and swastikas.

The Anthony and Marietta Coleridge Collection.

Note: Ruyi sceptres were popular in the 18th and 19th centuries and were given as gifts on auspicious occasions such as birthdays and festive occassions. They symbolize good fortune and the name signifies 'everything as you wish it'. The head of the ruyi is based upon a stylised form of the lingzhi fungus, which was believed to be able to prolong life.

They were made in a wide variety of materials including jade, lacquer, porcelain and precious woods such as zitan. Cloisonné examples were often inset with openwork gilt bronze panels, such as the ruyi sceptre in the Royal Scottish Museum in Edinburgh, illustrated by Sir H. Garner, Chinese and Japanese Cloisonné Enamels, London, 1962, pl. 69B or with jade panels such as the example sold at Christie's New York, 13-14 September 2018, lot 1211. The present lot may be compared with the cloisonne enamel ruyi sceptre dating to the Qianlong period decorated with bats, shou characters and key-fret bands sold at Christie's Hong Kong, 30 May 2006, lot 1559.