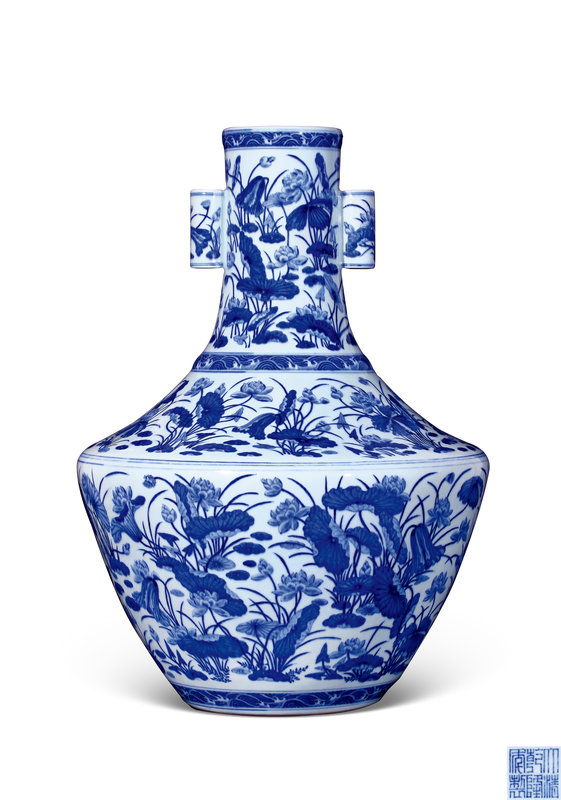 Note: This is a large and substantial bottle with a straight mouth and long neck, the sides of which are symmetrically decorated with vertical, tubular lugs, with folded shoulders, tapering below the shoulders, and a flat footrim, of solid, archaic form. The mouth, underside of the neck, and near the foot are each painted with a band of seawater. Above each ear is a group of lotus flowers. The neck, shoulders, and abdomen are painted with lotus blossoms and leaves of varying heights, in an intricate and orderly pattern that is fresh but not kitschy, elegant and dignified. The base is covered with white glaze, and inscribed in seal script 'Made during the Qianlong period of the Qing dynasty'.

The painting is very different from traditional Qianlong blue and white wares in that the lotus flowers, leaves, canopies and stems are depicted in a realistic manner, presenting an elegant scene of a summer lotus pond. The colour of the blue and white porcelain is subdued but not overly bright, and the layers are clearly defined, showing the shade of the lotus leaves and the flowering of the lotus with great accuracy. In Zhou Dunyi's famous essay 'Love of the Lotus', a famous phrase from the Song dynasty, 'to emerge from the mud without dyeing it, to wash it in the clear water without becoming a demon', the moral of the lotus' noble character has been highly praised by later generations of writers. The lotus flower is also a symbol of 'many sons and many blessings', making it an auspicious and festive motif. The overall decoration is magnificent and well preserved, with a strong Qianlong-period artistic style, making it an extremely rare and elegant piece of display ware. A rare example of this type is to be found in the National Palace Museum, Qing Palace Old Collection, in The Complete Collection of Cultural Relics in the National Palace Museum. Glazed Red in Blue and White (below), 2000, p. 144.

"The lotus is the absolute star of the summer water in the Summer Palace, both at Kunming Lake and at Houxi River. The Qianlong emperor was a great admirer of the lotus in summer, and not only did he include it in his paintings, but he also wrote many imperial poems about it. Among them were nearly 60 imperial poems about the lotus in Qing Yi Yuan (formerly known as the Garden of Harmony), including.

"I would like to take advantage of the relief to try out the lotus flowers along the western shore of the six bridges."
--In the twenty-third year of the Qianlong reign, the poem, "The lotus on the Kunming Lake," was written in the style of "Cultivating the lotus
"Out of the shade of the green willow, I know that the shore is far away; into the red lotus path, the boat is light."
--The Twenty-fifth Year of the Qianlong Era, 'A View from a Boat on Kunming Lake after the Rain'
"I have not been here for a few days, so I took advantage of the sunny day to look at the lotus along the river."
--The Twenty-sixth Year of the Qianlong Era (Kunming Lake Lotus Viewing)
"It has been more than a month since Kunming was flooded with lotus, but this is the right time for lotus after the rain."
-- Qianlong 33, 'A lotus view on Kunming Lake'