The Williamson Pink Star-One of the Purest, Pinkest Diamonds Ever to Appear at Auction To be offered at Sotheby’s this Autumn

The Williamson Pink Star-One of the Purest, Pinkest Diamonds Ever to Appear at Auction To be offered at Sotheby’s this Autumn 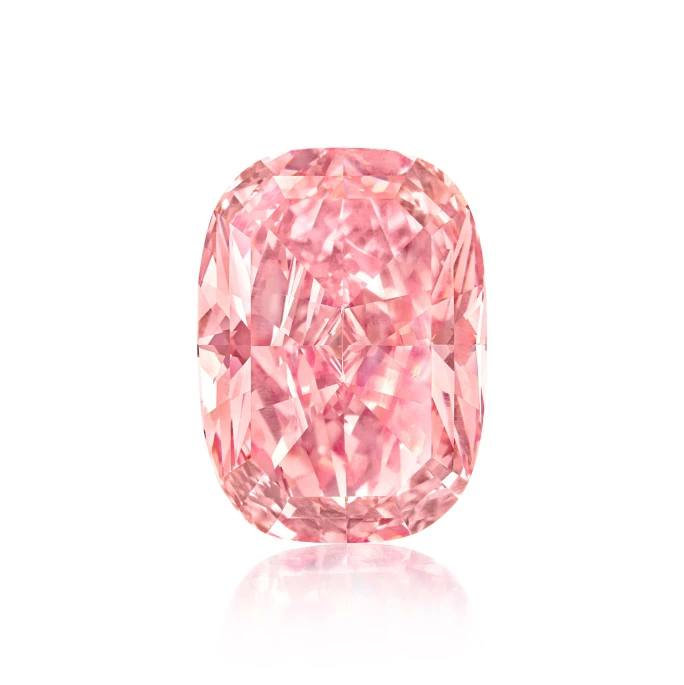 The Williamson Pink Star. One of Only Two Internally Flawless Fancy Vivid Pink Diamonds of Over 10 Carats Ever to Come to Auction. Expected to Realise in Excess of US $21 Million / HK$ 170 Million. © Sotheby's 2022

One of the world’s purest, most saturated pink diamonds is unveiled today at Sotheby’s London, ahead of a world tour, taking in Dubai, Singapore, Taipei and Hong Kong, where it will be offered in a standalone, single-lot auction on 5th October.

At 11.15 carats, the Williamson Pink Star is the second largest internally flawless fancy vivid pink diamond to ever appear at auction - outsized only by the record-breaking CTF Pink Star, the 59.60-carat oval mixed-cut diamond, which sold at Sotheby’s for US$71.2 million in April 2017, and still holds the world auction record for any diamond, gemstone or jewel. Such is the perfection and purity of the Williamson Pink Star that, with an estimate of US$21 Million / HK$170 Million, it has the potential to set a new per carat price record for a Fancy Vivid pink diamond.[1] Diacore, who were also responsible for manufacturing the 59.60 carat CTF Pink Star into its final form, also polished the Williamson Pink Star’s rough stone into the final faceted diamond that we see today.

Wenhao Yu, Chairman of Jewellery and Watches at Sotheby’s Asia, explains the rarity and importance of the stone: “The discovery of a gem-quality pink diamond of any size is an extremely rare occurrence - something that, with the recent closure of the Argyle mine, seemed until recently - highly improbable. Driven by a limited supply and rising demand, prices for top-quality large pink diamonds over 5 carats have increased exponentially over the past decade, serendipitously setting the scene for the appearance now of this one-of-a-kind stone.”

A natural wonder of nature, the extraordinary cushion-shaped stone has been named in homage to two legendary pink diamonds: first, the CTF Pink Star, noted above; and second; the celebrated ‘Williamson' stone – a brilliant-cut diamond of 23.60-carats given as a wedding present to Her Majesty Queen Elizabeth II in 1947 by the Canadian geologist and royalist, Dr. John Thorburn Williamson, who owned the Williamson mine in Mwadui, Tanzania, where it was discovered.

One of the oldest operating diamond mines in the world, the Williamson mine is famous for producing fine “bubblegum” pink diamonds, perhaps the most famous example of which is the Williamson Pink Diamond currently owned by Her Majesty Queen Elizabeth II to whom it was gifted by John Williamson, the original owner of the Williamson diamond mine from which The Williamson Pink Star, also originates. Cut from a 54.5 carat rough diamond into a 23.6 carat round brilliant-cut diamond, the jewel became the centerpiece of a brooch designed by Cartier, that has become one of The Queen’s favourites.

Yielded from a 32-carat rough diamond at the Williamson Mine in Tanzania, the Williamson Pink Star has since been masterfully cut into a dazzling cushion-cut, bringing out the diamond’s innermost beauty to full display. 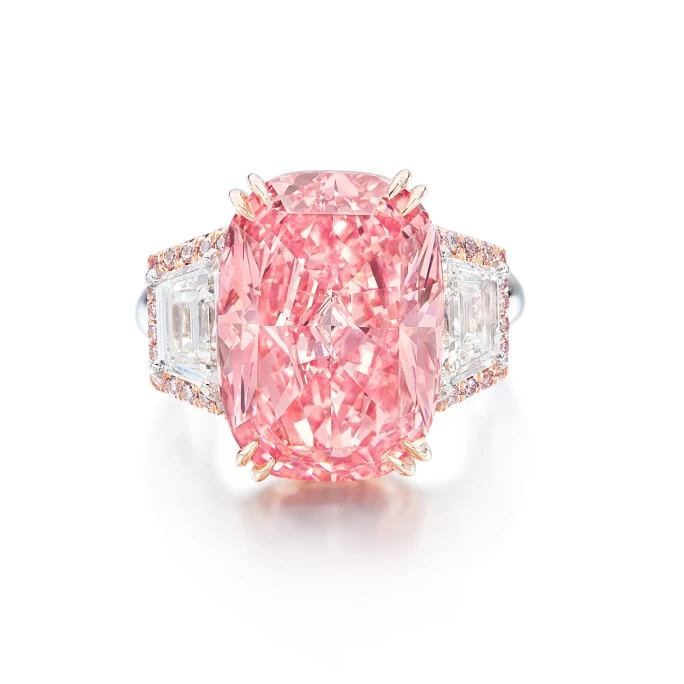 The Williamson Pink Star presented in an 18k gold ring flanked by trapeze-cut diamonds and embellished with brilliant-cut diamonds. © Sotheby's 2022

Pink is one of the rarest colours to occur naturally in diamonds: of all the diamonds submitted to GIA, less than 3% are classified as colored diamonds, and less than 5% of those are considered predominantly pink. And even of the miniscule number classified as pink, only the tiniest proportion are of strong enough colour to classify as ‘Fancy Vivid Pink,’ most of which are relatively small in size. A Fancy Vivid Pink diamond, weighing over 10 carats is therefore of the utmost rarity. Not only has the diamond received the highest colour and clarity grades, it has also been found to be part of the rare subgroup comprising less than 2% of all gem diamonds - known as Type IIa. Stones in this group are chemically the purest of all diamond crystals and often have extraordinary optical transparency.

Curiously, what gives pink diamonds their coveted colour remains a mystery. Whereas other diamonds take their hue from specific trace elements, such as nitrogen for yellow diamonds, or boron for blue diamonds - the cause of the pink hue is still not fully understood. It is thought that the colour is caused by a distress in the atomic level, during the stone’s formation process deep within in the earth. 'With its unique color, considerable size, and dazzling brilliant cut, the Williamson Pink Star is both a work of nature and a work of art, establishing its place among the most fascinating colored diamonds'. GEMOLOGICAL INSTITUTE OF AMERICA (GIA) MONOGRAPH

'The Williamson Pink Star diamond is among the rarest of all gemstones - Attaining a Fancy Vivid color grade with pink diamonds in this size requires a very strong inherent bodycolor in the rough crystal. It is unusual for pink diamonds to occur with a strong depth of color or saturation in any size. In addition to its exceptional color, the clarity is Internally Flawless – a special combination. Examples such as this are some of the rarest gems ever discovered.' EXCERPT FROM THE GIA LETTER.

Commentaires sur The Williamson Pink Star-One of the Purest, Pinkest Diamonds Ever to Appear at Auction To be offered at Sotheby’s this Autumn