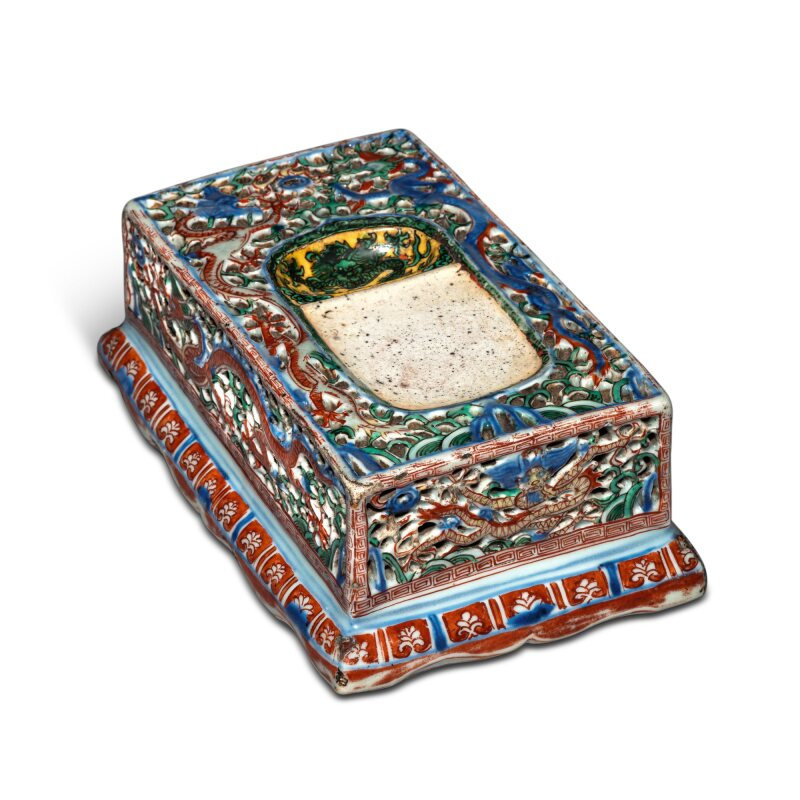 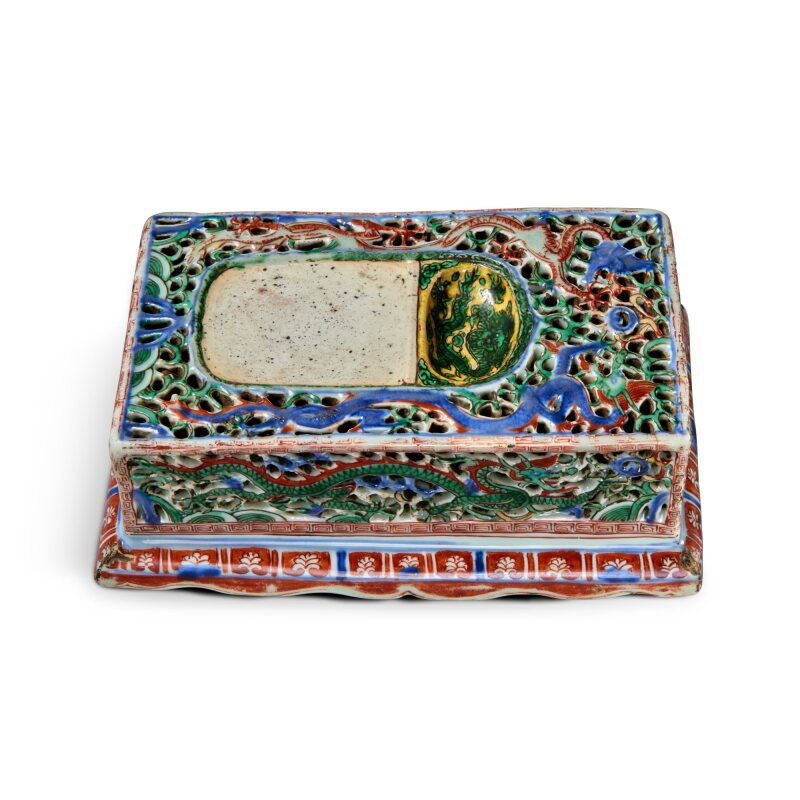 the base with a six-character mark in underglaze blue within a double rectangle, Japanese wood box (3).

Property from a Japanese Private Collection.

Note: Lavishly decorated with openwork designs of dragons chasing 'Flaming Pearls' over waves, and the base painted with two five-clawed dragons encircling the reign mark, this bright and colorful inkstone is very rare and there are only a handful of comparable examples. Wucai wares of the Wanli period (1573-1620) represent one of the most exuberant types of porcelain of the Ming dynasty (1368-1644) and are characterized by their vivid colors and vibrant designs. It was also during the long reign of Wanli Emperor that the imperial kilns designed porcelains specifically for the writing desk, including brush rests, brush boxes, brush trays, and inkstones.

Only five other examples of similar design appear to be recorded. One from the Sir Percival David Foundation of Chinese Art in the British Museum, London (accession no. PDF.747), was included in the International Exhibition of Chinese Art, Royal Academy of Arts, London, 1935, cat. no. 1966, and illustrated in Rebecca Feng, Illustrated Catalogue of Ming and Ming Style Polychrome Wares in the Percival David Foundation of Chinese Art, London, 2006, p. 32, no. 747. Another one in the Fogg Museum, Cambridge, from the collections of J. Love and Samuel C. Davis, exhibited in The Arts of the Ming Dynasty, Detroit Institute of Arts, Detroit, 1952, cat. no. 177, is illustrated in R. L. Hobson, The Wares of the Ming Dynasty, London, 1923, pl. 37, fig. 2. A third example in the Ashmolean Museum, Oxford (accession no. EA1980.403), is illustrated in Daisy Lion-Goldschmidt, Ming Porcelain, London, 1978, pl. 199. A further example in the Yamato Bunkakan Museum, Nara, is illustrated in Sekai tōji zenshu / Ceramic Art of the World, vol. 14: Ming, Tokyo, 1976, pl. 206; the fifth, illustrated in Mayuyama, Seventy Years, vol. 1, Tokyo, 1976, pl. 911, was sold in our London rooms, 11th June 1996, lot 35.

A less elaborate Wanli mark and period wucai inkstone lacking the openwork and painted with stylized lappets, foliate and lingzhi motifs on the borders belongs to the Huaihaitang Collection, exhibited in Enlightening Elegance. Imperial Porcelain of the Mid to Late Ming. The Huaihaitang Collection, Art Museum, Institute of Chinese Studies, The University of Hong Kong, Hong Kong, 2012, cat. no. 93.