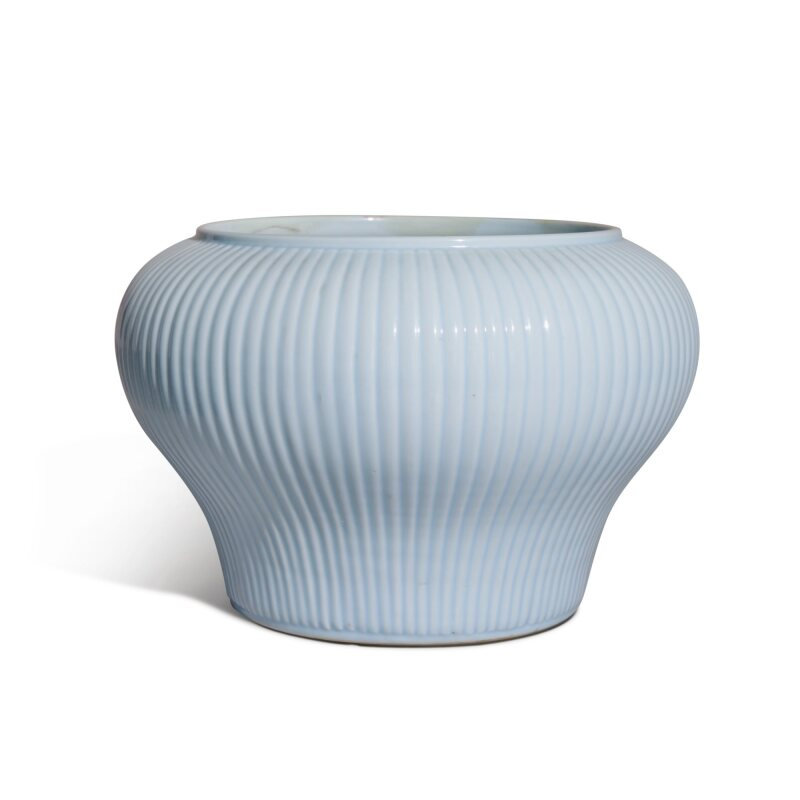 Property from an American Private Collection.

Note: The present jar is remarkable for its precisely potted large form which has been covered in a luminous clair-de-lune glaze. This high-fired glaze, with a cobalt content of about 1%, was first produced by the imperial kilns in Jingdezhen during the Kangxi Emperor’s reign. Known in the West by the 19th-century French connoisseurs’ term clair-de-lune (‘moon light’), and in China as tianlan (‘sky blue’), it was one of the most successful monochrome glazes created in Jingdezhen during the Kangxi reign, its soft hue reserved exclusively for imperial porcelains. The color remained popular throughout the Qing dynasty, but after the Kangxi period lost its delicate tone. A closely related jar from the Edward T. Chow Collection was sold in our Hong Kong rooms, 25th November 1980, lot 73; and another from the J.M. Hu Collection, illustrated in Qing Imperial Monochromes. The Zande Lou Collection, Shanghai, Beijing, Hong Kong, 2005, pl. 32, was sold in our Hong Kong rooms, 4th June 1985, lot 29. See also one sold in our London rooms, 10th July 1979, lot 203, and again in these rooms, 20th May 1980, lot 98; two further jars sold in these rooms, one from the collection of William L. Parker, 11th May 1978, lot 212, and the other, 4th December 1984, lot 345; and two recently sold in our Hong Kong rooms, 5th April 2017, lot 1111 and 3rd April 2019, lot 3655.

The form of these jars derives from Longquan celadon wares of the 14th century, which were made with covers in the form of a lotus leaf, such as one from the collection of the Ottoman sultans and now in the Topkapi Saray Museum, Istanbul, included in Regina Krahl, Chinese Ceramics in the Topkapi Saray Museum, Istanbul, vol. I, London, 1986, pl. 213; and another, in the Tokyo National Museum, Tokyo, published in the Illustrated Catalogue of Tokyo National Museum. Chinese Ceramics II, Tokyo, 1990, cat. no. 14.

In the later Qing period, jars of this type may have been described as 'Ru-glazed', and the ribs referred to as ‘hundred folds’ (baizhe). According to the inventory of the Qing imperial court archives, dated to the twelfth month of the eleventh year of the Guangxu period (in accordance with 1885), Ru you ci baizhe xiao yugang yi kou or ‘a small Ru-glazed hundred-fold fish jar’ was stored in the porcelain quarter of Fangyuanju (Residence of the Aromatic Garden) in the Imperial Summer Palace at Chengde.