A limestone seated figure of a Buddhist lion, Tang dynasty

A limestone seated figure of a Buddhist lion, Tang dynasty 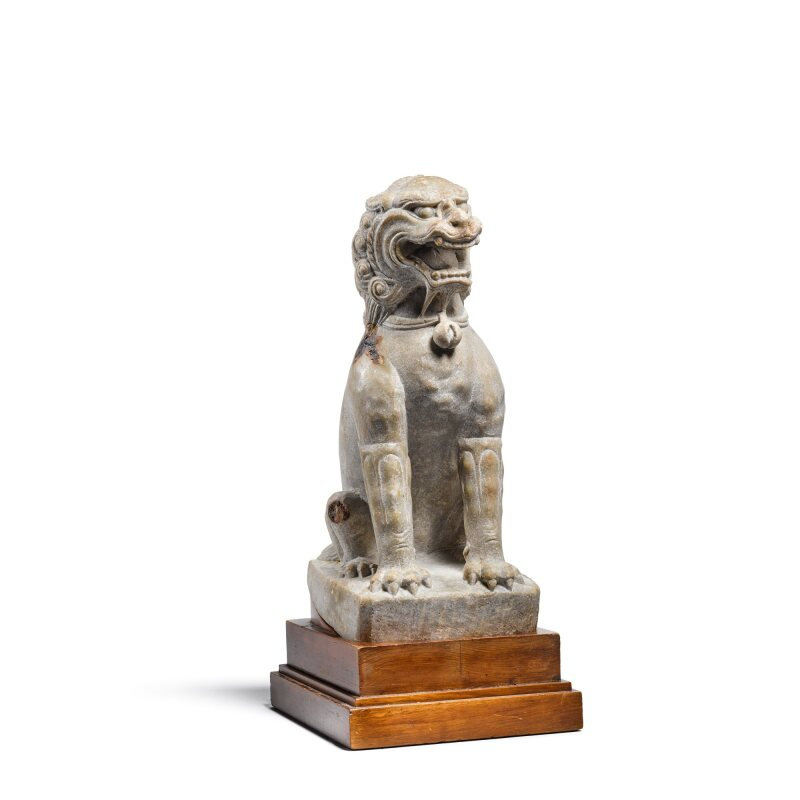 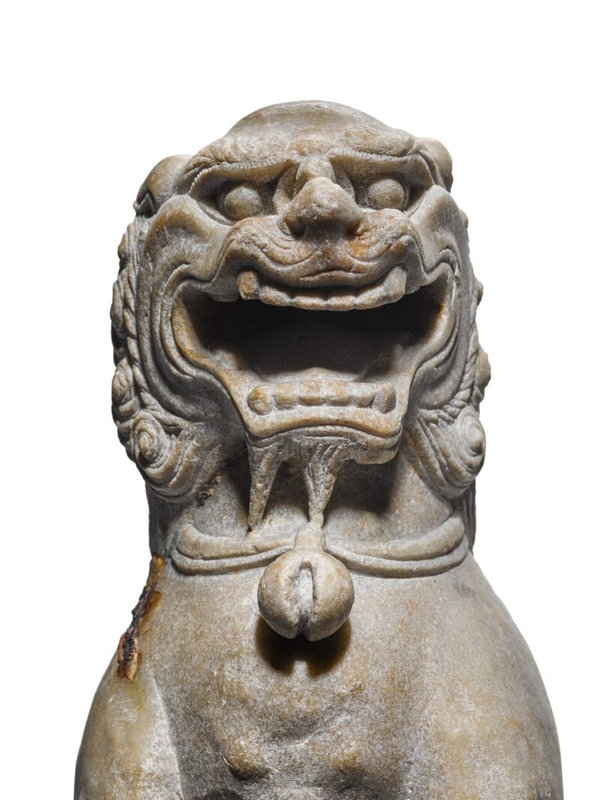 shown seated on its taut haunches with both forelegs extended and head facing forward on a rectangular plinth, the ferocious beast portrayed with its mouth open in a roar and baring its teeth, depicted with bulging eyes with incised pupils set in an intense gaze below furrowed bushy brows, the thick mane trails in rows of layered curls, the neck adorned with a beribboned bell with the ribbon tied into a neat bow on the back, old wood stand.

Note: This powerfully modelled lion is a magnificent legacy of the high Tang era, remarkable for its naturalistic rendering and its poised yet fierce posture. Its muscles ripple beneath the skin, exemplifying the beast’s vigorous and nimble nature; its ferociousness is immediately grasped through the piercing eyes and the gaping mouth revealing the animal’s teeth. This sensitive modelling marks an important stylistic shift from the highly stylised and primitive depictions of lions of the preceding Northern Qi (550-577) and Sui (581-618) dynasties and displays the vitality and boldness of Tang sculptures.

The Tang dynasty saw an unprecedented blossoming of the arts, resulting from political and military stability and a general openness to foreign trade. Lions were among the most prized tributary items presented to the Tang court by emissaries from the western regions of India and Central Asia. After receiving a lion as tribute from Samarkand in 635, Emperor Taizong (598-649) is recorded to have commissioned a poem in its honour from the court poet Yu Shinan (558-638). Lions were sent from Samarkand, Khotan and as far as the Arabian Peninsula.

Tang carvers and artists strived to successfully display the animal’s majestic savagery and bestial strength. A description of a lion painting by the 8th-century painter Wei Wutian exemplifies this trend: “When foreign countries presented lions to the court, he made paintings of them that were strikingly lifelike. Later, the lions would be returned to their homes, and only their paintings were kept; even so, whenever the pictures were unrolled, any other animal that caught sight of them would be terrified” (Alexander C. Soper, ‘T’ang Ch’ao Ming Hua Lu: Celebrated Painters of the T’ang Dynasty, by Chu Chung-hsuan of T’ang”, Artibus Asiae, XXI, 1958, p. 217).

No animal commanded greater respect and attention at the Tang court than the mighty lion. Ferocious and endowed with regal essence, the lion was revered for the powerful protective force it exudes, in addition to its role as a guardian figure and emblem of power. They also have had strong associations with Buddhism; the dharma is said to be spread through the lion's roar and they were frequently portrayed as the mount for the Manjushri Bodhisattva. With the growing popularity of the Buddhist religion during the Tang dynasty (618-907), pairs of lion figures were increasingly placed in front of Buddhist temple gates as guardian animals. Pairs of large stone lions were also found at the entrance to the imperial Tang mausoleums, see Ann Paludan, The Chinese Spirit Road: The Classical Tradition of Stone Tomb Statuary, New Haven, 1991, col. pl. 11 and pl. 126.

The present piece, more compact than those created with the function of guarding the spirit road, displays equally powerful and naturalistic modelling that represents the height of Tang period sculptural tradition. It is particularly rare and interesting to find a beribboned bell strapped around the lion’s neck, reflecting a drastic change in perception of the relationship between nature and man. In the preceding dynasties, animals were often depicted in unrestrained stances or in prowling positions, intending to illustrate their unbridled, untameable strength. However, in the Tang dynasty, this notion was replaced by an affirmation of man’s dominion over the natural world; wild beasts no longer claim equality with man. As seen in the present piece, the commonly untamed beast is collared and depicted in a rather restrained sitting position, symbolising its role to serve the will of man.

For Tang sculptures of lions housed in important museums, see a similar white marble lion, displaying an equally fierce demeanour, formerly in the collection of Dr Otto Burchard and now preserved in the Nelson-Atkins Museum of Art (object no.: 46-85), illustrated in the exhibition catalogue The Arts of the T’ang Dynasty, Los Angeles, 1957, cat. no. 41; another example of smaller size from the collection of Alice Boney, illustrated ibid., cat. no. 43. Compare also a limestone example of smaller size, illustrated in Two Thousand Years of Chinese Sculpture, J.J. Lally & Co., 2008, cat. no. 14. Sculptures of lions were also executed in other materials; see a puddingstone example, from the collection of C. T. Loo and now preserved in the Metropolitan Museum of Art (accession no. 24.74), illustrated in Alan Priest, Chinese Sculpture in The Metropolitan Museum of Art, New York, 1944, cat. no. 35, pl. LXXVI. For examples sold at auction, see a large marble lion from the collection of Christian Humann and Robert Hatfield Ellsworth, sold at Christie’s New York, 17th March 2015, lot 16; and a black stone lion from the collection of Arthur M. Sackler, first sold at Christie's New York, 1st December 1994, lot 164 and again in these rooms, 1st April 2019, lot 3029. 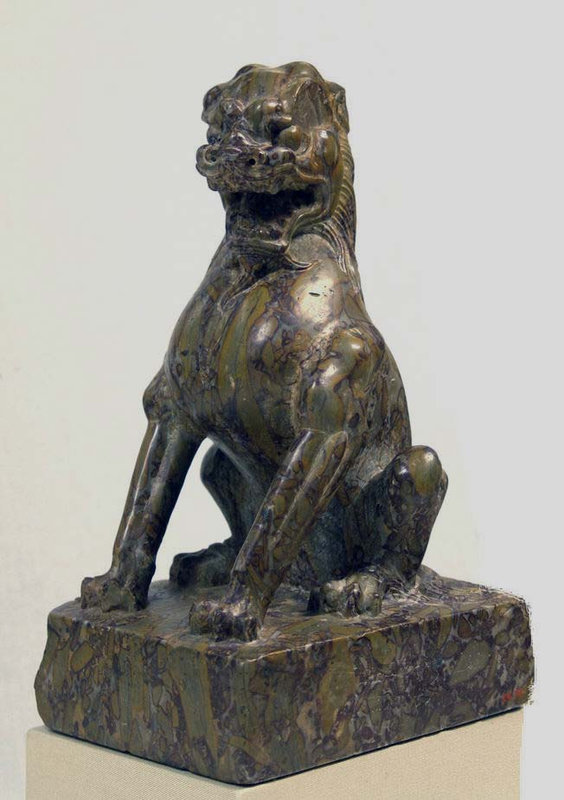