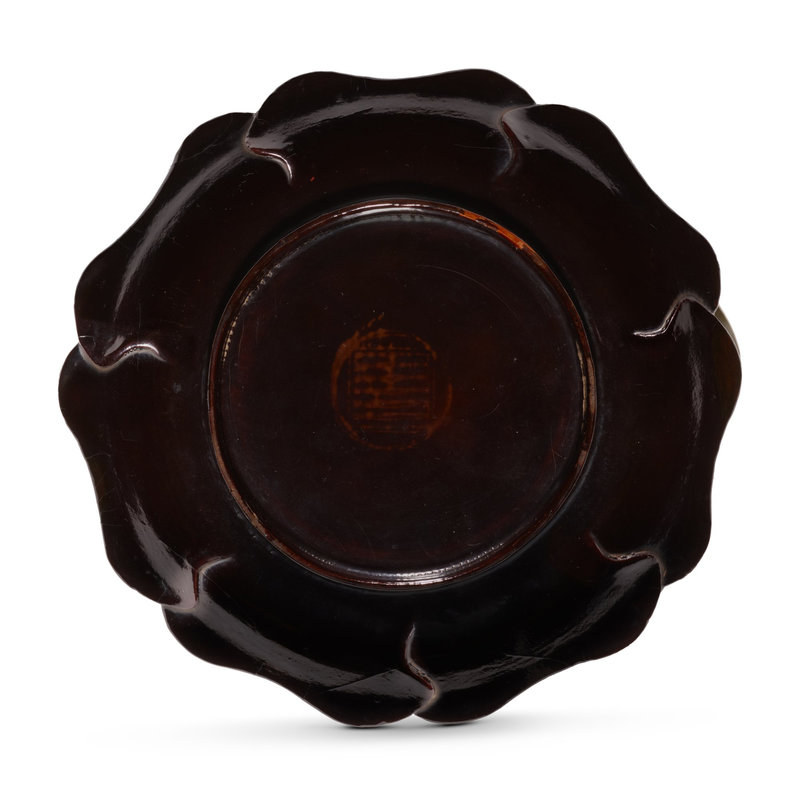 elegantly constructed with shallow everted sides in the shape of seven overlapping mallow petals, divided by S-shaped ridges delicately carved on the interior and underside, covered overall in an attractive black lacquer, the countersunk base with a seal mark, wood stand and Japanese wood box.

Note: The newly established Song dynasty and subsequent changes in the distribution of wealth and resources, birthed a renewed discovery of the beauty of nature. This fresh aesthetic celebrated ideals of classical beauty, creating the Song dynasty lacquerware which evoked an understated elegance and sense of perfection.

The Song rule aimed to revive romanticised concepts of antiquity based on Confucian Han ideals, while also trying to establish an identity that deviated from that of the Tang. Thus, the Song scholar-elite promoted commercial liberalism which granted much more freedom to the activities of merchants, brokers, and landowners. The Capital became a vibrant urban hub, and a wealthy upper-class was formed. Because silver had become the Song currency of payment, hence less available, and goldware was restricted to the court, the development of exquisite materials such as lacquer flourished.

The mallow flower was one of the most popular forms of lacquerware during the tenth to fourteenth centuries. Many of these pieces were made with cores of wood in the laborious quandie method, or with a lacquer-stiffened textile core. These methods allowed craftsmen to create complex lobed shapes and gave the wares a weightless quality, as demonstrated by the current dish. The mallow flower here represents longevity and a fulfilling life. See two similar but slightly smaller examples, sold in these rooms, 8th October 2013, lots 142 and 147 (17.7 and 14.9 cm), from the collection of Sakamoto Goro.