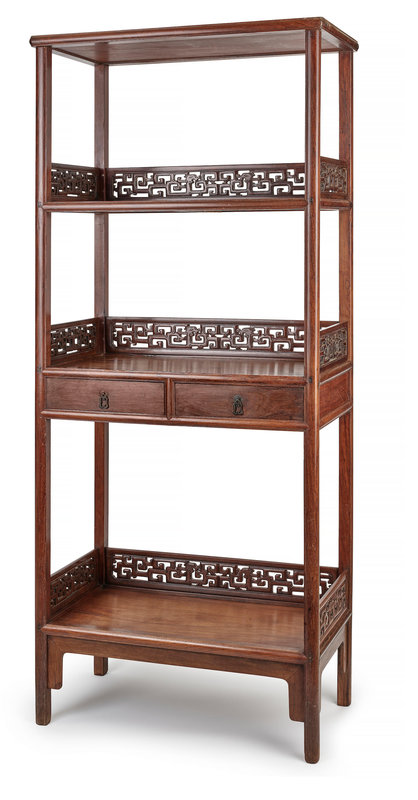 Of rectangular form and standard mitre, mortise and tenon construction, the round slender corner posts framing the softwood top panel and three shelves, one of which surmounts a pair of drawers, and secured around the shelves by a three-sided openwork railing comprising of kuilong patterns, the corner posts extending to form the feet, joined by plain apron and spandrels.

Note: The present lot is notable for the added decorative touch of the intricately-reticulated three-sided kuilong galleries, elegant proportions and extravagant use of high-quality huanghuali wood.

Bookcases shuge are open-shelf stands with three-sided railing to hold the books in place and to prevent them from falling, see Zhongguo gudian jiaju shoucang yu jianshang quanshu, vol.1, Tianjin, 2005, p.179. Bookcases were also a symbol of culture and education as an important feature in any scholar's studio. Open-shelving fulfilled two roles, as it allowed scholars to create elegant displays of scholar's objects and also functioned for storage of albums and books.

Compare with a huanghuali and wumu four-shelf bookcase in the Minneapolis Institute of Arts, illustrated by R.D.Jacobsen and N.Grindley, Classical Chinese Furniture in the Minneapolis Institute of Arts, Minneapolis, 1999, pp.142-43, no.49. See also another huanghuali bookcase, Ming dynasty, illustrated by Wang Shixiang, Connoisseurship of Chinese furniture, Beijing, 2007, p.142, D6, where the galleries are elaborately carved with cruciform-latticework.