Discover the natural wonders of the world & its ancient civilizations: Hindman to present a cabinet of curiosities

Discover the natural wonders of the world & its ancient civilizations: Hindman to present a cabinet of curiosities CHICAGO, IL.- Step into a cabinet of curiosities this November 10th with Hindman’s Ancient Art & Natural History: A Cabinet of Curiosities auction. Highlighting the auction is a rare and completely preserved iridescent ammonite fossil from 75 million years ago. Fast forwarding in history to another monumental moment, the auction concludes with the manual used by NASA to put a man on the moon in 1966. Presented alongside these items are works from ancient civilizations that reveal a better understanding of our shared history through material culture. This 200-lot auction is the ideal opportunity for collectors to develop their own “cabinet of curiosities.”

“Lunar meteorites are considered the rarest substance on Earth and date back to the birth of our solar system. To be able to physically offer a piece of the moon is thrilling,” commented Hindman’s Director and Senior Specialist for Antiquities Jacob Coley. “A treasure that is truly out of this world.” Note: Formed at the mantle-core boundary of an asteroid this 'Space Gem' dates to the birth of our solar system and is one of the most exquisite type of meteorites known.

Following, a vibrantly colored, iridescent ammonite fossil (lot 5; estimate: $100,000-120,000), recognized around the world due to its rarity and striking appearance, will be offered. From the late Cretaceous period, circa 75 million years ago, this fossil stands out with its opalescent exterior and constantly shifting colors, changing with the light from vivid reds to emerald greens, to flickers of orange and gold, purples and brilliant blues. This effect is a natural result of the fossilization process, a unique phenomenon only found on ammonites recovered from single location in Canada. Note: A magnificent example of one of the most spectacular fossils. An extremely fine and intensely vibrant ammonite, the surface of this long extinct marine creature has transformed over millennia into a dazzling, iridescent gemstone. Its colors constantly shift with the light from vivid reds to emerald greens, to flickers of orange and gold, purples, and brilliant blues. This stunning effect is a natural result of the fossilization process, a unique phenomenon only found on ammonites recovered from one location in Canada. Most fossils of this kind are heavily restored, or pastiches, and their color is artificially enhanced with varnishes. This is a completely preserved, natural piece with its original surface.

Following the presentation of early geological material, highlights will include historically significant Greco-Roman vessels. A monumental Attic black-figured column-krater, circa 525-475 B.C (lot 77; estimate: $30,000-50,000) is an incredible display of artistry. Depicting a chariot race, one of the most prestigious events at all the Panhellenic games held in Greece, this column-crater must have pleased the symposiasts whose wine was mixed in it. Note: The chariot race was the most prestigious event at all the Panhellenic games held in Greece. Only the wealthiest of families could afford the four-horse chariot (quadriga) and professional driver needed to enter the competition. This exceptionally large column-krater with depictions of chariots must have pleased the symposiasts whose wine was mixed in it.

The subject of the principal side is a chariot procession with Athena standing in the box of a quadriga. The panel is ennobled with three additional Greek gods: Apollo and his lyre, Hermes with his winged shoes (petasos), and Artemis with a young stag at her side. The two male figures on the reverse side comprise a different kind of chariot procession, that of the hunt. Both men are shown bearded and gripping spears. The first man mounts a quadriga, readying for departure while the second man looks back, and a molossian hound waits patiently to lead the way forward. Across the thick flat rim, a pride of lions and passel of wild boar faceoff between two large palmettes. Property from a Midwest Private Collection.

Note: Depicted here is the Nile God Hapi wearing a crown incorporating papyrus and lotus. In ancient Egypt, Hapi personified the annual inundation of the Nile River. The arrival of fertile soil by-way-of the flood was imperative for growing crops to sustain the economy and livelihood of the ancient Egyptians. For that reason, Hapi was associated with fertility and illustrated as having both male and female bodily attributes, as can be seen on this relief. Property from the Collection of Dr. David Girgenti, Rockford, Illinois.

Note: To the uninitiated, Egyptian art may seem both hieratic and static. However, an orderly and gradual evolution is discernable in the artistic achievements of this culture. The most copied style of ancient Egyptian art comes from the Old Kingdom. Much the way Europe looked to the art of ancient Greece as the embodiment of the ideal, so too did later dynasties look to the 'Age of the Pyramid Builders' for inspiration and convention.

This limestone relief from the Old Kingdom was once colorfully painted and adorned the walls of a nobleman's tomb. The two hieroglyphic captions at the top can be understood individually as: "tying up a young oryx (antelope)" and "butchering meat" or together as "bind the antelope for a choice cut". The butchery scene is clearly carved according to fixed conventions. Each figure is in the typical "frontality" style with their heads forward facing and all set in an exact median line. Slightly unusual is the figure of the man in the center, who holds the antelope's leg, in true profile. The slight difference in tradition could be explained by the hand of a provincial artist working during the early part of the 6th Dynasty. This period saw the weakening of central government in favor of provincial lords which would eventually break up the kingdom and leave Egypt to anarchy. 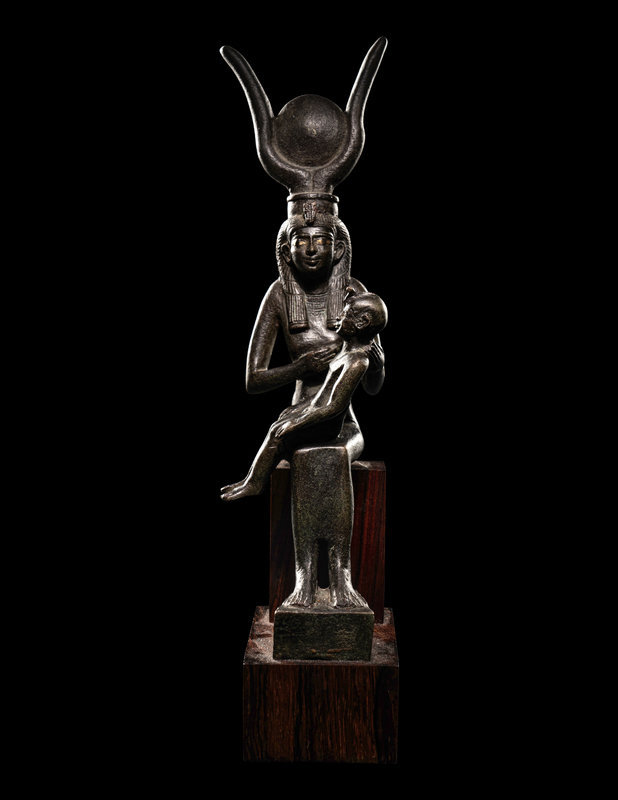 Note: Solid cast and well modelled, this bronze statue portrays a seated Isis nursing the child-god Horus. Her face is serene with a gentle smile and almond shaped eyes inlaid with silver. She offers her left breast with one arm while supporting Horus with the other. This tender pose became most common during the Late Period when Isis was primarily known as the mother of Horus and worshipped for protection of children from dangerous animals and evil spirits. 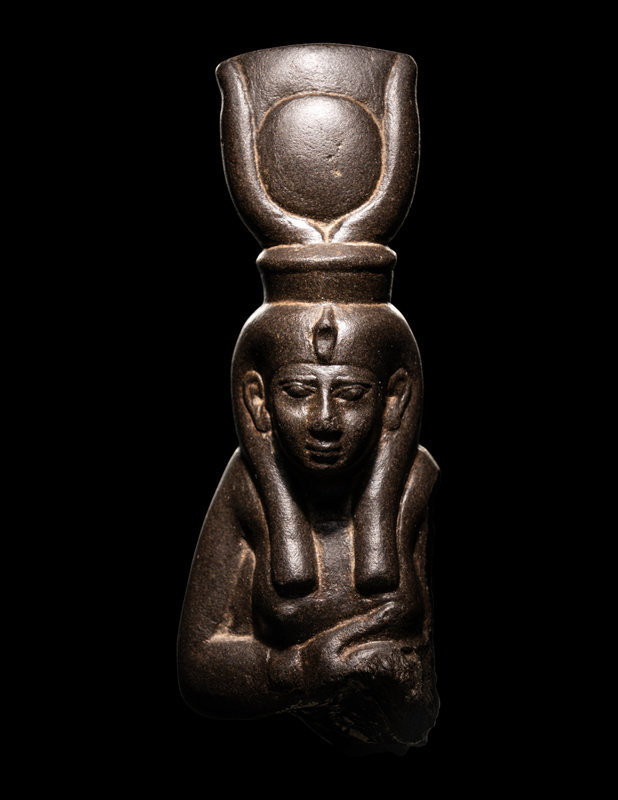 Note: The posterior pillar is elegantly engraved with a vertical hieroglyphic inscription, reading: “Speech of the great Isis, the mother of God, who gives life to (the) head of the domains and great on diadems/crowns […]." Dr. Bigler attributed the bust to a workshop in the ancient Egyptian city of Sais, located in the Western Nile Delta, based on the style and wording of the inscription. 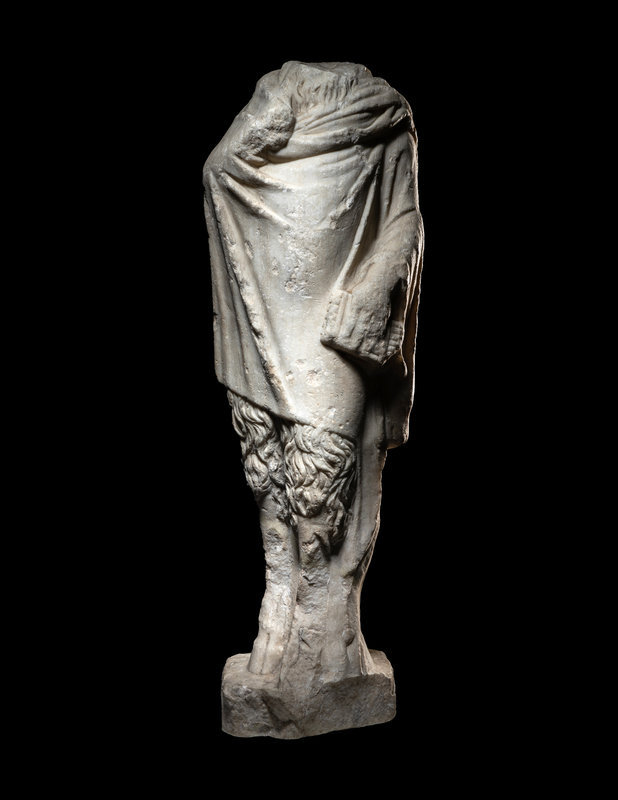 Property from a New York Collection.

Note: This figure is seen wearing a pair of trousers, a long tunic, and a leather cuirass. Pinned to his right shoulder is a cloak draped across the front of his body. This unique combination of garments is seen in depictions of high-ranking soldiers on the historical reliefs from the Trajanic and Antonine periods.

Commentaires sur Discover the natural wonders of the world & its ancient civilizations: Hindman to present a cabinet of curiosities