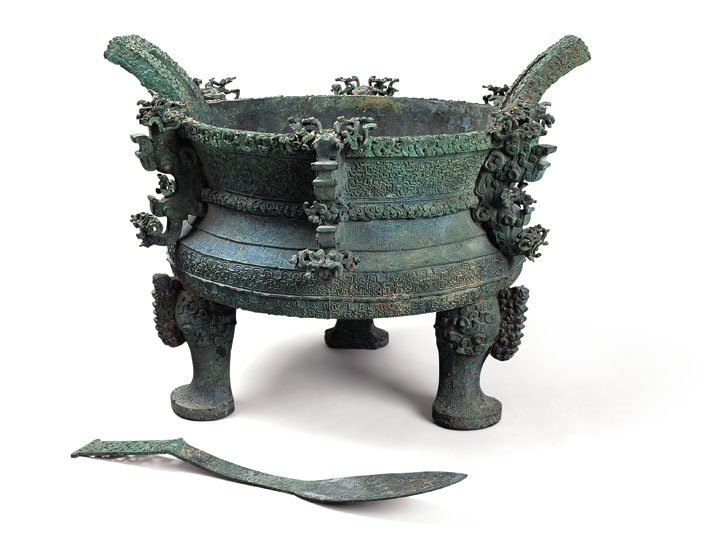 The tripod has flared, curved, standing ears and a flat base with a hoof-shaped foot. The outside of the abdomen is decorated with six three-dimensional monsters, and the mouth rim to the abdomen is decorated with coiled chi dragons and pendant scales. The upper part of the foot is decorated with the head of a beast. The inscription is cast on the inner belly: 'Only at the beginning of the first month of the first month of the year, the king chose his auspicious gold to make his own Yi (Zizi, Biao) tripod, with the use of enjoyment in filial piety to my imperial ancestor Wenkao, with prayer for Mei long Hong Gong Shuji, fear of fuzzy, respect for the alliance of sacrifice, eternal blessing. I am not afraid of the difference, benefit from the political virtue, distressed in the prestige, append the beast. Your Majesty's son, Zigeng, is the most important person in the world. This is one of the seven tripods excavated from the tomb of Wang Zigeng, son of King Zhuang of Chu and the king of Chu.

The inscription on the interior and lid of the tripod states that the owner forged the tripod in order to pay homage to his ancestors and to pray for long life; to be respectful of his oaths; to be fearless and cautious; to be virtuous and dignified; to be diligent and loving to the people; and to protect the Chu state as his foundation; and to hope that his descendants would follow this example. With its beautiful form, detailed decoration and romantic and bizarre subject matter, the tripod represents a prominent feature of Chu culture and art.