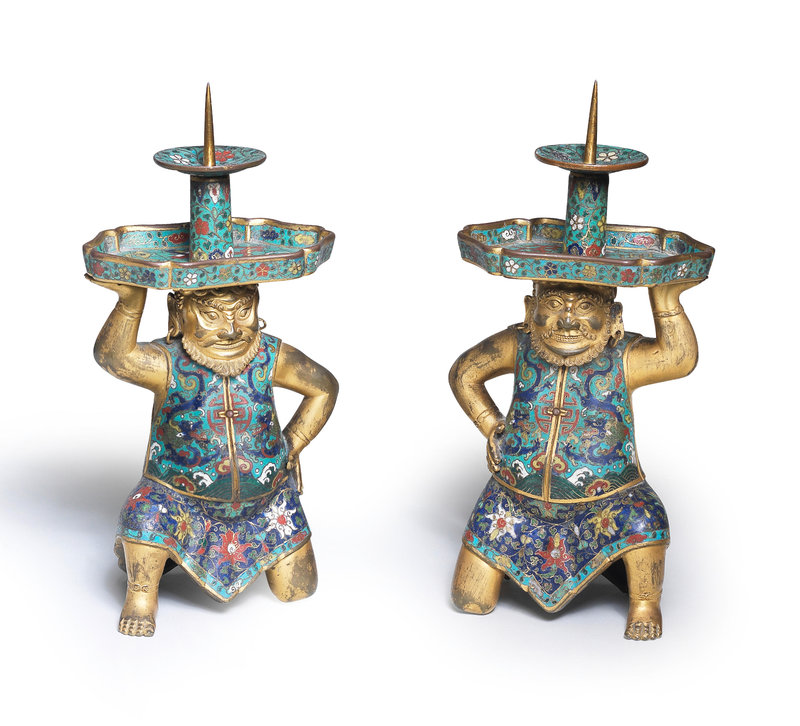 Each figure finely cast with one sturdy arm raised to support the shaped drip pan surmounted by a columnar pricket, the other hand resting on the hip, dressed in a tunic with dragons over crashing waves, the lower half with lotus scrolls, the head encircled with a fillet over bushy eyebrows and large bulging eyes, the mouths in gentle smiles between ears suspending loose earrings, each mirroring the other in a half kneel pose.

Sir Michael Oppenheimer's paternal family was the well-known South African mining family. The baronetcy was created in 1921 for Bernard Oppenheimer, Chairman of the South African Diamond Corporation for setting up diamond sorting factories to employ wounded ex-servicemen after the First World War. The family has been involved with De Beers over many decades. Lady Oppenheimer DD (1926-2022) was a distinguished moral and philosophical theologian, with a particular interest in the ethics pertaining to personal relationships.

Superbly cast and meticulously decorated with multiple coloured enamels, the present candlesticks are remarkable examples displaying the high standards achieved in the Imperial workshops during the Kangxi reign.

Figures of foreigners depicted with large rounded eyes and bushy eyebrows have been a popular subject in Chinese art dating from at least the Tang period, when the increased presence of foreigners in China prompted a new fascination and a gradual stylisation of the image of the foreigner in Chinese art. Painters of Buddhist luohan and tribute missions to the Imperial Court continued the fascination with the exotic in subsequent periods.

The combination of cracked designs interspersed with auspicious symbols, such as it can be noted on the drip pans of the present candlesticks, is unusual. The cracked ice design was especially popular on objects produced during the Kangxi reign. See for example, a cloisonné altar set, Kangxi, comprising an incense burner, a pair of candlesticks and a pair of vases, decorated with prunus blossoms on a cracked-ice ground, in the National Palace Museum, Taipei, illustrated in Enamel Ware of the Ch'ing Dynasties, Taipei, 1999, pp.97-100, pls.26-28.