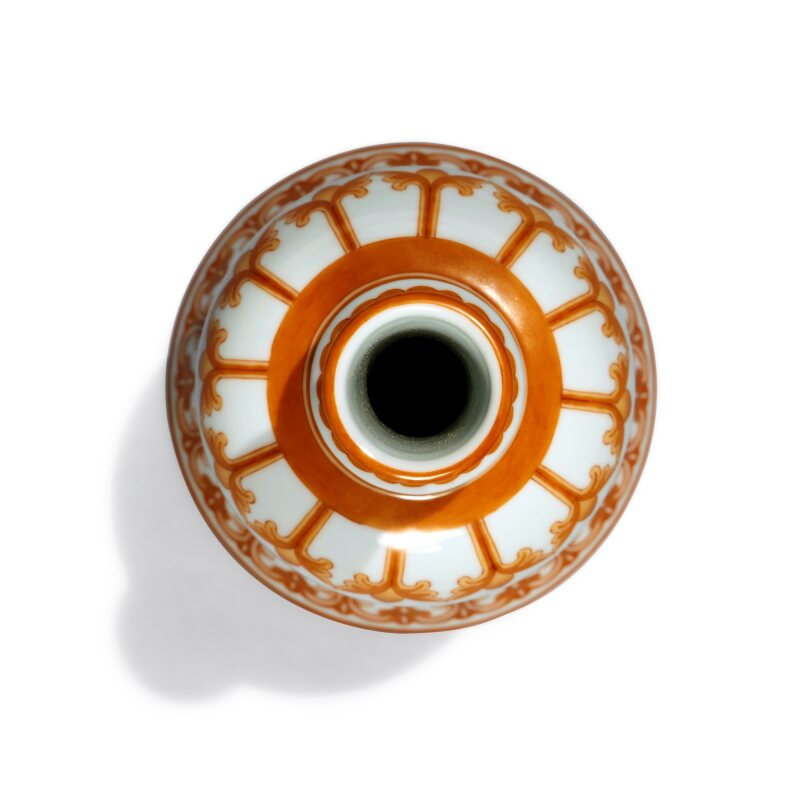 Note: A vase of this form and design can be seen in a painting by Giuseppe Castiglione, in the Palace Museum, Beijing, showing the Qianlong Emperor seated under a pine tree with a table to his right set with several treasures from his collection. The painting was included in the Palast-museum Peking Schätze aus der Verbotenen Stadt, Berlin, 1985, cat. no. 41.

These holy water vases may have been produced as offerings for the altar of a Tibetan Buddhist shrine in the Forbidden City. While imperial porcelains are usually inscribed with marks of the reigning emperors, exceptions are not uncommon, especially for items used in Buddhist ceremonies. In Feng Xianming, Annotated Collection of Historical Documents on Ancient Chinese Ceramics, Taipei, 2000, p. 241, Feng discusses a court record that documents the Qianlong Emperor decreeing marks not to be used on some holy water bottles with iron-red designs made in the 11th year of his reign (1746). For a closely related vessel from the Qing Court Collection, see one published in The Complete Collection of Treasures of the Palace Museum. Miscellaneous Enameled Porcelains Plain Tricoloured Porcelains, Shanghai, 2009, pl. 29. For another example presented to Cheltenham College, England, by Yuan Shikai in 1914, and now in the Weishaupt Collection, see G. Avitabile, From the Dragon’s Treasure, London, 1987, pl. 176. Compare also a pair of similar holy water bottles sold at Christie’s London, 11th May 2010, lot 248.