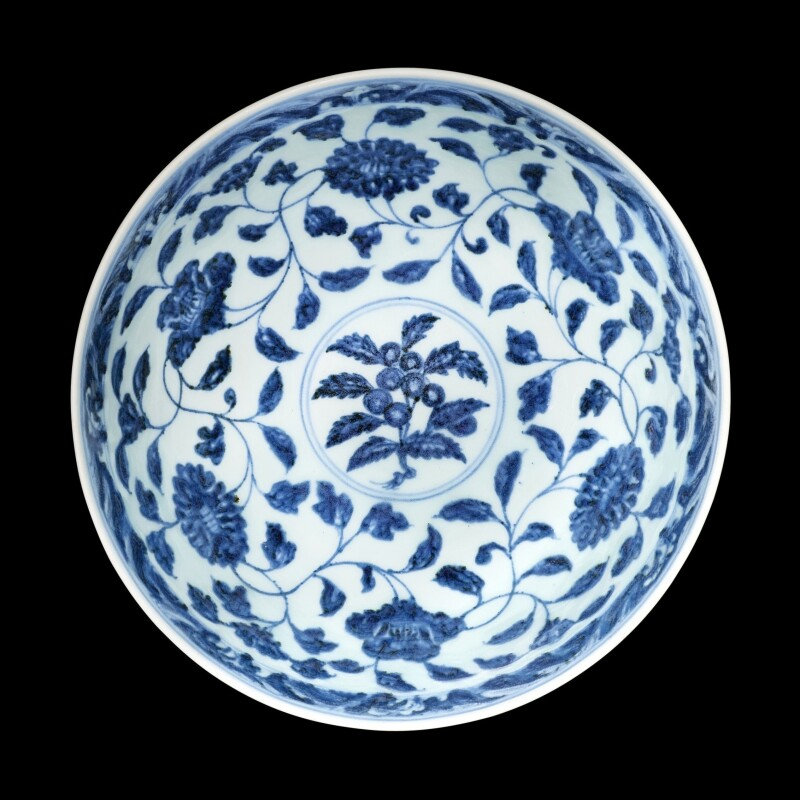 well potted with steep rounded sides resting on a short foot, painted in washes of cobalt blue to the interior with a central medallion enclosing a spray of loquat, encircled by a continuous meandering leafy stem bearing alternating blooms of chrysanthemum and camellia, all enclosed within a border of crested waves at the rim, the exterior with slender upright lappets beneath a key-fret band, the base with a six-character mark in underglaze blue within a double circle.

Note: The present Xuande bowl is comparable with a bowl in the National Palace Museum, Taipei, included in the exhibition Selected Hsuan-te Imperial Porcelains of the Ming Dynasty, Taipei, 1998, cat. no. 155. See also a bowl from the collection of Mrs Alfred Clark sold in these rooms, 30th April 1991, lot 16; and a bowl from the collection of Mr and Mrs Thomas Cole, New York, illustrated in Adrian Joseph, Ming Porcelains, Their Origins and Development, London, 1971, pl. 30, and included in the Exhibition of Chinese Blue and White Porcelain and Related Underglaze Red, Oriental Ceramic Society, Hong Kong, 1975, cat. no. 10, sold at Christie's London, 8th July 1974, lot 191, and twice in these rooms, 8th November 1982, lot 101, and 31st October 2004, lot 157.

Compare also a related lianzi bowl with a Xuande reign mark, but with two tiers of petals around the exterior and a lotus scroll on the interior with fruiting pomegranate in the centre, illustrated in Gugong bowuyuan cang Ming chu qinghua ci [Early Ming blue and white porcelain in the Palace Museum], vol. 2, Beijing, 2002, pl. 150; and a further example, sold in these rooms, 8th October 2013, lot 216 (fig. 1). Xuande bowls of this design are made after Yongle examples, see three Yongle lianzi bowls published ibid., vol. 1, pls 65-67; and another formerly in the collections of Mrs Alfred Clark and Meiyintang, included in Regina Krahl, Chinese Ceramics from the Meiyintang Collection, London, 1994-2010, vol. 2, no. 670, and sold in these rooms, 9th October 2012, lot 38 (fig. 2).