A fine and rare small blue and white globular vessel, Mark and period of Xuande (1426-1435)

A fine and rare small blue and white globular vessel, Mark and period of Xuande (1426-1435) 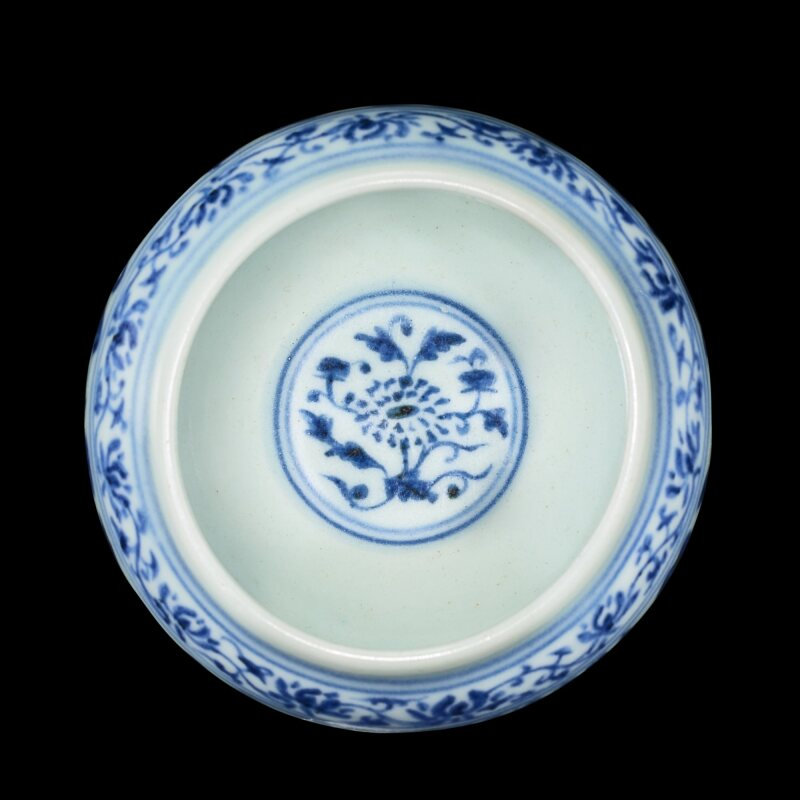 the globular body potted with generously rounded sides, superbly painted in soft tones of cobalt-blue, the exterior decorated with five large blooms borne on a slender meandering stem issuing tight buds and foliage, all above a band of upright lappets and a border of stylised scrolling stems at the foot, and below a continuous lotus scroll at the mouth, the interior with a central medallion enclosing a single spray of chrysanthemum, the six-character mark inscribed in a single horizontal line at the shoulder.

Note: Perfectly formed in its ergonomic shape and softly painted with floral scrolls, this bowl exemplifies the style and taste of early Ming imperial porcelain. Small Xuande vessels of this form are described in Archibald Brankston, Early Ming Wares of Chingtechen, Beijing, 1938, p. 25, as qing shui wan (pure water bowls), which were filled with water and used during prayers for purification. The dainty size and rounded form allow it to be held comfortably in one's palm.

A small number of similar examples can be found in important museums and private collections. See an identical bowl in the Palace Museum, Beijing, illustrated in Gugong bowuguan cang Ming chu qinghua ci [Early Ming blue and white porcelain in the Palace Museum], Beijing, 2002, vol. 2, pl. 122; and another, in the National Palace Museum, Taipei, included in the Museum's Special Exhibition of Selected Hsuan-te Imperial Porcelains of the Ming Dynasty, Taipei, 1998, cat. no. 3; and another in the Idemitsu Collection, published in Chinese Ceramics in the Idemitsu Collection, Tokyo, 1987, pl. 636. Compare also a similar bowl, but lacking the reign mark, from the collection of Sir John Addis and now in the British Museum, London, accession no. 1975,1028.10, published in Jessica Harrison-Hall, Ming Ceramics, London, 2001, p. 132, pl. 4:22, where an identical piece in the Asian Art Museum of San Francisco is mentioned.

A similar bowl with Xuande mark and period, displayed on its wooden stand, is included in an extant handscroll of the Yongzheng period, Guwantu (Pictures of Antiques), in the Victoria and Albert Museum, London, coll. no. E59-1911, dated in accordance with 1729, which depicts works of art from the Imperial collection.