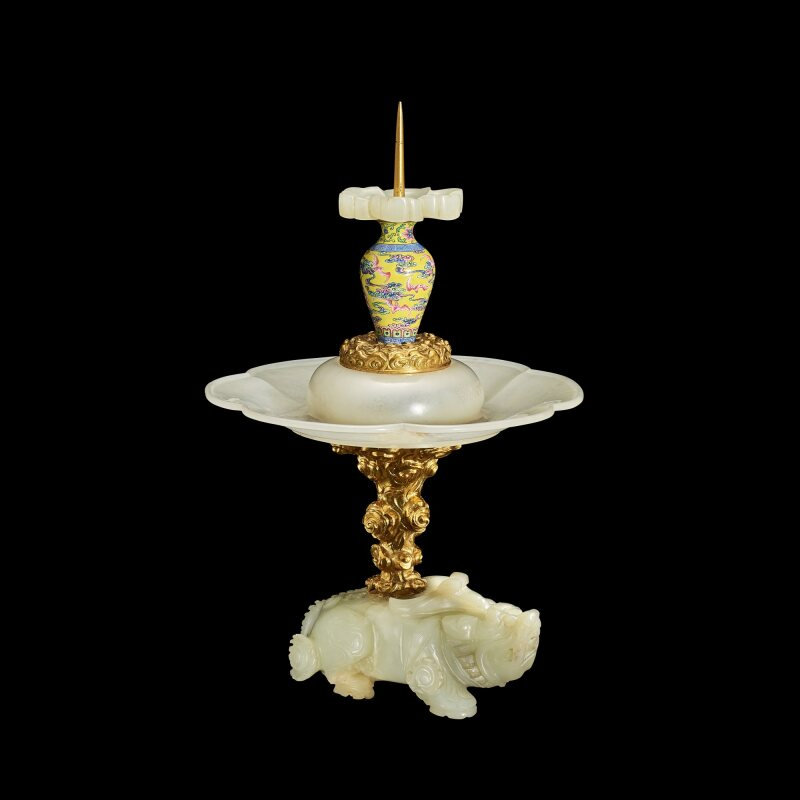 the base skilfully worked from an even white stone and rendered in the form of a ferocious mythical beast with a bifurcated tail, its back surmounted by a gilt-bronze column cast with swirling clouds and a six-petalled translucent white jade drip tray mottled with grey specks, the high domed centre supporting a gilt-bronze cap and an exquisite Beijing enamel baluster vase delicately painted with nine bats amid auspicious five-coloured clouds (wuse yun) against a yellow ground, all below a small six-petalled white jade candle tray set with a gilt-bronze pricket, incised to one side of the drip tray with a four-character seal mark and to the opposite side with yuzhu changtiao ('the jade candlestick of eternal harmony') in seal script.

Note: Comprising individual jade carvings, as well as tailor-made gilt-bronze and painted enamel elements, the present candlestick is an imperial collage conceptualised and commissioned by the Qianlong Emperor, one of the most influential art patrons in Chinese history. Documented to have been made by imperial order in 1739, it is presumably the first of its kind. This type of candlesticks formed part of the Qing imperial New Year calligraphy ritual. At midnight on the first day of a year, the emperor was supposed to light a candle on ‘the jade candlestick of eternal harmony’, drink Tusu wine from ‘the gold cup of permanent stability’, and write blessings in cinnabar and ink using ‘the million-year pen’, to express the wish for perpetual prosperity and everlasting power.

A record for the gilding workshop which dates from the 28th day in the 11th month of the 4th year (28th December 1739, fig. 1) states, ‘Eunuch Hu Shijie, as proposed by Leader of the 7th rank Samuha and Treasurer Bai Shixiu, presented a white jade carving of a mythical beast and a white jade prunus-shaped cupstand (together with a zitan wood stand), for which His Majesty ordered an enamel vase to be installed at the top in order to create a candlestick named yuzhu changdiao (‘the jade candlestick of eternal harmony’). To accompany the candlestick, the Emperor further commissioned a gold vessel jin’ou yonggu (‘the gold cup of permanent stability’) and a fitted ivory stand. A design draft had to be submitted for approval before production began.’

On the same day, a design was proposed and confirmed, indicating that the candlestick had to be made with a gilt-bronze pricket, a gilt-bronze section in the form of scrolling clouds and an enamel vase. The jade dish should be incised with a four-character reign mark and the inscription yuzhu changdiao – the name of the candlestick.

A subsequent entry, which dates from the 30th day in the 12th month of the same year (28th January 1740) states, ‘Leader of the 7th rank Samuha presented a candlestick which comprised of a white jade stand, a white jade mythical beast, a fitted enamel support, and a gilt-bronze base. It was inscribed with the characters yuzhu changdiao on the jade cupstand.’ This record also includes a gold vessel supported on ‘elephant trunk’ feet with a comprehensive listing of its embellishments.

However, finding the candlestick and the vessel less than satisfactory, on the 3rd day of the following year (31st January 1740) the Emperor demanded that their details be improved. He also ordered fitted glass and zitan wood boxes to be made. He must have been particularly discontent with the gold vessel, as he commissioned two copies to be made based on specific requirements. The dimensions had to match that of the candlestick, special attention to the dragon-shaped handles and inlays should be paid, and no production was allowed until the Emperor approved the design. Although the archive documents show no indication on the exact date when the candlestick was resubmitted, the fitted wood boxes and new pair of vessels were approved for use in the 12th month of the same year, suggesting that the enhancement of the candlestick was accepted on an earlier date.

A celadon jade candlestick from the Qing court collection in the National Palace Museum, Taipei, bears the same inscription, yet without gilt-bronze or enamel decoration. The lobed dish is raised on a floral scroll decorated shaft supported on a jade vase base with three spandrels in openwork; see Hou Yili, ‘Jin’ou yonggu yu yuzhu changdiao [The gold cup of permanent stability and the jade candlestick of eternal harmony]’, The National Palace Museum Monthly of Chinese Art, no. 375, June 2014, pp. 74-80, figs 1, 3, 4, 5 (fig. 2), together with a related candlestick with an undecorated shaft in the Palace Museum, Beijing, fig. 11, missing the openwork spandrels at the base. Hou compares the two examples in Taipei and Beijing to the archive documents and speculates that instead of enhancing the original work, new candlesticks were made in response to the Emperor’s criticism in the 5th year (p. 77). The detailed descriptions of the archive entry – from the jade beast and the prunus-shaped cupstand to the ‘scrolling cloud’ support – all point to the present work. It is very likely to be the prototype of this type of candlestick, conceptualised, commissioned and approved by the Qianlong Emperor after enhancements were made.

Jade candlesticks similar to the examples in the palace museums are included in a few court paintings such as The Qianlong Emperor Enjoying the Lunar New Year, a collaborative work painted by artists including Shen Yuan (d. 1747). Despite the discrepancies from the 4th year design, as Xu Xiaodong notes, this type of jade candlesticks must have started to be produced early in the reign, no later than the 12th year (1747); see ‘Jotting on Four jinouyonggu Cups’, Forbidden City Journal, December 2012, pp. 88-99.

For other objects required for the Qing imperial New Year calligraphy ritual, see four vessels preserved in the two palace museums and the Wallace Collection, London, illustrated in Hou, op.cit., figs 1, 2, 7, 8, 10 (fig. 2), and also in Xu, op.cit., figs 4-7, together with two related pens in the Palace Museum, Beijing, figs 11 and 12.