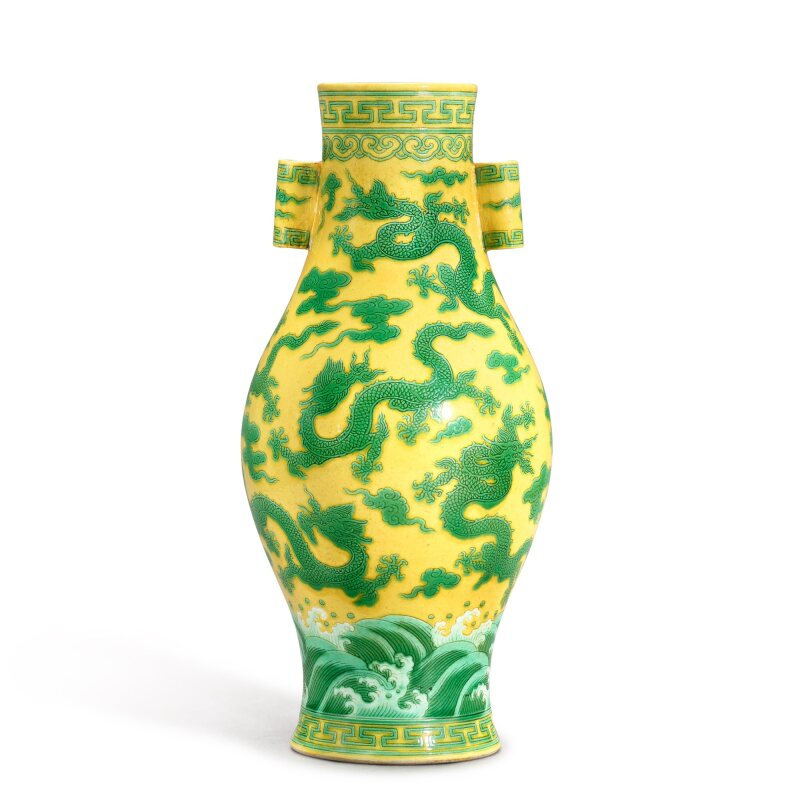 the baluster body rising from a gently splayed foot to a tall neck flanked by a pair of tubular handles, finely incised and decorated in green enamel against a yellow ground with nine scaly five-clawed dragons writhing amongst cloud scrolls, with cresting waves and a keyfret band below, the neck encircled with a ruyi band and another keyfret, the base inscribed with a six-character reign mark within a double circle.

Note: This magnificent vase with its superbly proportioned archaistic form and vivid green-and-yellow nine-dragon design is one of the characteristic inventive creations of the Yongzheng period. It is not only remarkable for its intricately incised dragon design, but also extremely unusual for the use of this striking, contrasting colour scheme. Although the combination of green and yellow enamels on Jingdezhen porcelain dates back to the Yongle period (1403-24) in the early Ming dynasty (1368-1644), this colour scheme is more commonly found on bowls and dishes but rarely on upright forms. Compare a bowl with two dragons and lacking the crashing waves, preserved in the Palace Museum, Beijing, illustrated in Gugong Bowuyuan cang: Qingdai yuyao ciqi / Qing Porcelains from the Imperial Kilns Preserved in the Palace Museum, vol. 1, part 2, Beijing, 2005, pl. 7. In China, the number nine (jiu) is the homonym for the word 'eternity' and the five-clawed dragon is the symbol of the emperor’s power, thus the motif of 'nine dragons' represents the wish for an everlasting rule.

The form of this vase is closely copying archaic bronze vessels hu, which were originally created as ritual wine containers for ancestral ceremonies, even down to the pierced slots at the foot below the handles. See, for example, bronze hu of this form from the mid-Western Zhou period (c. 1046-771 BC) illustrated in Peng Qingyun, ed., Zhongguo wenwu jinghua da cidian: Qingtong juan / Encyclopaedia of Masterpieces of Chinese Cultural Relics: Bronze volume, Shanghai, 1995, nos 0464, 0465 and 0467. Such vessels were later recreated from around the Song dynasty (960-1279). While some were used for the touhu, ‘pitch-pot’, game where players had to throw arrows into the mouth or tubular handles of the vessel, others were used as flower vases to decorate the scholar’s studio, such as a slightly shorter Longquan celadon vase from the Yuan dynasty (1279-1368), of related form but with a wider mouth and smaller handles, preserved in the Palace Museum, Beijing, illustrated in Longquan of the World. Longquan Celadon and Globalization, vol. 1: A History of Thousands of Years, Beijing, 2019, pl. 66.

While this vase appears to be unique, two related yellow-and-green vases are in the Palace Museum, Beijing, from the Qing court collection, both of somewhat different proportions, one of Yongzheng mark and period but without handles or pierced slots and decorated with a flower-and-cloud design, the other with incised Qianlong mark and of the period, with a single dragon; see Kangxi, Yongzheng, Qianlong: Qing Porcelain from the Palace Museum Collection, Hong Kong, 1989, p. 236, pl. 65 and p. 442, pl. 124. A companion to the Qianlong period vase was also sold at Christie’s New York, 17th September 2008, lot 480. A Yongzheng (1723-35) vase of similar form and size to the present piece, but painted with peonies in famille rose against a coral-red ground, is also in the Palace Museum, Beijing, illustrated in The Complete Collection of Treasures of the Palace Museum. Porcelains with Cloisonné Enamel Decoration and Famille Rose Decoration, Hong Kong, 1999, pl. 77.