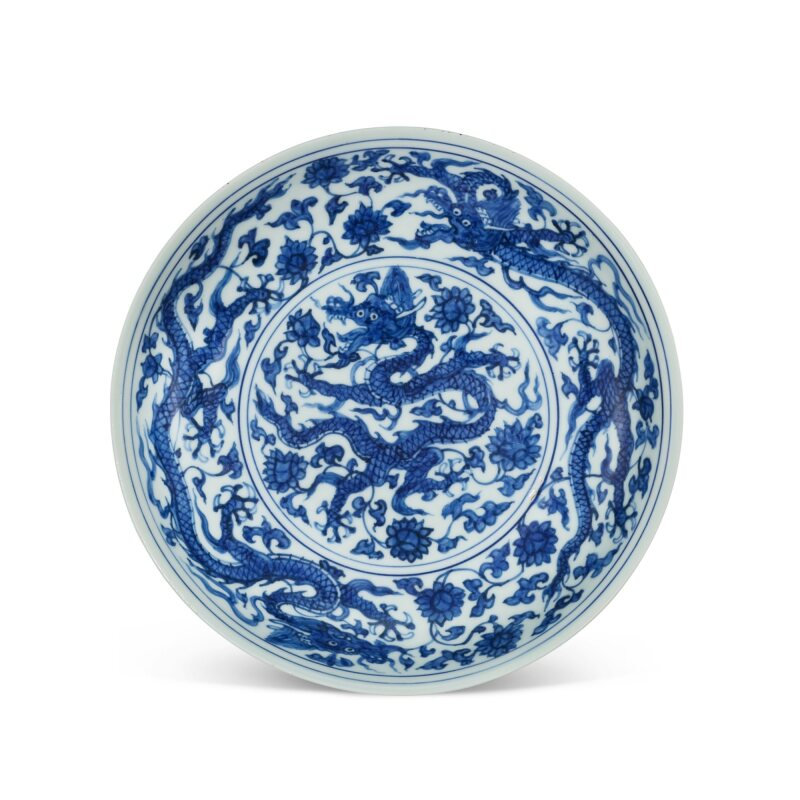 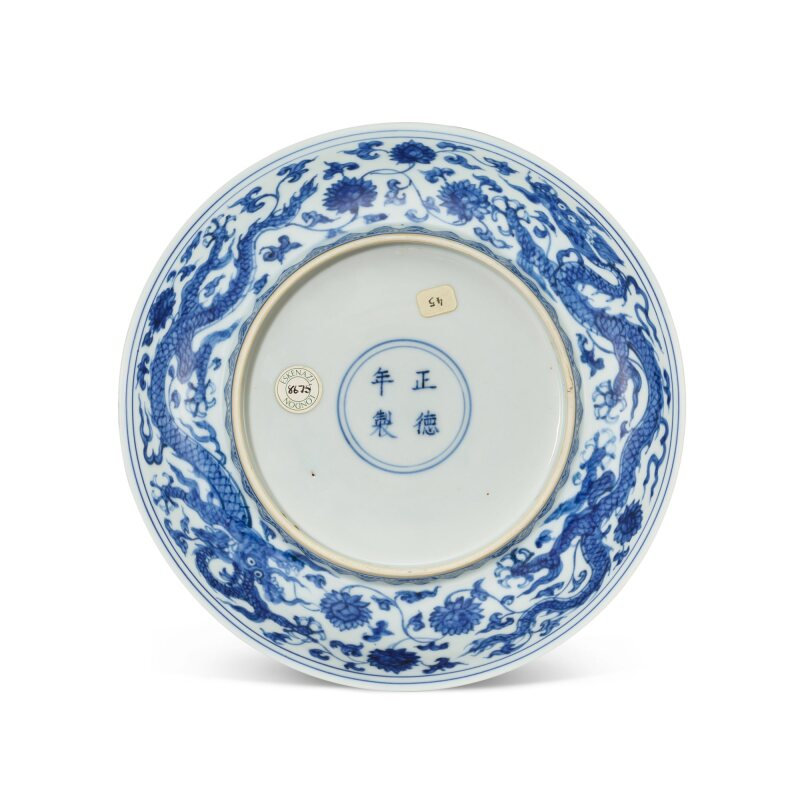 well potted with shallow rounded sides resting on a slightly tapered foot, brilliantly painted in the centre with a dragon writhing among a flowering lotus scroll, with scaly body and powerful claws, white horns and a bushy mane, the cavetto and exterior similarly decorated with two dragons pacing among lotus, one striding, the other floating in midair with outstretched limbs and its neck twisted in a ferocious posture, all between double-line borders and above a frieze of ruyi encircling the foot, the slightly domed base inscribed with a four-character reign mark within a double ring in underglaze blue, wood stand.

Note: This design of five-clawed dragons among dense lotus scrolls is perhaps the most characteristic pattern of the Zhengde period (1506-21) and appears on dishes, bowls and jars of zhadou shape. Although the dragon-and-lotus design was popular throughout the Ming period, this dense and even distribution of the decorative elements, and the soft tone of cobalt blue are peculiar to the Zhengde reign.

The design may be based on a Xuande prototype, although no exact counterpart is known. For the most closely related designs compare a dish with a similar design in the centre but two dragons facing forward among peony scrolls around the well, or one with very similar dragons among lotus scrolls, but the central dragon plunging, both illustrated in Mingdai Xuande guanyao jinghua tezhan tulu / Catalogue of the Special Exhibition of Selected Hsüan-te Imperial Porcelains of the Ming Dynasty, National Palace Museum, Taipei, 1998, cat. nos. 188 and 189; an example of the latter design was recently sold in these rooms 4th April 2012, lot 3156. Compare also a blue and white dragon dish of Chenghua mark and period (1465-87) from the Sir Percival David Collection in the British Museum, London, in Oriental Ceramics: The World’s Great Collections, Tokyo, New York, and San Francisco, 1980-82, vol. 6, col. pl. 32, which represents a much more loosely composed prototype of this design. A further example, formerly in the collection of Mrs Alfred Clark, is included in Regina Krahl, Chinese Ceramics from the Meiyintang Collection, London, 1994-2010, vol. 4, no. 1679, and was sold multiple times at auction, most recently in these rooms, 9th October 2012, lot 19, from the Meitintang collection.

On these Zhengde dishes, the placement of the surrounding dragons can vary; two similar, slightly larger dishes are in the British Museum, London, one with the dragons similarly arranged as on the present dish, the other with one dragon above and one below the central creature, both illustrated in Jessica Harrison-Hall, Ming Ceramics in the British Museum, London, 2001, pls 8:15 and 8:16. Another dish similar to the present piece in the Shanghai Museum is published in Lu Minghua, Shanghai Bowuguan zangpin yanjiu daxi / Studies of the Shanghai Museum Collections: A Series of Monographs. Mingdai guanyao ciqi [Ming imperial porcelain], Shanghai, 2007, pl. 3-78; and one from the Eumorfopoulos collection, illustrated in R.L. Hobson, The George Eumorfopoulos Collection of Chinese, Corean and Persian Pottery and Porcelain, London, 1925-8, vol. IV, pl. VII, no. D 18, was sold in our London rooms, 29th May 1940, lot 211.

A zhadou, a dish and three different bowls with this design are in the Palace Museum, Beijing; see The Complete Collection of Treasures of the Palace Museum. Blue and White Porcelain with Underglazed Red, vol. 2, Shanghai, 2000, pls 57, 63 and 69-71, one of the bowls with the Zhengde reign mark replaced by a mark in Phags-pa script. A matching zhadou also in the Meiyintang collection (Krahl, op.cit., vol. 2, no. 686), was sold in these rooms, 7th April 2011, lot 60.