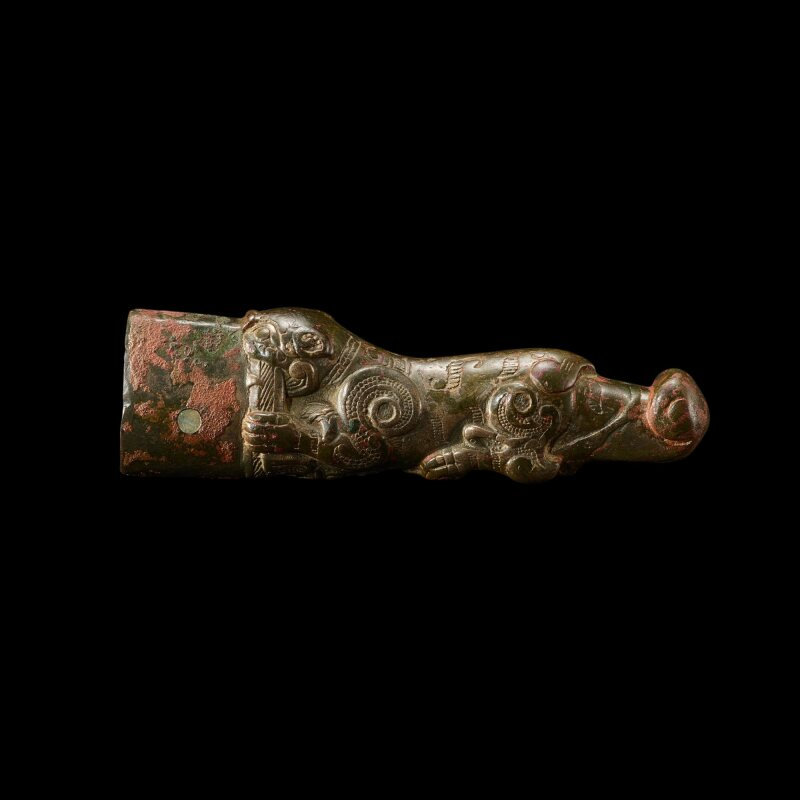 modelled as a ferocious feline with open jaws, together with its front legs tightly grasping the robe-twist border, the muscular haunches terminating in sharp-clawed paws, the thick tail slightly coiling at the end, the body decorated overall with well-defined stripes enhanced by C-scrolls, the underside further adorned with an animal bovine mask beneath its front legs and a small deer between the hind paws.

Note: The present piece, similar to other ferrules of the period, were made to cap the foot of ceremonial poles or weapons, such as spears; it not only protects the shaft but also highlights the superiority of its owner. These ferrules appear to have been conceived individually, showcasing the borderless creativity of the Zhou dynasty artisans.

A closely related ferrule of the same design is published in Hayashi Minao, In shu jidai seidoki no kenkyu [Conspectus of Yin and Zhou bronzes], vol. 3, 1989, p. 326, top right. See also a bronze ferrule modelled as a crouching tiger in the British Museum, London, accession no. 1932,1014.13; and a silver-inlaid bronze example, included in Jessica Rawson and Emma C. Bunker, Ancient Chinese and Ordos Bronzes, Hong Kong Museum of Art, Hong Kong, 1990, cat. no. 88.