the body of rectangular form with four graduated square in-curved legs, the body applied with two animal mask handles, painted with twelve lively five-claw dragons amongst clouds and flames, the stepped cover with bands of ruyi scrolls and trigrams, below a pierced dragon finial. the straight-sided octagonal body rising from a tall spreading knopped stem to a short flaring neck and everted rim, applied and painted in rich cobalt-blue tones to the shoulder with four cherub heads above a leafy pendent garland, divided by four images related to the Denial of St. Peter, all above lotus-lappet, floret and lotus scroll bands, the neck with a floral band.

Note: Jars of this form take their shape from European metal prototypes. The mixture of the Western decorative cherub-head motif with Chinese-style flower sprays reveal the Ming potters' ability to adopt foreign designs to their repertoire to meet the stylistic requirements of international markets. A closely related example was included in the exhibition Caminhos da Porcelana. Dinastias Ming e Qing, Fundacao, Lisbon, 1998, cat. no. 14; another was sold in these rooms, 30th June 1964, lot 45; and a third example was sold at Christie's London, 4th June 1973, lot 116.

The Christian motifs on the present piece suggest that this jar was made for the Portuguese Jesuits (see ibid., p. 376). the rounded sides rising from a short straight foot to a straight rim, painted with intertwined branches of pine, prunus and bamboo in two tones of blue, between a band of key-fret at the rim and a band of lappets at the foot, the base with apocryphal Xuande mark. the ovoid body rising from a recessed base to a short waisted neck, painted around the exterior in rich cobalt-blue tones with ducks swimming amongst lotus, all below a ruyi collar and floral sprigs at the neck.

Note: Compare a slightly larger jar of this form and painted decoration, in the Idemitsu Museum of Art, illustrated in The Idemitsu Museum of Art 15th Anniversary Catalogue, Tokyo, 1981, cat. no. 845; another closely related example sold in these rooms, 15th December 1987, lot 152; and a third jar sold at Christie's London, 21st March 1988, lot 32.

The form of this jar can also be found decorated in polychrome enamels; for example see a Wanli jar painted with the 'Hundred Deer' motif, in the Tokyo National Museum, illustrated in Oriental Ceramics. The World's Great Collections, vol. 7, Tokyo, 1981, col. pl. 26; and another wucai jar decorated with dense stylized clouds published in Sekai toji zenshu, vol. 14, Tokyo, 1976, fig. 219. the rounded sides, rising to a slightly flared rim, the interior painted with Wang Xizhia with a goose and attendant in a fenced garden, with a lingzhi fungus painted to the counter-sunk base. 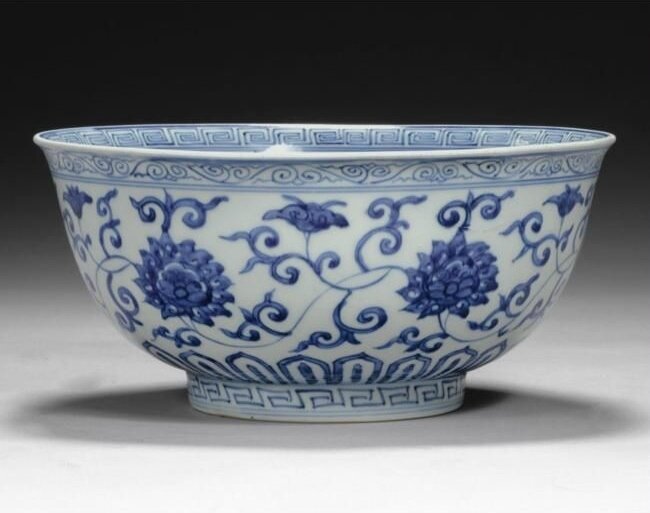 the deep curved sides rising from a short straight foot to an everted rim, painted to the interior in rich cobalt-blue tones with a lotus medallion encircled by a leafy undulating lotus scroll and key-fret band at the rim, the exterior similarly decorated with a classic scroll band at the rim. 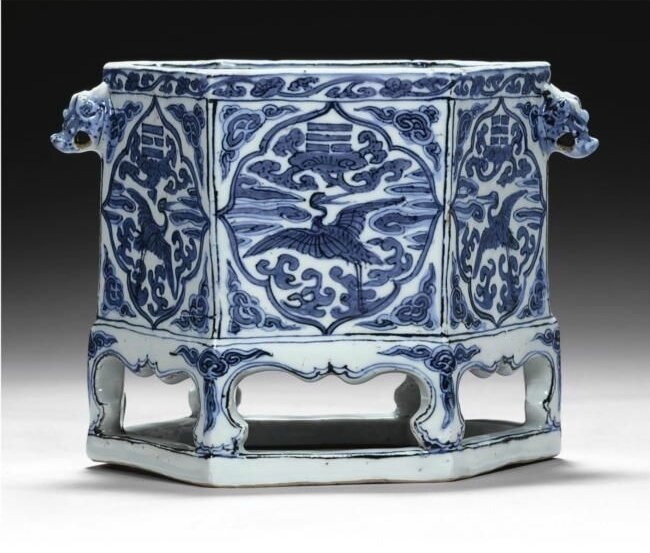 of hexagonal form, with dragon head handles on a raised openwork stand, each facet painted with a crane amongst clouds below a trigram and lingzhi, within an octofoil panel, below a band of lingzhi.

Note: For a similar example see Laurence C.S. Tam, Anthology of Chinese Ceramics, Hong Kong, 1980, pl. 87; and a related vessel included in the exhibition, Ming Blue and White: Jiajing to Chongzhen Including Dated Examples, London, 2004, no. 23. of deep rounded form with steep sides rising from a narrow circular base, the interior painted in underglaze blue with a band of interlinked lappets and trefoils surrounding a narrow band of foliate motifs within double line borders and a central medallion of similar lappets, with a band of diaper below the rim, the exterior painted with a wide band of upright lotus petals between bands of key-fret below the rim and at the foot.

Note: A bowl of this elegant shape and design, in the National Palace Museum, Taipei, was included in the Special Exhibition of Selected Hsuan-te Imperial Porcelains of the Ming Dynasty, National Palace Museum, Taipei, 1998, cat. no. 157, together with a smaller example, cat. no. 160. Compare also a Xuande bowl of this size and design, in the Beijing Arts and Crafts Museum, Beijing, illustrated in Zhongguo taoci quanji, vol. 12, Shanghai, 2000, pl. 66. For three closely related bowls, see one formerly in the R.H.R. Palmer Collection, sold at Christie's Hong Kong, 17th January 1989, lot 571, and again in these rooms, 9th June 2004, lot 27, from the Toguri Collection; another, from the George Eumorfopoulos Collection, sold in these rooms, 29th May 1940, lot 222; and a third example, from the Norton Collection, also sold in these rooms, 26th March 1963, lot 51. 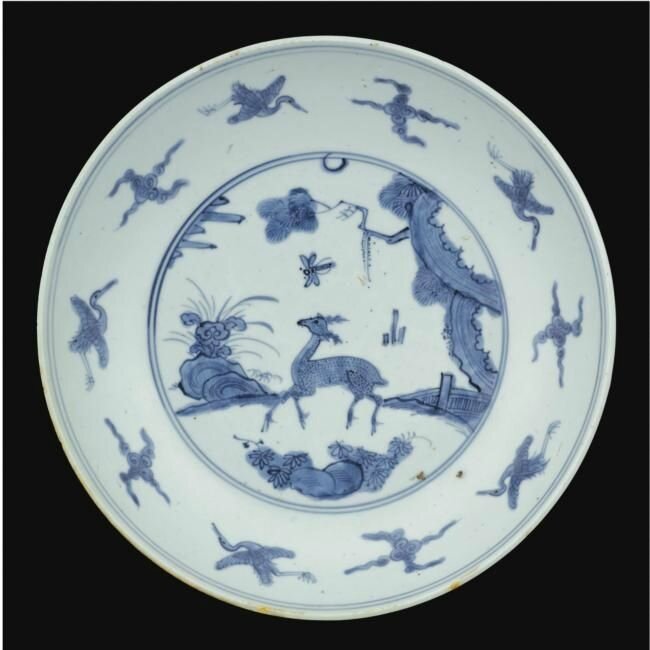 the deep rounded sides rising from a short tapering wedge-shaped foot, freely painted to the interior with a medallion enclosing a deer in a landscape, encircled in the well by cranes in flight divided by ruyi-head cloud scrolls, the exterior with six ruyi medallions.