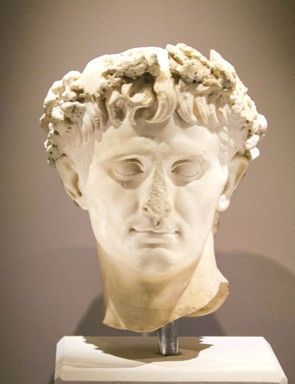 King Herod, the biblical Roman-Jewish king who ruled Jerusalem from 37 to 4 BC. AFP PHOTO / JACK GUEZ.

JERUSALEM.- The Israel Museum, Jerusalem, premieres the world’s first exhibition on the life and legacy of Herod the Great, one of the most influential – and controversial – figures in ancient Roman and Jewish history. On view from February 13, 2013, through October 5, 2013, the landmark exhibition Herod the Great: The King's Final Journey presents approximately 250 archaeological finds from the king’s recently discovered tomb at Herodium, as well as from Jericho and other related sites, to shed new light on the political, architectural, and aesthetic impact of Herod’s reign from 37 to 4 BCE. Among the objects on view —all of which have undergone extensive restoration at the Israel Museum for exhibition display purposes —will be three sarcophagi from Herod’s tomb and restored frescoes from Herodium, his private bath from the palace at Cypros; never-before-seen carved stone elements from the Temple Mount; and an imperial marble basin thought to be a gift from Augustus.

Lionized as the “the greatest builder of human history,” King Herod was also demonized for his uncertain ethnic and religious pedigree, controversial political alliances, the execution of his wife and three of his children, and erroneous association with the New Testament narrative of the “Massacre of the Innocents” in Bethlehem. Herod the Great: The King's Final Journey seeks to provide a better understanding of this ancient figure through the monumental architecture he created and the art and objects with which he surrounded himself. The exhibition will examine Herod’s remarkable building projects, complex diplomatic relations with the Roman emperors and nobility, and dramatic funeral procession from Jericho to the mausoleum he constructed for himself in Herodium. A striking reconstruction of the burial chamber of the mausoleum is a centerpiece of the exhibition.

In 2007, after a 40-year search, renowned archaeologist Professor Ehud Netzer of the Hebrew University of Jerusalem discovered the ruler’s tomb at Herodium on the edge of the Judean Desert. The site included a fortress palace and a leisure complex with gardens, large pools, decorated bathhouses, and a theatre with a royal box. In his final years, Herod reconfigured the architecture of the complex to prepare the setting for his burial procession and site, and constructed a magnificent mausoleum facing Jerusalem. The Museum’s exhibition is dedicated to the memory of Professor Netzer, who died in 2010 at the site of his seminal discovery.

“Professor Ehud Netzer capped his decades-long excavation of Herodium with his discovery of King Herod’s tomb in 2007, and over the past five years, archaeologists excavating the site have made remarkable discoveries that have deepened our appreciation of Professor Netzer’s remarkable achievement and enriched our understanding of Herod, his reign, and his role in the history of the region,” said James S. Snyder, Anne and Jerome Fisher Director. “We are proud of the extensive restoration work that our conservation staff has been able to complete and thrilled to present these important finds to the public for the first time in an exhibition that will illuminate a pivotal period in the history of the Land of Israel.”

Herod the Great: The King's Final Journey will be organized around the route of Herod's carefully planned funeral procession, from the throne room at his winter palace in Jericho, through Jerusalem, to his monumental tomb at Herodium. Central themes of the exhibition include Herod’s impact on the architectural landscape of the Land of Israel; his complex relationships within the Roman Empire; and his death and burial:

King Herod is known for his large-scale building projects, which required enormous resources and transformed the landscape of the Land of Israel. In addition to his most renowned achievement—the renovation and re-construction of the Temple in Jerusalem—Herod also built elaborate palaces, fortresses, public buildings, pagan temples, and cities which reflect the integration of local building traditions and materials with Roman technology and style. Herod’s extensive building activities will be illustrated in the exhibition through architectural elements and archaeological fragments from several Herodian sites, including Jerusalem, Jericho, Cypros, and Herodium.

Herod’s rise to power was tightly bound with the rise of the Roman Empire, whose culture he greatly admired. Initially a friend and supporter of Marcus Antonius, Herod famously switched allegiances, following the former's defeat, and courted the favor of the first Roman emperor Augustus. Herod expressed his devotion by dedicating temples and cities in honor of Augustus and also paid tribute to other notable Roman personages, like Agrippa, in the form of monetary, military, and political support. Herod’s special affiliation with Rome will be presented through portraits of Augustus, Livia and Marcus Agrippa, and through Augustan luxury objects, brought to the region from Rome, as well as Herodian finds imported or crafted by Roman artists.

•The Final Journey from Jericho to Herodium

The funeral of King Herod in 4 BCE began at his lavish winter palace in Jericho and ended at his fortress and palace at Herodium, where he was buried in a mausoleum especially constructed for him facing Jerusalem. The King’s final journey will be presented through reconstructions of special architectural elements from Jericho and Herodium, including the decorated throne room of the Jericho palace where Herod’s body lay in state and the burial chamber from his mausoleum.

Herod the Great: The King's Final Journey is organized by the Israel Museum and curated by David Mevorah, Curator of Hellenistic, Roman, and Byzantine Periods, and Dr. Silvia Rozenberg, Rodney E. Soher Senior Curator of Classical Archeology. The exhibition will be accompanied by a comprehensive 250-page catalogue, published by the Israel Museum, featuring the first publication of the tomb complex and other discoveries from Herodium. The catalogue will also include scholarly articles on Herod’s life and the legacy of Herodian architecture, written by Professor Netzer before his death in 2010, and by other leading experts in the field. A visitor wonders past a display at the first exhibition on King Herod, the biblical Roman-Jewish king who ruled Jerusalem from 37 to 4 BC, in The Israel Museum on February 13, 2013 in Jerusalem. The Israel Museum, premieres the world’s first exhibition on the life and legacy of Herod the Great, one of the most influential and controversial figures in ancient Roman and Jewish history. AFP PHOTO / JACK GUEZ. 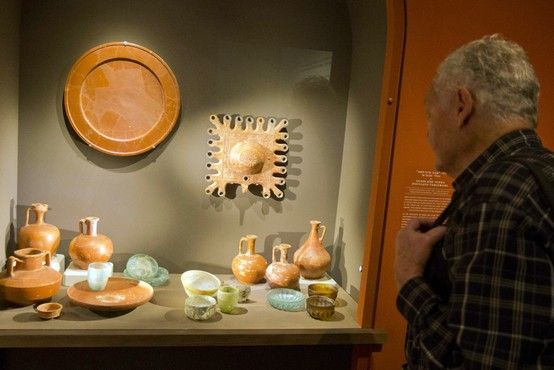 A visitor views artifacts on display during the first exhibition on King Herod, the biblical Roman-Jewish king who ruled Jerusalem from 37 to 4 BC, in The Israel Museum on February 13, 2013 in Jerusalem. The Israel Museum, premieres the world’s first exhibition on the life and legacy of Herod the Great, one of the most influential and controversial figures in ancient Roman and Jewish history. AFP PHOTO / JACK GUEZ.