MADRID.- A monkey caresses its young while a donkey plays the harp. In the distance, a lion roars. Animals, real or represented, wild or domesticated, played a vital role in Ancient Egypt and were ubiquitous in everyday life. The ancient Egyptians appropriated animals in order to use their symbolic images in different ways. In this way, animal figures became a multiple element in a language that was codified, written or represented and, in this sense, stood as a pillar of Egyptian religious thought. Animals also provided an endless source of inspiration, originating artistic production of exceptional wealth and variety. The exhibition Animals and Pharaohs: The Animal Kingdom in Ancient Egypt features a selection of 430 objects that illustrate this intense relationship through sphinxes and statues —some of them enormous in size— and steles, vases and jars, watercolours and murals, coffers and amulets, sarcophagi and mummies. In fact, the show includes 14 specimens of animal mummies that were specifically studied for exhibition, just as 260 objects were restored for the same purpose. Animals and Pharaohs is the result of an agreement between”la Caixa” Foundation and the Louvre Museum for the joint organisation of such exceptional projects as this show. Without doubt, the art of Ancient Egypt has occupied an important place amongst the exhibitions organised by the Foundation over the last thirty years. In 1986, Nofret the Beautiful. Women in Ancient Egypt, featuring pieces from the Cairo Museum, generated unprecedented expectation in Madrid and Barcelona, due both to its subject and the beauty of the works displayed. Since then, ”la Caixa” Foundation has launched other projects aimed at exploring other aspects of this ancient civilisation: the relationship with Black Africa in Nubia. Kingdoms of the Nile in Sudan; cultural diversity in Another Egypt. Coptic Collections from the Louvre Museum; and the most recent, Egyptian Mummies. The Secret of Eternal Life, based on the collections of the Rijksmuseum Van Oudheden in Leiden.

Animals and Pharaohs: The Animal Kingdom in Ancient Egypt now joins this long list of exhibitions organised by ”la Caixa” Foundation in recent years. On this occasion, the show enables us to discover this fascinating civilisation from a different perspective: its fauna. Pharaonic Egypt conferred an ubiquity to animals that is not found in any other ancient culture. No other people has observed, described, included and appropriated the fauna of their country like this civilisation. Accordingly, the prism of zoology affords us a glimpse into the heart of Ancient Egypt, its most everyday aspect. Animals and Pharaohs, a new collaboration with the Louvre Museum
The cooperation between ”la Caixa” Foundation and the Louvre Museum is fruit of the mission that both organisations pursue to promote knowledge by organising exhibitions of an archaeological nature —which enable us to discover other civilisations— as well as shows on ancient and modern art.

This ambitious agreement forms part a line of action launched by ”la Caixa” Foundation in recent years to establish strategic alliances with leading cultural institutions around the world with a view to intensifying its cultural activities and generating synergies amongst different international centres of the highest standing. This historic understanding was intensified by the signing of cooperation agreements covering two consecutive periods (2008-2012 and 2012-2016) for the joint organisation of exhibitions at ”la Caixa” Foundation cultural centres including the loan of works from the Louvre collections and curatorial services by specialists from the Parisian museum.

Thanks to this agreement, the various CaixaForum centres have hosted such diverse, quality shows as Roads of Arabia. Archaeological Treasures from the Kingdom of Saudi Arabia; Etruscan Princes. Between East and West; Another Egypt. Coptic Collections from the Louvre Museum; Delacroix (1798-1863); and Before the Flood. Mesopotamia (3500 – 2000 BC).

The exhibition now presented at CaixaForum Madrid is the first in the latest series of joint shows scheduled, and is the first to open in both countries. Animals and Pharaohs was open to the public at the Louvre-Lens Museum from December last year until this March. The bestiary, omnipresent in the Egypt of the Pharaohs
“[The temples of the Egyptians], with their porticos and vestibules are carefully constructed… the halls are surrounded with many pillars… the temples gleam with gold, and silver, and amber, and glitter with particoloured gems from India and Ethiopia; and the shrines are veiled with gold-embroidered hangings.

“But if you enter the penetralia of the enclosure and… seek the image that is the inhabitant of the temple… What do you see? A cat, or a crocodile, or a serpent of the country or some such dirty beast... The god of the Egyptians appears. It is a beast wallowing on a purple couch!” -Clement of Alexandria (c. 150-215), The Paedagogus, Book III, Chapter II, cited by Champollion, 1823. It is not necessary to be an Egyptologist to appreciate the abundance of animal figures, in numerous forms and contexts, in Egyptian art. This profusion, along with the displays of worship of sacred animals that occurred in the later periods of Pharaonic Egypt, led some classical philosophers and historians to regard the ancient Egyptians as mere animal worshippers. Clement of Alexandria, amongst others, even ridicules and mocks this perceived trait with eloquent condescension.

This reputation for zoolatry remained deeply rooted in Western thought up to modern times, when scientific Egyptology shed new light on what is a much more complex religious practice than was previously believed, providing a more accurate interpretation of the relationship between the Ancient Egyptians and the animal world. The Egyptians did not worship animals: rather, they meticulously chose animal forms in order to convert them, by comparison or assimilation, into manifestations of the divine essence in a way that was accessible to humans. There is a religious, symbolic or political discourse in this representation of animals, based on thorough, tireless observation of nature.

In a civilisation in which animals, both wild and domesticated, were omnipresent, the Egyptians appropriated these animals in order to create, in different ways, the symbolic images that they embody. In this sense, the animal figure is a pillar of Egyptian religious thought, as well as an endless source of inspiration that resulted in artistic production of exceptional wealth and variety. 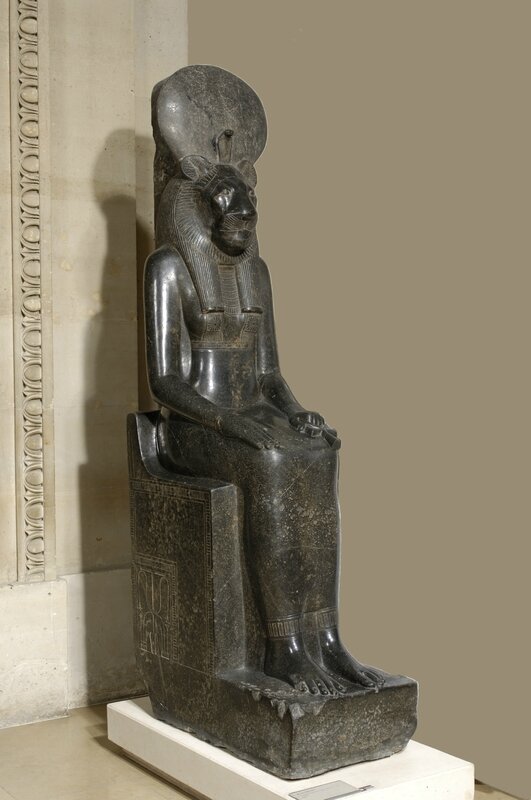 430 works, including a statuary group weighing more than five tonnes
In its nine sections, the exhibition Animals and Pharaohs. The Animal Kingdom in Ancient Egypt explores the extraordinary bonds that joined people and nature, the Egyptians and animals. At once companions, means of transport and representations of gods, animals provided a heterogeneous source of inspiration. Animal images appear constantly, both in everyday life and in funeral, religious and civil rites.

The exhibition features a total of 430 works, the immense majority of which come from the Louvre Museum. The list is completed by pieces loaned by other institutions, such as the Bibliothèque centrale des Musées Nationaux (Paris), the National Natural Science Museum-CSIC (Madrid), the Natural Science Museum of Barcelona, the Montserrat Museum and the Egyptian Museum of Barcelona.

Visitors will find sculptures, statues and figures, steles and reliefs, pottery, papyrus products, watercolour and mural paintings, coffers, amulets and jewellery, as well as a huge and diverse range of everyday objects. 260 works restored and 14 mummies studied for the occasion
Also particularly outstanding is the group formed by 14 mummies of different animals (cats, dogs, sheep, ibis, falcon, fish, crocodiles and snakes), coffins and sarcophagi. Using the latest technology and taking advantage of the organisation of this exhibition, computed tomography scans were made of the mummies in order to gather as much information as possible from the images obtained.

In this way, it was observed that there are whole animals inside most of the mummies, although in some cases –such as certain of the ibis mummies– they contain only a few feathers or bones. The study also served to ascertain the principles of animal mummification, distinguishing three different techniques used. Besides the study of these mummies, the agreement between the Louvre Museum and ”la Caixa” Foundation to organise this exhibition also enabled 260 pieces to be restored, involving different tasks, from cleaning to interventions aimed at restoring the works to legibility and stability.

As is habitual in exhibitions organised by ”la Caixa” Foundation, moreover, the project also includes a full programme of activities and the publication of a catalogue detailing the principal scientific contributions and articles on each of the aspects covered by the show.