A fine large blue and white hu-form vase, Qianlong six-character sealmark and of the period (1736-1795)

A fine large blue and white hu-form vase, Qianlong six-character sealmark and of the period (1736-1795) 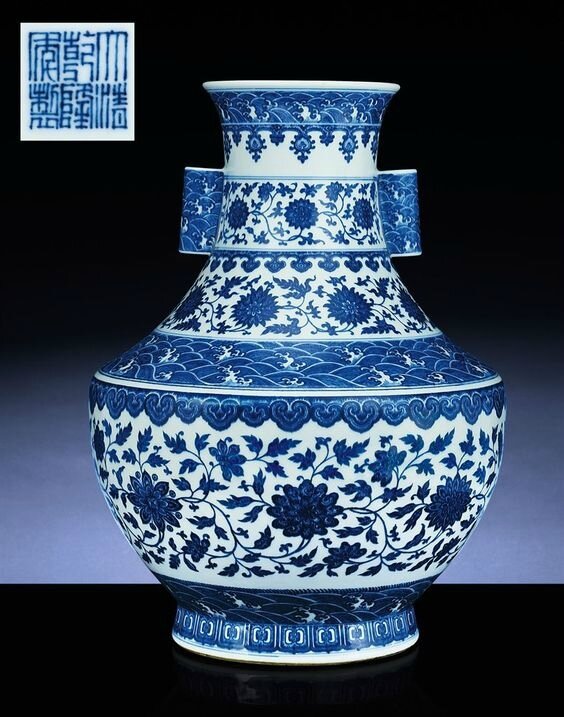 Well painted in Ming style with 'heaped and piled' effect, around the lower body with a broad band of foliate scroll bearing eight large blossoms, between waves around the base and a ruyi collar at the angled shoulders, the upper body with similar bands of waves, floral bands and pendant trefoils, the wave pattern repeated on the tubular handles and mouth rim.

Note: Sir Ralph Endersby Harwood (1883-1952), served as Deputy Treasurer to His Majesty, King George V from 1922 until the King's death in 1936. Sir Ralph continued as Deputy Treasurer to King Edward VIII and briefly served King George VI. He was also Controller of the Royal Household. This vase is believed to have been presented to Sir Ralph by Queen Mary and to have come from the Royal Collections at Windsor Castle.

An identical vase was included in the exhibition, The Wonders of the Potter's Palette, Hong Kong Museum of Art, 1984, illustrated in the Catalogue, no. 63. Another hu-shaped vase of this design but potted with an upright rather than flared mouth rim, is illustrated in Blue and White Ware of the Ch'ing Dynasty, Book 1, National Palace Museum, Taipei, 1968, pl. 3. See also the very similar vase sold at Christie's Hong Kong, 30 May 2005, lot 1480.