PASADENA, CA.- The Norton Simon Museum presents an installation of Rembrandt’s striking Self-Portrait from 1640, on loan from The National Gallery, London this winter season. Titled Self Portrait at the Age of 34, the painting captures the image of the artist in his middle age: affluent, self-confident and wise. Its installation at the Norton Simon Museum marks the first time the painting has been on view in the U.S. and is part of a loan exchange program between the Norton Simon Museum and the National Gallery that began earlier this year, with the London installation of the Museum’s The Repentant Magdalene, after 1660, by Guido Cagnacci. Self Portrait at the Age of 34 has been installed in the Museum’s 17th-century art galleries, alongside the Simon’s own collection of Rembrandt paintings: Portrait of a Bearded Man in a Wide-Brimmed Hat from 1633, Portrait of a Boy, ca. 1655–60, and the artist’s Self-Portrait, ca. 1636–38, executed only a few years earlier than the National Gallery’s. The painting is on view from Dec. 8, 2017, through March 5, 2018.

‘Self Portrait at the Age of 34’
The age-old tradition of self-portraiture was enthusiastically embraced by Rembrandt van Rijn (Dutch, 1606–1669). Indeed, he was his own favorite model. Astonishingly, he recorded his own image roughly 100 times altogether in his paintings, prints and drawings, posing himself for formal portraits, but also capturing himself grimacing or smiling and even depicting himself as a saint. His youthful self-portraits of the 1620s divulge some mild self-examination, as well as a budding self-awareness as an artist; those produced during the 1630s reveal both a jaunty flamboyance and later a self-confident-but-world-wise painter who becomes more soulful as the decade progresses; and those produced in the last two decades of his life treat age with raw honesty and deep introspection.

Rembrandt’s Self Portrait at the Age of 34 captures the ambitious artist at the height of his talents and fame, but also as a man who has endured the highs and lows of life. By 1639, he was living in the luxurious comfort of his new home in the Breestraat in Amsterdam, and was commanding the attention of aristocratic patrons. He had also felt the loss of several family members, including three infant children in the span of five years. He would lose his wife, Saskia, only two years later. In the London painting, Rembrandt’s self-assurance is reinforced by his steady gaze and comfortable pose, with his right arm leaning on the parapet, declaring his possession of not only that ledge, but his rightful place as one of the most sought-after artists of the moment. The pose would be imitated by many of his Dutch students and colleagues, perhaps unaware of the various precedents that had inspired Rembrandt himself.

Rembrandt’s Inspiration
The presence of Raphael’s stunning 1515 Portrait of Baldassare Castiglione (now at the Louvre) in the April 1639 sale of property owned by the wealthy Flemish merchant Lucas van Uffelen was certainly not the first instance of a work by an Italian master in the Netherlands. Rembrandt himself came to own artworks attributed to Jacopo Bassano, Annibale Carracci, Giorgione, Michelangelo, Palma Vecchio and Raphael. But the Van Uffelen sale is notable as being one of the most well-attended auctions in the first half of the 17th century, drawing locals and foreigners alike to bid exceptionally high prices for the high-quality contents of the auction. We assume that it was on this occasion that Rembrandt made his now-famous sketch of Raphael’s Portrait of Baldassare Castiglione that was on the auction block, annotating his drawing with not only the record price at which the painting was eventually sold (3,500 guilders), but also the enormous sum for the total proceeds of the estate sale (59,456 guilders). By this date, the highest figure paid to Rembrandt for one of his single-figure pictures was about 600 guilders, so witnessing the sale of a 125-year-old painting by one of the most treasured Italian Renaissance artists must have made an impression on the already-successful 33-year-old. His attention to this sale, and the Raphael portrait in it, is one of several instances that show that he was looking back to classical roots and seeking out the successful formulas of his predecessors. As a native of Holland who never travelled outside his homeland, Rembrandt had nonetheless found a connection with Italian art from the previous century. His simple, quick sketch of Raphael’s Portrait of Baldassare Castiglione (now at the Albertina in Vienna) is an important key to understanding the genesis of Rembrandt’s Self Portrait at the Age of 34, signed and dated 1640. By this time, the artist had gained tremendous fame and had already received the commission to paint the colossal scene of the Night Watch (for which he would be paid 1,600 guilders). His lively sketch of the Castiglione portrait would lead to the creation of an etching in the same year, and ultimately a painting in the next, but rather than repeat the image of Castiglione, the figure morphs into Rembrandt’s own visage — he depicted himself as a distinguished and flourishing artist at the peak of his career, dressed in 16th-century garb. 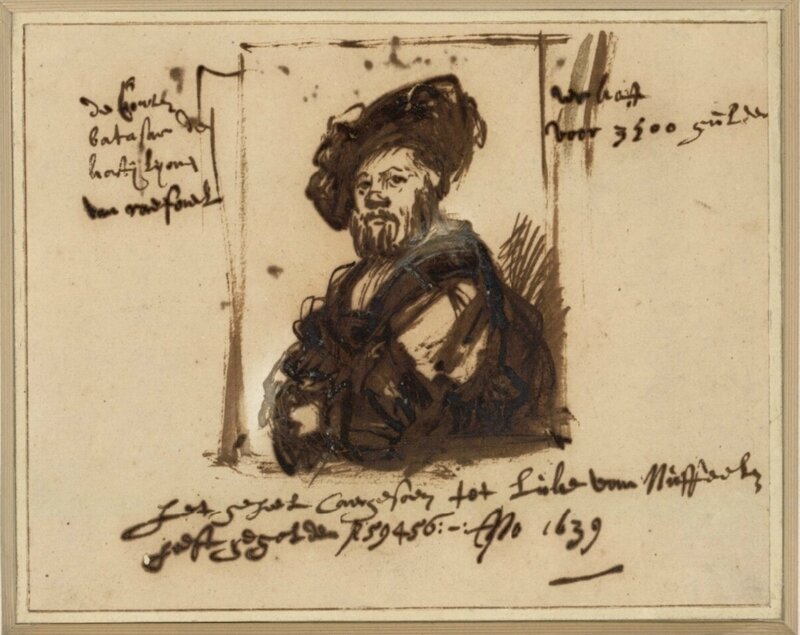 The Installation
During its residency at the Norton Simon Museum, Self Portrait at the Age of 34 is being viewed from the vantage point of Rembrandt’s works executed between 1630 and 1640 from the Simon collection. Hanging alongside earlier and later examples of Rembrandt’s paintings, as well as a number of his students’ works, the breadth of the artist’s painterly technique even within this decade can be examined.

Such is the case of the Portrait of a Bearded Man in a Wide-Brimmed Hat from 1633, now thought to depict Pieter Sijen (1592–1652), a wealthy Mennonite merchant. This is a pure portrait, not a tronie (or anonymous figure/type), but one depicting the stark, undecorated rigors of this religious group. The bearded man’s kindly stare and regard for the artist/viewer is consistent with Rembrandt’s other male portraits of the period, most of them directly addressing the viewer and revealing the depth of the sitter’s personality. Compare this with the Simon’s tronie by Jan Lievens, Rembrandt’s studio partner in Leiden: Young Man with Red Beret, ca. 1629–1630, is a character study that is magical and mysterious, underscored by the feather and the exotic, diaphanous shawl draped over his shoulders. But the Lievens is clearly not meant to be a pure portrait and is set apart from the mature, soul-searching meditations that Rembrandt produces in the later 1630s. 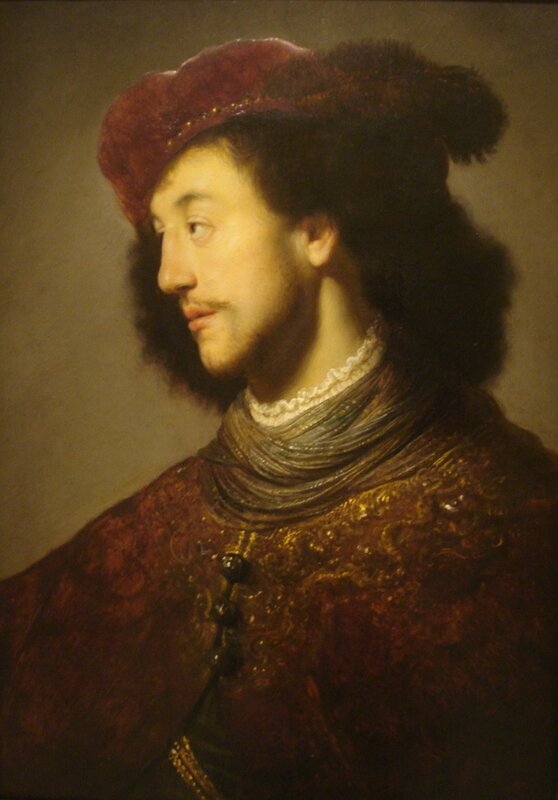 The London Self Portrait at the Age of 34, as well as the Simon’s own Self-Portrait from around 1636–1638, mark the artist’s full development in a personal as well as a professional sense. His growth during the portentous years 1630–1640 can be traced by the new frown line on his brow, his distinguished clothing and the keen, almost melancholic eyes that he himself saw as he gazed into a mirror.