PHILADELPHIA, PA.- Founded in 1887, the Penn Museum sent the first United States archaeological expedition to the Middle East—to the ancient Mesopotamian site of Nippur in what was then the Ottoman Empire. More than 130 years and hundreds of international expeditions later, the Museum remains a world leader in Near Eastern archaeology, with a collection of more than 100,000 artifacts; a leading collection of cuneiform tablets bearing early literary, historical, and economic texts; strong Islamic period ethnographic and literary collections; and a rich archive of historic documents, field notes, and photographs—as well as ongoing research projects in the region.

On April 21, 2018, the Penn Museum tapped into that collection and research expertise to open the new Middle East Galleries—a suite of galleries that invites the visitor to travel on a remarkable 10,000-year human journey, from life in the earliest villages and towns to increasingly complex cities. Nearly 1,200 objects from the Museum’s collections—including such world-renowned treasures as the crowning jewelry of a Sumerian queen from 4,500 years ago, the famed Ram-in-the-Thicket statuette, and one of the oldest known wine vessels in the world—are on view. Large-scale video projections, made to scale models, illustrator’s renderings of scenes from the reconstructed past, smaller interactive stations, and touchable reproductions provide diverse avenues to explore the collections and the stories they tell.

Set in 6,000 square feet of recently renovated gallery space, the Middle East Galleries are the first of the Museum’s upcoming signature galleries, a key feature of a Building Transformation campaign to be announced next spring. The goal: to transform the way that visitors experience the rich legacies of world cultures, providing a compelling interpretative context to better understand past civilizations and the ways they impact our lives today. Project information is online at penn.museum/transformation.

“It is especially fitting that we begin our Signature Gallery transformations with these new galleries. The story of how ancient Mesopotamian societies gave rise to the world’s first cities—cities not so very different from Philadelphia, America’s first World Heritage City—is one that we are uniquely qualified to tell,” said Julian Siggers, the Penn Museum Williams Director. “Urbanization and globalization continue apace today. With this signature exhibition, we are exploring how and why we got to where we are.”

“What’s remarkable about this story: by 2700 BCE, about 80% of Mesopotamians lived in cities. Today, 81% of U.S. citizens live in cities. What can we learn from the past?” noted Dan Rahimi, Executive Director of Galleries, who worked with a team of 10 curators on the gallery development. A Journey through Time
The Middle East Galleries explore the Penn Museum’s collections from the broad region between the Mediterranean Sea and the highlands of Afghanistan, from the Black Sea to the Arabian Peninsula, emphasizing diverse settlement sites now found in the contemporary countries of Iraq and Iran. Beginning with a more than 4,000-year-old human footprint discovered on an ancient mud brick used in construction at the royal city of Ur, the exhibition follows the expressly human journey through millennia—from village life in early settlements, to larger towns, to complex, multifaceted cities and their relationships with neighboring cities, emerging empires, and far-flung trade regions around the world.

The story is told through archaeological sites in the region excavated by Penn’s researchers: chief among them, Tepe Gawra (Iraq), Tepe Hissar (Iran), Ur (Iraq), Hasanlu (Iran), Nippur (Iraq), and the Islamic city of Rayy (Iran). Current research projects in the region are featured. From very early farming settlements to the end of the Ottoman Empire, the Middle East Galleries trace the rise of cities and urbanization.

Along the way, several key themes shape the evolving story, then as they do today: how landscape and environment affect settlement; trade and exchange; organization and diversification; technologies; and shared systems of religion and belief.

Some of the earliest artifacts in the exhibition are grindstones, hoes, and stone tools used for agriculture. From a house excavated at Hajji Firuz Tepe, circa 5400 BCE, in the highlands of Iran, six large clay jars were found with residue inside them; later chemical analysis confirmed that the jars each held about 2.5 gallons of wine—at the time, the earliest wine jars yet discovered. Another of the early sites excavated by the Penn Museum between 1927 and 1938, Tepe Gawra, provides a unique view of how people lived and developed before cities. A catastrophic fire in a battle circa 4400 BCE destroyed a two-story home dubbed the “White Building”—and provided archaeologists with a rich view of extended family life in this small town. A house model and interactive station provides visitors with an opportunity to see where objects were uncovered—including cooking pots, spindle whorls for weaving, and a child’s rattle—and what they tell about life before cities. Grave excavations unearthed gold ornaments, lapis lazuli beads, and stone vessels—all indications of increasing trade and growing wealth.

After 4000 BCE, settlement patterns began to change in southern Mesopotamia; diverse people speaking multiple languages, with increasing work specializations, came together to organize economic and social life, with laws, regulated trade, armies, and centers of worship. Early cities were born. From 1919 to 1938, Penn archaeologists led excavations to Tell Fara (ancient Shuruppak), Tell al-Ubaid, Kafajah (ancient Tutub) and Tell el-Muqayayr (ancient Ur). Early city artifacts appear in the archaeological record: temple offerings and gifts for the gods, clay tools (before metal), cylinder seals and sealings to protect property, and increasingly diverse pottery. The highland towns of Tepe Hissar and Tureng Tepe on the Iranian plateau, excavated in 1931 and again in 1976, rich in metal ores and strategically located on the east-west trade route, prospered as a region-wide network of trade emerged. Ur: The Great City
The Penn Museum/British Museum joint excavations to the Mesopotamian city of Ur, led by Leonard Woolley from 1922 to 1934, unearthed spectacular royal graves—including the tomb of the Queen Puabi, circa 2450 BCE. By the Third Dynasty of Ur 350 years later, kings were building the first monumental ziggurats. Bustling with more than 20,000 inhabitants, Ur had all the features of a city—a central administration, legal codes, monumental buildings, districts, suburbs, industry, a global trade network, art and music—and literature. Visitors are able to “meet” some of Ur’s citizens—including a merchant, a priest, and a stone cutter, at an interactive station. The dramatic tomb excavations at Ur form the visual centerpiece of the Middle East Galleries. On display from the intact tomb of Queen Puabi is an elaborate headdress and cape of gold and silver, carnelian, and lapis lazuli, as well as bowls, cups and jars of silver and gold for the Queen’s funerary feast. Other highlights from the excavation include a Bull-Headed lyre—one of the earliest musical instruments in the world—and the famous “Ram-in-the-Thicket” sculpture—once part of a piece of royal furniture. 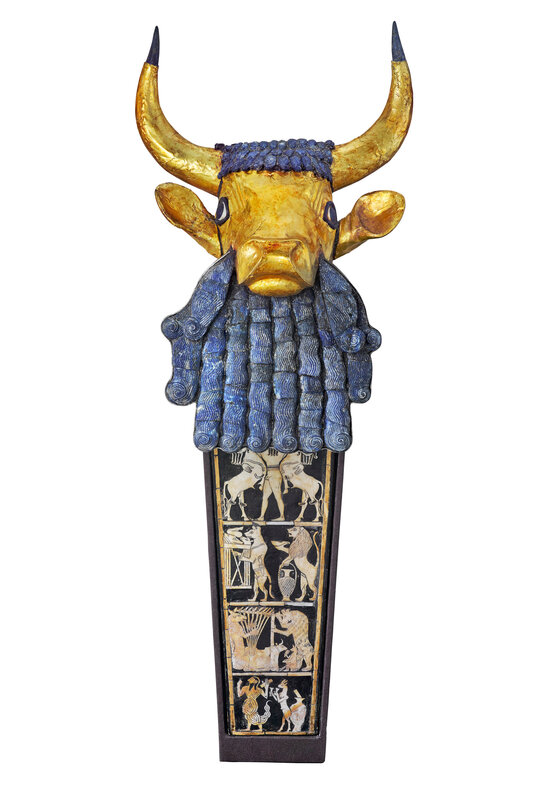 Six men and 68 women, royal attendants, were found in an extensive grave, dubbed “the Great Death Pit” by the excavator. It is believed they were bludgeoned to death and set to join their queen in the afterlife.

Penn Museum’s early excavations at Nippur uncovered thousands of clay tablets inscribed in cuneiform writing—and samples of early texts, including school practice texts that have preserved the most important collection of Sumerian literature in the world, offer insight into the ancient culture. A tablet containing part of the epic tale of Gilgamesh, divination tablets, and a tablet with the earliest known medical “prescriptions” are on display. The World of Cities
In a world with cities now firmly established, the final gallery considers the role of neighboring nomads, on the one hand, and the increasing complexities of urban life with the rise of competing empires. Penn Museum excavated the town of Hasanlu in Iran between 1956 and 1974. Located between the warring empires of the Assyrians and the Urartu, Hasanlu kept peace through careful diplomacy—until it was attacked and destroyed in a single day around 800 BCE. The fire that destroyed the city also preserved it for archaeologists.

A large and dramatic slipper coffin, used for burials of Parthian city dwellers at Nippur about 2,000 years ago, draws the visitors deeper into the gallery and later in time. Penn Museum excavations at Nippur, a center for both production and trade, revealed a nearly 6,000-year period of settlement, becoming part of the Parthian Empire about 2,000 years ago, and eventually part of the later Sasanian Empire. Protective incantation bowls with bound demons drawn upon them and inscriptions in Aramaic and Hebrew, once buried at the entrance to houses, are among the artifacts preserved from this time in Nippur. A later story of long urban settlement is told about the Rayy Plain on the rich Iranian plateau, where human activity has continued from pre-city times to the present day. Penn Museum excavations at Rayy in the 1930s uncovered materials from all periods, including the Islamic, first under the Umayyads, reaching a height of prosperity in the 11th century. Objects of daily life, from a set of cooking vessels to pharmacy jars, document life in the city. 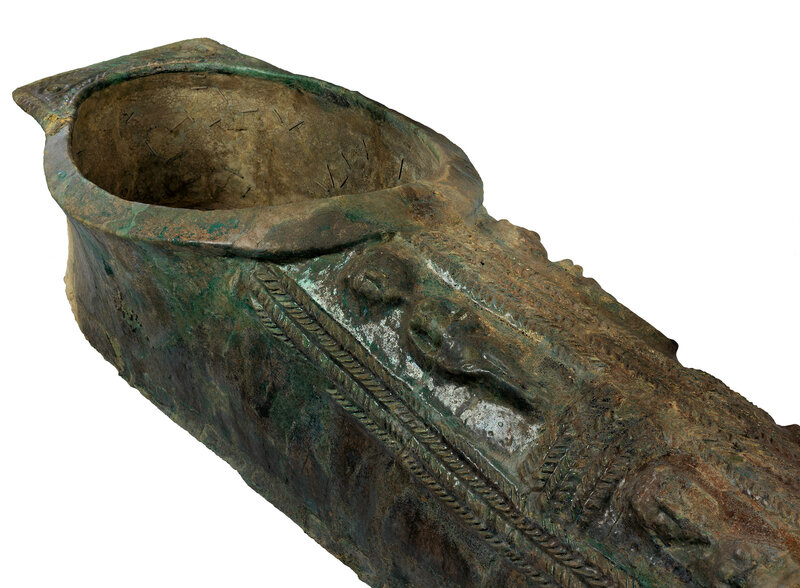 A display of Islamic period manuscripts, including folios from an illustrated copy of the beloved Khamsa written by Nizami, and an illuminated Qur’an, speak to the importance of religious and literary manuscript work. Glazed ceramics and stonepaste ware from the Ottoman period—influenced by the growing international interest in Chinese blue and white porcelain—exhibit high craftsmanship. Textiles of exceptional complexity were produced in the Ottoman Empire period as well, and rotating materials in this last gallery provide visitors with a chance to see rare samples of these delicate materials, products of urban craftsmanship and innovation.