A rare moulded and carved celadon-glazed 'Ruyi' vase and cover, seal mark and period of Qianlong (1736-1795)

A rare moulded and carved celadon-glazed 'Ruyi' vase and cover, seal mark and period of Qianlong (1736-1795) 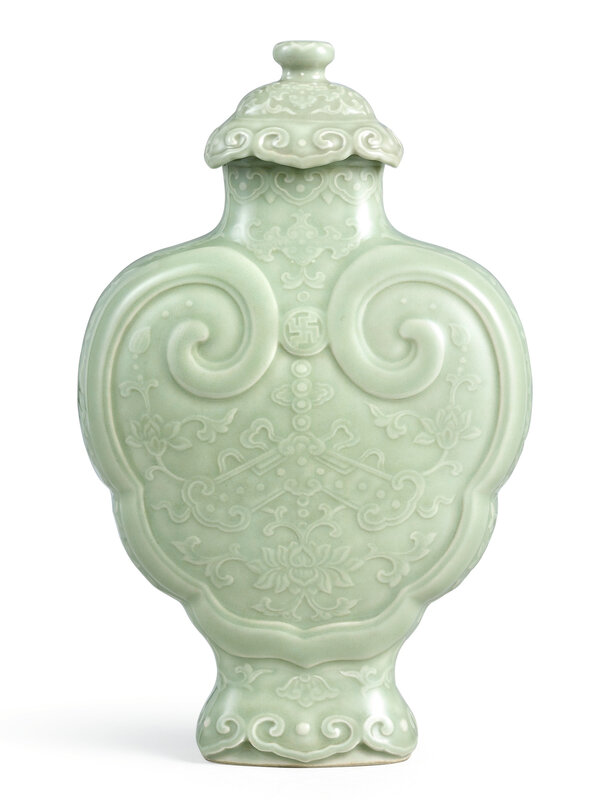 superbly potted with a flattened ruyi-shaped body, rising from a tall splayed foot moulded with a ruyi-shaped apron, and elegantly sweeping up to a rectangular waisted neck with everted rim, both faces carved in shallow relief within the scrolled ruyi border, depicting a beribboned musical chime (qing) tied on a beaded tassel suspended from a wan symbol, framed by meandering sprays of lotus blooms repeated on the narrow sides, all below stylised bats with outstretched wings around the shoulder and a band of ruyi heads at the rim, surmounted by a domed cover similarly decorated and also moulded with a ruyi-shaped apron, centred by an oval finial carved with a floret, covered overall in a pale sage-green glaze thinning on the raised areas and pooling in the recesses of the carving, the celadon-glazed base incised with a six-character seal mark.

Note: With its extremely rare form and meticulous execution, this celadon-glazed covered vase serves as a testament to the period of aesthetic and technological achievement in porcelain production when Tang Ying (1682-1756) was supervisor of the imperial kilns in Jingdezhen. Tang’s exposure to the imperial art collection during his youth enabled him to study celebrated masterpieces from the past and adapt them to the contemporaneous tastes of the Yongzheng and Qianlong Emperors under whom he worked. Not only does the covered vase demonstrate the innovation and skills of imperial Qing potters through its carefully composed structure and exquisitely detailed relief designs, it also incorporates ingeniously elements of China’s celebrated traditions through the use of a luminous celadon glaze – and acts as an embodiment of the Qianlong Emperor’s particular reverence towards the Song dynasty.

Ceramics with celadon glazes have been held in such high esteem since the beginning of their production in the Song dynasty and even within the Song dynasty alone there was evidence of a continuation of imperial taste and style from the Northern to Southern Song dynasties. By virtue of this longstanding admiration towards the celadon colour, new ways were ever developed to replicate the superb clear bluish-green tone and by the Yongzheng reign in the Qing dynasty particularly, the technique was revived and employed on smaller pieces – though very rarely coupled with relief decoration. The high quality of the raw materials and technological advancements developed at the imperial kilns at Jingdezhen during the 18th century undoubtedly enabled potters to develop innovative approaches aligned with the emperors’ preferences.

Superbly modelled with dramatic proportions accentuated starkly on each side with a ruyi apron, the vase is further applied a lustrous celadon glaze that has thinned and pooled on the raised designs and recesses, creating crisply defined designs and attractive contrasting tones. The carefully planned design of the vase, however, is far from one of mere aesthetic value – the repeated use of the ruyi motif as well as the combination of auspicious emblems are a response to the Emperor’s infatuation with portents of good fortunes. The central design of a bat suspending a musical chime amidst lotus flowers also forms the wish for ‘longevity fortune and happiness as high as the sky’.

The depiction of a musical chime suspending varying motifs is not uncommon on other moulded and carved celadon-glazed wares, though it is often depicted suspending the ‘double-fish’, for two Qianlong reign-marked examples, see a ruyi-handled vase, sold in these rooms, 8th October 2013, lot 202; and an octagonal vase adorned with an underglaze-blue and famille-rose central body, sold in these rooms 7th April 2015, lot 3616. Though the pairing of a bat and chime is rarely found on moulded and carved celadon wares, it is incorporated in other vessels of the period, including a Qianlong reign-marked famille-rose vase, sold in these rooms, 3rd April 2018, lot 3205. Vases of this form are extremely rare and no closely comparable example appears to be published other than its companion piece, sold in these rooms, 19th May 1982, lot 286.