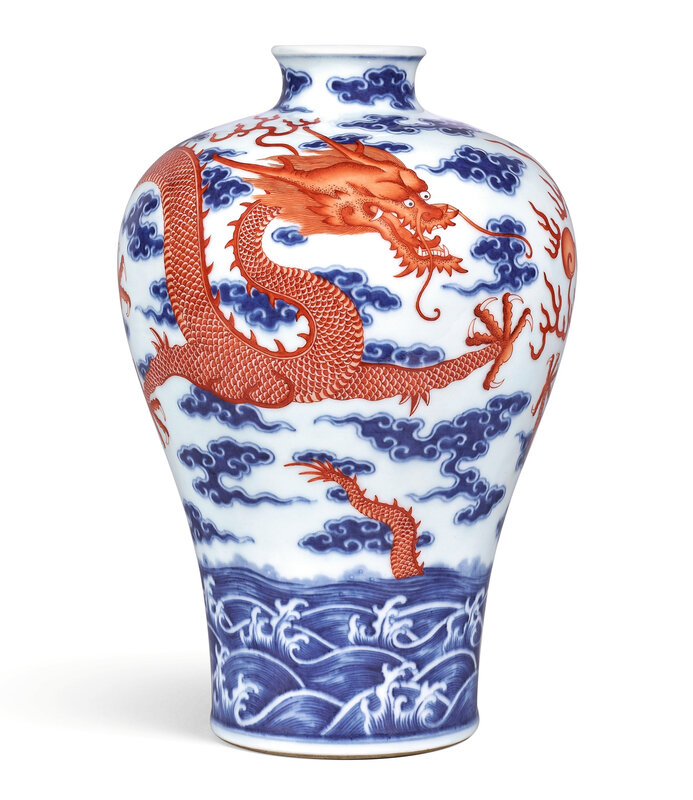 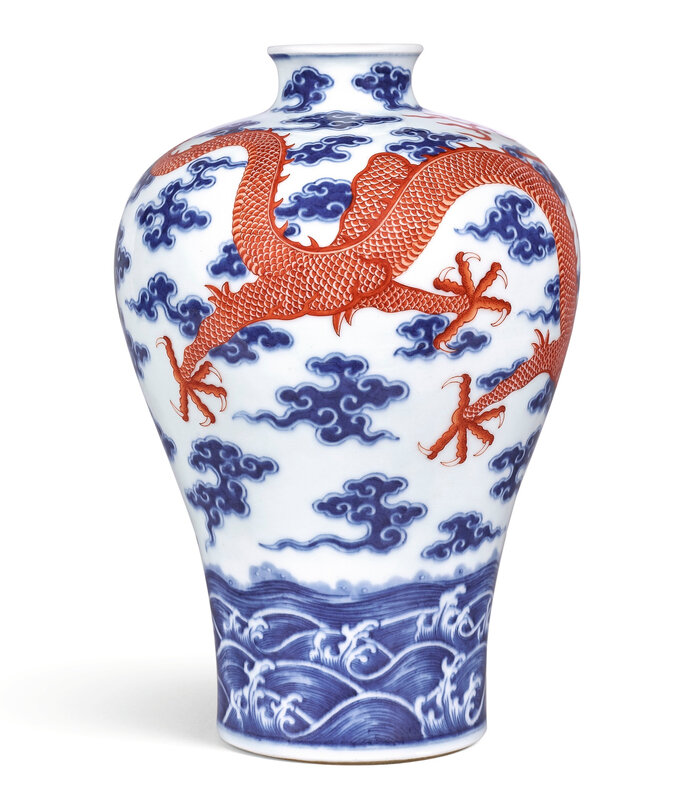 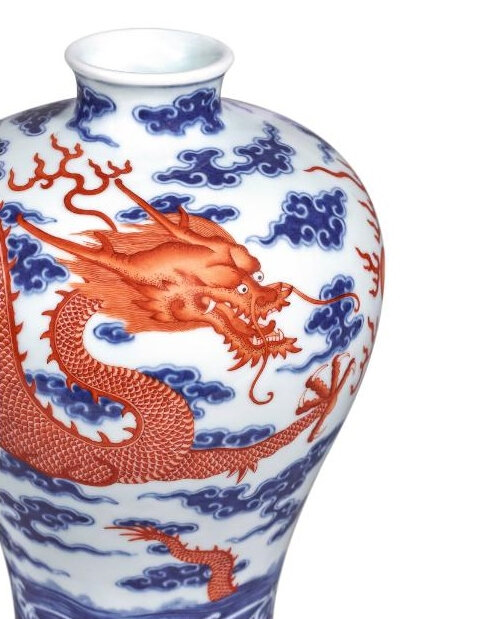 superbly potted with a tapering body sweeping up to a broad rounded shoulder surmounted by a waisted neck and everted rim, the exterior brilliantly enamelled in varying tones of iron red with two five-clawed dragons reaching for a central flaming pearl amidst flame wisps, one rendered larger and in a dominant position, portrayed writhing sinuously along the shoulder of the vessel, the other slightly subordinate and depicted with a more slender serpentine body with its tail emanating dynamically from the whirl-pool like waves bordering the lower body, each mythical beast skilfully rendered with a ferocious expression accentuated with piercing eyes and an open mouth revealing its teeth and tongue, the windswept mane and scales meticulously defined, all against a ground of cobalt-blue ruyi clouds, the recessed base inscribed with a six-character seal mark.

The present vase is exceptional for its elegant meiping form, flawless potting and impressive painterly decoration of two dragons, a larger and a smaller beast, writhing between clouds with mouths wide open and eyes intently gazing at the ‘precious pearl (baozhu)’ also known as the wish-granting or flaming pearl. The vase is a fine example of an imperial blue and white ware decorated with iron-red enamel over the glaze. The design of two dragons pursuing the luminous pearl is more familiar from contemporaneous textiles, especially costumes from the Manchu court, such as the jifu (semiformal robe) worn by the Qing emperors, that were intricately woven with renditions of the Chinese cosmic order of sky, water and earth with its many representative symbols. The adaptation of the motif to a meiping, such as the present vase, is less frequent. A better known version of the design depicts not two but nine five-clawed dragons, captured in varied poses amidst tumultuous rolling waves, painted in underglaze copper-red on a blue and white porcelain, as seen on a Yongzheng period (r. 1722-1735) meiping sold in these rooms, 7th May 2012, lot 579. The Yongzheng meiping possibly served as the blueprint for later, Qianlong period (r. 1735-1796) examples, a number of which may be found in museums and private collections. See a Qianlong mark and period meiping with the nine dragon design in the Palace Museum, Beijing, illustrated in The Complete Collection of Treasures of the Palace Museum: Blue and White Porcelain with Underglaze Red (III), Shanghai, 2000, pl. 205; and another in the Royal Ontario Museum, Toronto, is published in the T.T. Tsui Galleries of Chinese Art, Toronto, 1996, pl. 124. Another related blue and white meiping in the collection of the Palace Museum, on which the nine dragons are painted in the arresting tone of iron-red over the glaze, is published in Kangxi. Yongzheng.Qianlong. Qing Porcelain from the Palace Museum Collection, Hong Kong, 1989, pl. 8 (fig. 1). The accomplished use of the brush and masterful execution of every detail seen on the dragon figures, the attention paid to the their vivid facial expressions, their flowing mains and undulating scaly bodies, combined with the aesthetic richness of the background setting of clouds and waves, indicate aesthetic qualities associated with imperial masterpieces made for the Qianlong Emperor. To fully appreciate the importance of this striking vase it is helpful to understand the meaning and symbolism of its decoration. A large dragon in the company of a slender smaller dragon, usually facing each other, in the Chinese decorative repertoire suggest an older and younger dragon, possibly father and son, as expressed in the proverb ‘canglong jiaozi’ which translates as ‘the old dragon teaches his son’. For a detailed explanation of this motif see the essay on the turquoise-ground ‘dragon’ tianqiuping in this sale, lot 3614. However, the composition on this vase convey’s an additional important meaning to the well known ‘father and son’ subject matter, derived from the Daoist mythological tale of the two Azur Dragons (qinglong) being gifted the pearl of wisdom.1 The Chinese saying, ‘xuanglong qiangzhu’, which translates as ‘a pair of dragons contending over a pearl’ evokes this popular tale which may have served as the inspiration for the decoration on this vase.

According to the legend, while bathing in the Heavenly Lake (tianchi), a group of young immortal maidens were attacked by a bear-like creature. However, they were swiftly rescued by a pair of Azur Dragons (qinglong) who were engaged in the Daoist practice of ‘Cultivation and Transmutation (xiulian)’ in the waters of the lake.2 When the maidens told Xiwangmu, the Queen Mother of the West, what had happened, she rewarded the two dragons with a single pearl, the embodiment of spiritual essence and energy (also known as the qi) and the representation of wisdom and truth. The pearl was to help the dragons with their spiritual and physical xiulian practice. Although there was only one pearl to share between the two dragons, they did not fight or compete for it but went out of their way to make sure that the other benefited from the miraculous powers of the pearl. Thus the pearl, shining brightly, always floated rising and sinking between the two dragons.

The Jade Emperor (Yuwang Dadi) seeing the harmony created between the Azur Dragons, and their efforts at cultivating themselves, was so impressed and moved that he sent his minister, the Lord of the Great White Star (Taibaixing jun), with the gift of another pearl so that each dragon could have its own precious aid. The legend has an auspicious ending in which the two dragons eventually found the Way (Dao) and attained immortality. From then on, they helped people, bringing rain in times of drought and ensuring everyone was properly fed and clothed, and did not suffer any hardship. In gratitude and to show veneration, people erected shrines to celebrate and make offerings to the dragons. Thus the dragons came to be honoured and worshipped, becoming one of the most auspicious symbols in Chinese art. Bearing the above legend in mind, artisans working at the Imperial kilns at Jingdezhen under the tutelage of China’s most famous Superintendent Tang Ying (1682-1756), combined two inspirational sources, the father educating his son and the two together in pursuit of all the meritorious qualities represented by the pearl. The large dragon most likely represents the Qianlong emperor and the younger dragon his son, Prince Yongyan, the future Jiaqing Emperor (r. 1796-1820).

The symbolism of the pearl merits more discussion. At one level it represents spiritual energy and truth, this luminous object, usually rendered as a red or white sphere ringed by a fiery blaze, is also associated with the teachings of early Daoism where it represented the ‘sacred pearl of perception (yang energy)’. It is also a reference to the spiritual and physical cultivation of the body and soul (shen) which encapsulated the heart and mind (xin). The Chinese term translated as ‘mind’ uses the character ‘heart (xin)’, as in ancient times it was believed that the heart (and not the brain) functioned as the thinking organ that made judgements and was the seat of both affection and cognition.3 The pearl also became associated with the teachings of Buddhism, in its significance as representations of wisdom and enlightenment. In Chinese art the dragon is the ultimate symbol of imperial authority. Thus the dragon and the pearl together convey the idea of the emperor as the embodiment of the ultimate wisdom and truth. The message conveyed in the decoration of this vase is complex. Although the associations and meanings of the two dragons and the pearl would have been familiar to everyone, the maker of this vase has skilfully created a ‘new’ design using the above mentioned two popular sources.

While no other similar vase to the present piece appears to be recorded, see a miniature underglaze-red Qianlong mark and period meiping painted with two five-clawed dragons amidst clouds and bats, with one beast partially rising from crested waves, from the collection of W.W. Winkworth, sold in our London rooms, 12th December 1972, lot 102, and later in the collection of F. Gordon Morrill, New York, included in 1973 exhibition at the Museum of Fine Arts in Boston. Compare also a bottle form vase with a Qianlong reign mark and of the period, decorated in iron-red with a single large dragon reaching for a flaming pearl, sold in these rooms, 5th October 2016, lot 3302.

1 The Azur Dragon of the East is one of the Four Constellations that may be seen in the sky at night together with the Vermillion Bird of the South, the Black Turtle of the North and the White Tiger of the West. It symbolises protection and in ancient texts it has been reincarnated as famous warriors. It is also associated with the season of Spring and the Daoism element of Wood.
2 Xiulian is a type of Daoist neidan or esoteric physical, mental and spiritual practice to prolong life and create an immortal spiritual body.
3 See Roel Sterckx, Chinese Thought: From Confucius to Cook Ding, London, 2019, p. 169.