the elaborately carved cinnabar-red lacquer saddle decorated with exquisite peony blooms all naturalistically rendered, reserved against a leiwen ground, the saddle tree similarly decorated, the back end of the tree attached with two gilt-bronze floral buckles securing short leather straps, the top of the saddle edged in bronze with finely chased floral scrolls picked out in gilt, opposite a finely incised floral gilt-bronze band covering the lower lip of the saddle, all below a brown velvet saddle cushion held in place by four gilt-silver dragon buttons, all attached to leather stirrup straps suspending a pair of gilt-bronze stirrup irons decorated with florets, the leather saddle blanket trimmed with green-tooled foliate medallions and trefoil borders, the bridle studded with gilt-bronze reinforcements, attached to an iron bit, all led by purple silk reins and further decorated with a pair of scarlet-dyed horse hair tassles, stand, (7) - saddle with stirrups: 77.5 by 53.5 by 43cm., 30 1/2 by 21 by 17 in. saddle blanket: 77. 5 by 75.5cm., 30 1/2 by 29 3/4 in. - Lot Sold: 1,040,000 HKD 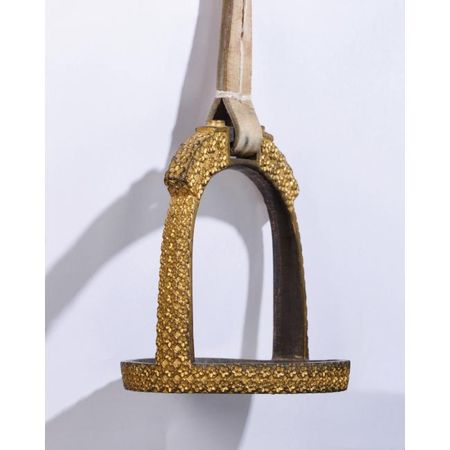 NOTE: Rulers of the Qing dynasty were known as Mashang Tianzi or 'Emperors on Horseback'. They were exceptionally skilled in riding, hunting and archery. The Manchus in general had a long tradition of equestrian excellence and the Qing cavalry was a key force in the expansion and the protection of the empire. Although saddles were made in great quantity, only a small number appear to have survived in good condition. Imperial saddles are rare and even rarer are those complete with a bridle, stirrups and all necessary trappings. The present saddle is most unusual for its use of carved lacquer. The carving is especially deep and in its style is comparable with carvings found on Imperial lacquer wares such as the cinnabar lacquer dish carved with floral sprays illustrated in Carved Lacquer in the Palace Museum, Beijing, 1985, pl. 359. It is interesting to note that the floret decoration of the stirrups is a decorative motif frequently found on lacquer wares as well. For example see a lacquer box decorated with similar florets, in the Palace Museum, published in Zhongguo qiqi quanji, vol. 6, Fuzhou, 1993, pl. 243. This would suggest that the stirrups were designed in the lacquer workshop together with the saddle.

Saddles were generally made of wood decorated with a gilt-bronze edge and fitted with a velvet saddle cushion. See a wooden saddle covered with gilt-bronze ornaments, from the Qing court collection and still in Beijing, included in the exhibition China. The Three Emperors 1662-1795, the Royal Academy of Arts, London, 2006, cat. no. 69. Yuan Hongqi in his notes to the Palace saddle, ibid., p. 406, mentions that 'among the twenty-four imperial Palace Workshops (Zaoban chu) set up in the imperial palace, one was given over to the production of saddles for the Emperor'. Another saddle made of wood and leather with decoration in cloisonne enamel, together with its matching bridle and stirrups, from the collection of the International Museum of the Horse, was included in the exhibition Imperial China. The Art of the Horse in Chinese History, Kentucky Horse Park, Lexington, 2000, p. 170, cat. no. 164, where it is mentioned that 'the complete saddle was originally purchased from a descendant of a Mongolian noble family who stated that it was presented to their ancestors by the Qing Emperor for meritorious military service. To protect the saddle from destruction by the Red Guards during the Cultural Revolution, the saddle was painted red. Traces of this paint are still visible on the underside of the saddle tree.' 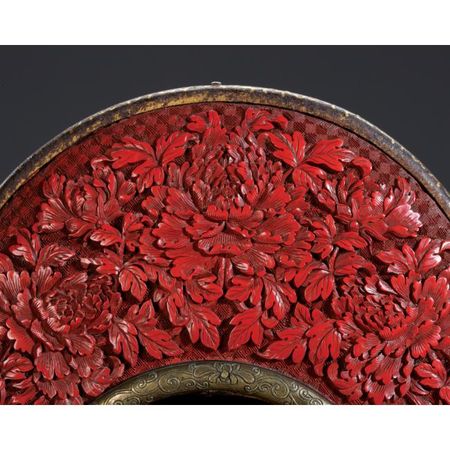 The Manchus embraced hunting and archery which were both important aspects of their nomad origins. Qianlong himself was a skilled archer and spent a month every year at the summer retreat at Chengde, visiting the hunting preserve at Mulan. Hunts also provided the opportunity for camaraderie with the Qing court's Inner Asian subjects and allies, who were regularly invited to join Manchu hunts and festivities. Hunts became glorified showcases where the emperor was able to demonstrate his skills and bravery, and also to uphold a political message of the importance of Manchu traditions. It is not surprising that saddles of elaborate designs and materials were made on imperial order for these special occasions. A painting by Giuseppe Castiglione titled The Qianlong Emperor Hunting Hare, in the Palace Museum collection and included in the Royal Academy exhibition, op.cit., cat. no. 26, depicts the emperor seated on a saddle fashioned from precious materials and of the finest workmanship.

The Qianlong emperor also conducted his inspection tours to the north and south of the nation on horseback. It is known that until he became quite old, it was his preferred means of transportation. Paintings depicting his inspection tours, such as the scroll painting by Xu Yang titled The Qianlong Emperor on the First Inspection Tour to the South, Scroll 12: Return to the Forbidden City, from the Palace Museum and included in the exhibition Splendors of China's Forbidden City. The Glorious Reign of Emperor Qianlong, The Field Museum, Chicago, 2004, cat. no. 112, shows the extraordinary nature and size of these tours with tens of thousands of riders on horseback.

Riding saddles and stirrups are rarely offered at auction, although a pair of cloisonné enamel stirrups of the Qianlong period was sold in our London rooms, 13th July 2005, lot 216. Another pair of cloisonné stirrups is illustrated in Gunhild Gabbert Avitabile, Die Ware aus dem Teufelsland, Hannover, 1981, pl. 64; and a pair of gilded iron stirrups decorated with dragons, excavated at the outskirts of Xi'an, Shaanxi province and now in the collection of the Shaanxi History Museum, was included in the Lexington exhibition op.cit., cat. no. 162.