Wassily Kandinsky @ The Lenbachhaus in Munich

Wassily Kandinsky @ The Lenbachhaus in Munich 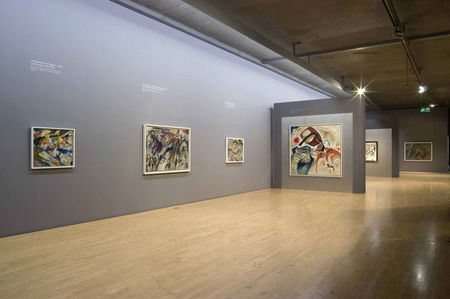 This large and ambitious retrospective includes some 95 paintings from all the important periods of Kandinsky’s oeuvre.

MUNICH.- The Lenbachhaus in Munich, the Centre Pompidou in Paris and the Guggenheim Museum in New York are the three museums worldwide that hold the largest collections of works by Wassily Kandinsky. Together these three museums organized a large joint show on this outstanding modernist artist and founder of abstract painting.

This large and ambitious retrospective includes some 95 paintings from all the important periods of Kandinsky’s oeuvre, with the collections of the three participating museums complementing each other perfectly. While the Lenbachhaus draws on the outstanding collection of works from Kandinsky’s Blue Rider period from 1908 to 1914 donated by Gabriele Münter, the focus of the collection at the Centre Pompidou is on the artist’s output during the Russian Revolution and his Bauhaus years from 1917 to 1933, although it is also in possession of some extraordinary works from the Paris period donated by Nina Kandinsky. Finally, thanks to the purchases made by Solomon R. Guggenheim and Hilla Rebay, the exhibition also features a number of Kandinsky’s late works produced in Paris between 1933 and 1944, together with several of the early Expressionist gems now held at the Guggenheim Museum in New York.

The coming exhibition is based on an unprecedented number of paintings of great variety from each of the three participating museums. To be able to shed light on the role Wassily Kandinsky (1866–1944) played as both a pioneer and theorist of abstraction, the organizers intend to bring together only those major, large-format works that were crucial to his development, and hence to focus the show on some of the very best examples of work he produced when at the height of his powers.

In addition to an ideal selection of the best works from the three aforementioned collections, the show also includes some magnificent loans from Moscow, Nizhny Novgorod, New York, Washington, Philadelphia, Basel, all chosen so as to present Kandinsky’s series of large-format “Impressions,“ “Improvisations,” and “Compositions” as comprehensively as possible.

By bringing together three separate collections never before loaned on such a vast scale, this first—and to date only— collaboration between the world’s three largest Kandinsky museums provides a unique opportunity to experience the artist’s work more directly and more intensively than ever before, and to review the periods he spent in Moscow, Munich, and Paris, and his collector contacts in America. It also constitutes an unprecedented opportunity for international cooperation between major museums.

For the Lenbachhaus, this Kandinsky retrospective represents a new high-water mark in its role as exhibitor of treasures by the Blue Rider group, as well as enabling it, for the first time on these premises, to show Kandinsky in a larger context encompassing even the late works of 1942. It is also the last major show to be held at the Lenbachhaus before it closes for the modernization work due to commence in March 2009, immediately after the exhibition finishes.